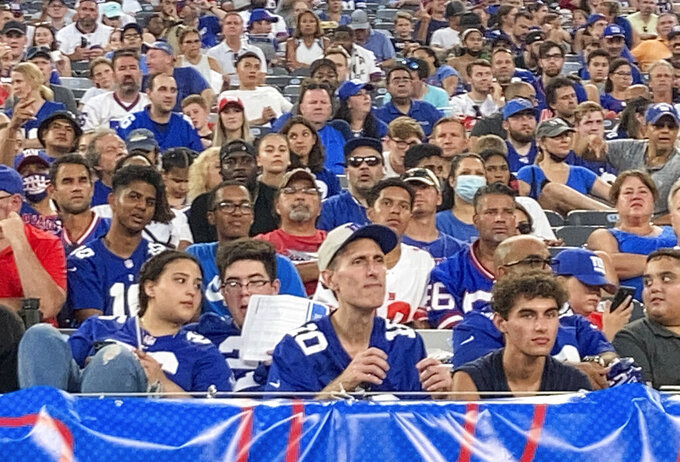 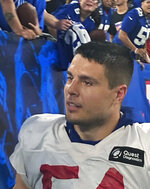 EAST RUTHERFORD, N.J. (AP) — For the first time since the end of the 2019 season, the New York Giants played in MetLife Stadium in front of their fans.

It was just a training camp practice, but it was obvious it meant a lot for the players and fans to reconnect after the 2020 NFL season was played with games here in front of 78,000 empty seats because of the pandemic.

The Giants distributed some 50,000 tickets to fans who requested them, and the team said just under 29,000 people attended the so-called Fan Fest.

The fans cheered when the roughly 90 players and coaches walked on the field. They roared for big plays and a couple of touchdown passes, including one from starting quarterback Daniel Jones to running back Alfred Morris.

The Giants had a practice in the stadium before last season started, but it was only attended by the media. Noise was piped in to simulate a crowd.

“I can’t believe you know how much different this year than last year,” Judge said after the practice. “It’s a complete 180. I mean, you remember last year we came out here a few weeks after this and we had that blue-white game, and we’re trying to simulate everything we can do for a game. The crowd or the crowd noise, the pregame warm up. Everything was really as much effort you put into that. I mean in one night and something like this just completely brings it full circle.”

After the practice ended, the players threw tee-shirts into the stands and signed a few autographs. Many players encouraged the fans to cheer or led cheers, like defensive linemen Leonard Williams, B.J. Hill and Niko Lalos.

One of the more common sights in the crowd was fans waving a cardboard roster in front of their faces. The temperature was 90 when the practice started and National Weather Service had an excessive heat warning in effect.

The fans showed they had a good memories, too. When tight end Evan Engram dropped a pass — like he has done many times in recent seasons — the boos quickly erupted.

The Giants will resume practice on Thursday - all alone - and return here on Saturday night for their annual preseason game against the New York Jets, their co-tenant at MetLife.

There were no preseason games last season. The Giants posted a 6-10 record in Judge's first season as coach, finishing second in the weak NFC East.

The season opens Sept. 12 with a home game against Denver.

McIntosh was fifth-round draft choice in 2018. He in a total of 18 tackles, making 18 tackles and two sacks.

Qualls played six games for Philadelphia in 2017 but has played since.

Dillon spent most of 2020 on the Giants' practice. He got an injury settlement in being released.

NOTES: Judge wasn't concerned about the right arm injury OT Nate Solder sustained in practice Tuesday, but noted he was seeing doctors to make sure. ... Halfway through practice Williams put his hand to his ear in the end zone and waved a towel trying to encourage the fans to cheer.