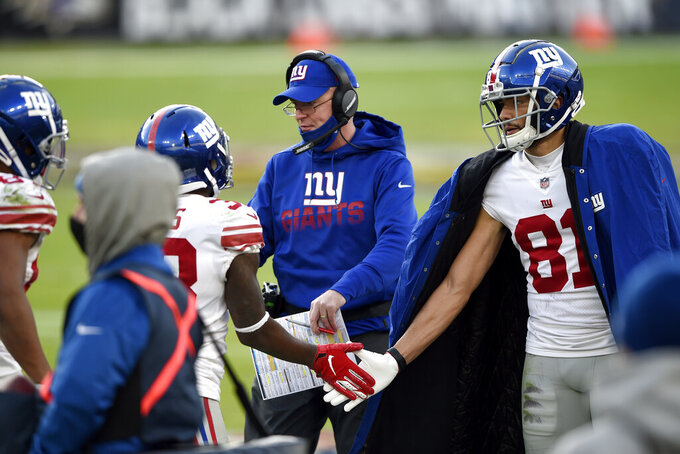 New York Giants offensive coordinator Jason Garrett, center, greets players on the sideline after a touchdown against the Baltimore Ravens during the second half of an NFL football game, Sunday, Dec. 27, 2020, in Baltimore. (AP Photo/Gail Burton)

With a 5-10 record and a three-game losing streak heading into the final weekend of the regular season, it can be said without reservation the New York Giants don't deserve to be in the playoffs.

This is 2020, though, and we are talking about the NFC East, the division that has been held up to ridicule all season.

So yes, the Giants still have a shot at making the playoffs. So do the Washington Football Club (6-9) and the Dallas Cowboys (6-9). The Eagles (4-10-1) are out, although they will have a say in who wins the division

So who goes to the postseason?

Washington has the most direct path to the title. If it beats the Eagles on the road on Sunday night, it wins the division. If it ties, it would need New York to beat Dallas to claim the title. Otherwise, Dallas wins.

The winner of the Cowboys-Giants game at MetLife Stadium on Sunday afternoon gets the playoff spot if Washington loses.

Any way you look at it, a team with a losing record is going to make the playoffs.

“I don’t think the record is the biggest thing to look at," Giants linebacker Blake Martinez said Monday. “I think you look at a team on how they progressed throughout the season and how they’re improving. Once the playoffs start, it's 0-0. You continue to win, you keep going. You can be a team that’s 16-0 and lose the first game and you’re out. You can be a team that’s, like you said, 6-10 and win all the way through. And you keep going.”

On the train ride home from Sunday's 27-13 loss in Baltimore, coaches and players watched the results from the later games that kept the Giants in the playoff race: Carolina's win over Washington and Dallas' victory over the Eagles.

Rookie coach Joe Judge spoke with the team after the return to the Meadowlands.

“When we got back, I did grab the team and just kind of let them know what the situation is, but really reaffirm the importance of staying focused on Dallas," Judge said. “That’s all we can control.”

The Giants had control of their chances after beating the Seahawks in Seattle earlier this month. Since then, they have shown very little in losing to Arizona, Cleveland and Baltimore.

They now have one more chance to make a positive statement and try to make the playoffs for the first time since 2016.

“I think our coaches said it best,” Martinez said. “I think they said you always want to have meaningful December football games. Obviously, this game will be in January, meaningful January games. So to be able to have, that's what every competitor, especially in the NFL, wants.”

Not much. The offense was limited to 269 yards and had one play for 20 yards, a pass to Dante Pettis. The defense gave up 432 yards. Special teams allowed an average of 18 yards on two punt returns. Not winning football.

The return of QB Daniel Jones and offensive coordinator Jason Garrett (COVID-19) didn't jump-start the offense. New York has scored 26 points in the three-game losing streak and 43 in the four games in December.

Rookie safety Xavier McKinney was on the field for 46 plays and had eight tackles, which tied for second on the team with defensive back Logan Ryan and linebacker Tae Crowder. Martinez had a team-high 12 tackles.

Rookie Matt Peart got some time at right tackle in the second half for Cam Fleming and looked lost. There was one series when Jones was sacked on three straight plays as the Raven blitzed, showing twists and stunts. New York gave up six sacks in the game.

After missing the Ravens game with a calf injury, wide receiver Golden Tate has a chance to play. Tight end Evan Engram left the game late with an ankle injury and his status for this weekend is uncertain. Jones came out of the game without reinjuring his ankle or hamstring.

2-7 — For the first time in NFL history, a team that started the season 2-7 will make the playoffs. The only question is will it be the Giants, the Cowboys or Washington?

The Giants play Dallas, and then the waiting game starts for the Washington result.