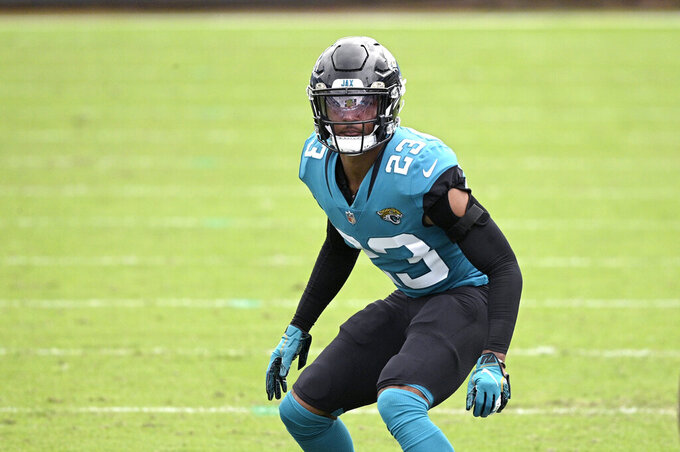 FILE - Jacksonville Jaguars cornerback CJ Henderson (23) follows a play during the second half of an NFL football game against the Houston Texans in Jacksonville, in this Sunday, Nov. 8, 2020, file photo. Henderson hasn't been the same since a shoulder injury last October. New coach Urban Meyer raved about Henderson’s rehab in March and said “we’re counting on him.” But Meyer’s faith in Henderson seems to be waning. (AP Photo/Phelan M. Ebenhack, File)

JACKSONVILLE, Fla. (AP) — CJ Henderson’s NFL debut was better than anyone anticipated. The rookie cornerback and ninth overall pick in the 2020 draft had five tackles and three pass breakups, including an interception and a fourth-down swat in the final minute that sealed Jacksonville’s lone victory last season.

Henderson looked like a budding star, a surefire upgrade from veteran A.J. Bouye and quite possibly an adequate replacement for Jalen Ramsey.

It turned out to be just a blip.

Henderson injured a shoulder three weeks later and hasn’t been the same since. He played through pain but landed on injured reserve in mid-November because of a strained groin. He missed half the year and needed labrum surgery in the offseason.

Now, though, it seems like Meyer’s faith in Henderson is waning.

Henderson tested positive for COVID-19 when he reported to training camp last month and sat out 10 days. He returned briefly last week before missing Sunday’s open scrimmage in front of more than 15,000 fans at TIAA Bank Field. Meyer said Henderson’s absence was for “personal reasons” and responded “I don’t know” when asked whether the second-year pro would be able to overcome his current circumstances.

The only thing clear about Henderson’s situation is the Jaguars had concerns months ago despite what Meyer said publicly. Jacksonville gave cornerback Shaquill Griffin a three-year, $40 million deal in free agency, re-signed former starters Tre Herndon and Sidney Jones and then drafted Georgia cornerback Tyson Campbell with the first pick in the second round.

“Tyson Campbell is a very fast guy,” Meyer said Sunday. “He never panics because he’s got elite speed, and he’s been really good. … We’re glad we got him.”

Henderson was one of the fastest guys at the NFL combine in 2020. He covered the 40-yard dash in 4.39 seconds and was ranked higher on some draft boards than Ohio State cornerback Jeff Okudah.

The Jaguars had no red flags on Henderson, a three-year starter in nearby Gainesville who finished his college career with 93 tackles, 22 pass breakups and four sacks. And Jacksonville coaches raved about his work ethic as a rookie.

But Henderson raised eyebrows by going on a late-night Twitter rant from a McDonald’s early during 2020 training camp – he missed a few practices afterward because of an “illness” – and didn’t speak to the media until his performance in the opener.

He’s hasn’t been made available since, either.

Meyer appeared to be trying to motivate Henderson during his camp debut last week. Henderson peddled a stationary bike near the end zone and directly in front of teammates, an unusual setup, and then went through conditioning drills with strength coach Anthony Schlegel shadowing his every move.

Henderson missed practice two days later, showed up Saturday and then was absent again Sunday. When and if he returns – and for how long – remains to be seen.

“It’s tough when you miss that many days,” assistant head coach and linebackers coach Charlie Strong said. “Now you got to get out here and once we get him out here … he has been in the meetings and he is in the meetings. But it’s more now that he has missed the work on the field, so that’s where he has to get caught up.”