On the hook: Angels' Trout still fantasy commish, for now 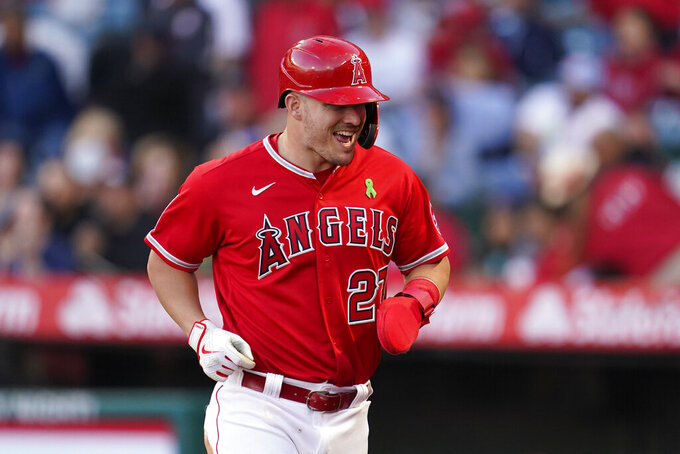 Los Angeles Angels' Mike Trout (27) runs to the dugout after scoring off of a single hit by Jared Walsh during the first inning of a baseball game against the Tampa Bay Rays in Anaheim, Calif., Tuesday, May 10, 2022. (AP Photo/Ashley Landis)

NEW YORK (AP) — Mike Trout’s future, he admits, is very much in doubt.

Not as a baseball great. As the commissioner of a fantasy football league that’s suddenly gotten a lot of attention.

“Am I going to resign? I haven’t made that decision,” the Los Angeles Angels star said Wednesday, laughing.

“But every commissioner I know always get booed,” he said.

The bizarre saga began last Friday when Cincinnati outfielder Tommy Pham slapped San Francisco outfielder Joc Pederson before a game. Pham later said it was over a fantasy football dispute, and he was suspended three games by Major League Baseball.

This week, Pham added another strange twist when he said Trout ran their football loop.

“Trout did a terrible job, man,” Pham told The Cincinnati Enquirer. “Trout is the worst commissioner in fantasy sports.”

“I talked to Tommy, I talked to Joc, everybody that was part of it,” Trout said, hours before a night game at Yankee Stadium was rained out. “Just passionate about fantasy football.”

Pederson claimed Pham blamed him for cheating by making an illegal move with an injured reserve spot, costing the Reds player significant money.

Trout said he wasn’t going to referee that one in public.

“It’s in the past,” the three-time AL MVP said, adding, “it’s a legendary fantasy football league, for sure.”

“It’s just one of those things, everybody’s competitive. Everybody loves fantasy football. Who doesn’t?” he said.

MLB has strict rules about betting involving baseball games, but no rules against other sports as long as the gambling is legal – as in, no bookies.

“Listen, guys, love it. I get it. And I did,” he said. “You get absorbed and during the week you have to make all these transactions, which really gets annoying because all you’re doing is you’re buried in the newspapers or the — at that time, it was magazines. You had to buy all the magazines. I love fantasy football, but I will not — but I’ll never do it again.”

“It absorbs you way too much. And the bad part about fantasy football is you start rooting for players on teams other than the team that you actually root for, and that’s when you have to stop doing it. When I started rooting against the Cardinals and when the particular player on my team’s playing, that’s when I knew I had to quit," Maddon said. “And I did, about 1999, 2000, something like that.”