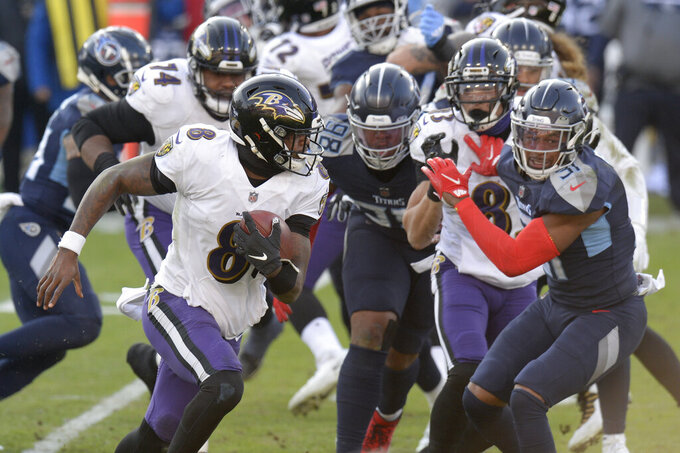 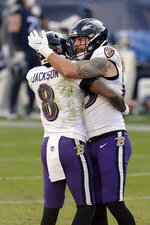 Lamar Jackson and the Baltimore Ravens put on another display of resilience in Tennessee, opening the playoffs by coming from behind to beat the Titans.

Jackson used his deft running ability and efficient passing arm Sunday to finally win a playoff game after starting his career with successive postseason defeats. He was backed by a strong defense that shut down star running back Derrick Henry and limited the Titans to a field goal over the final 46 minutes of a 20-13 victory.

Now it’s on to Buffalo, and underdog Baltimore won’t be lacking confidence Saturday night in its effort to knock off another division winner and advance to the AFC title game.

After overcoming a midseason outbreak of COVID-19 and a three-game skid that left them with a 6-5 record, the surging Ravens (12-5) have won six in a row.

Jackson, the reigning NFL MVP, overcame an early interception to rally the Ravens to their first playoff victory since 2014. Jackson ran for 136 yards, including a game-changing 48-yard touchdown in the second quarter and the clinching 33-yard run with 1:37 left.

Not long after that, the Ravens celebrated the victory by foisting a game ball into the hands of their relieved and redeemed quarterback, whose 0-2 record in the postseason was a hot topic in the days leading up to the game.

“I know it’s a team game, but it seems like whenever it’s a loss, it’s always just his fault," Ravens cornerback Marlon Humphrey said. “So, it was great in the locker room. Guys were happy.”

Jackson sparked a running game that amassed 236 yards, and he shook off five sacks to go 17 for 24 for 179 yards. If he can play similarly against the Bills, then the Ravens have a shot at pulling off an upset.

That Baltimore is in this situation after enduring a COVID-19 breach that attributed heavily to a stretch of four losses in five games made Sunday's victory particularly sweet, especially after the Ravens bowed out quickly last season after bringing a 14-2 record into the playoffs.

“It's worth dwelling on a little bit," coach John Harbaugh said Monday, “but right now we just don't have time to do it."

The defense limited Henry to 40 yards on 18 carries, and the Titans could only muster 209 yards after scoring 30 points in an earlier meeting between the teams.

Henry's longest run was an 8-yarder, and he averaged 2.2 yards per attempt.

The Ravens could use a few more viable targets for Jackson if he's forced to play catchup in the second half.

Jackson showed confidence, poise and determination in putting to rest the assertion that he could not win in the playoffs.

“There was a lot of attention on it,” Harbaugh acknowledged. “It’s something that he won’t have to talk about in the future, and that’s a meaningful thing.”

Brown added: “I’m super proud of him, just to get that monkey off his back. Now, we can just try to build on it and keep going.”

Ravens veteran running back Mark Ingram was a healthy scratch. Ingram used to be the starter, but lost that role after twisting his ankle in October. Now, J.K. Dobbins and Gus Edwards are getting the majority of the carries and third-stringer Justice Hill is dressing on game day because he also plays on special teams.

Harbaugh said there were no significant injuries in Tennessee. “We should have everybody for next week. We're looking good right now," he noted.

2 — That's the number of punts on Sunday for Sam Koch — one after the opening series, the other in the third quarter after Baltimore was pinned deep in its own territory.

The Ravens could have their hands full trying to contain Bills quarterback Josh Allen, who went 26 for 35 for 324 yards with two touchdowns and no interceptions in the playoff opener against Indianapolis. He was also Buffalo's leading rusher with 54 yards.