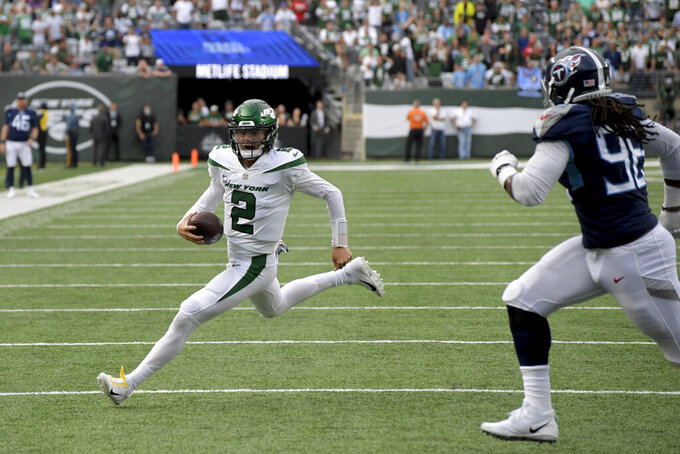 EAST RUTHERFORD, N.J. (AP) — Robert Saleh had just gotten soaked from a celebratory Gatorade bath when he turned to Zach Wilson after earning their first NFL victory together.

“You having fun yet?” the first-year head coach asked the rookie quarterback with a laugh.

The New York Jets can only hope there are plenty more days like this — but maybe without as much drama.

Matt Ammendola kicked a 22-yard field goal in overtime, and then Randy Bullock was wide left on a potential tying 49-yarder with 15 seconds left to give the Jets their first victory, 27-24 over the Tennessee Titans on Sunday.

“I am (having fun),” a grinning Wilson said. “It's an interesting fun, though. It was a roller-coaster game.”

After the Jets took the lead in the extra period but failed to seal it with a touchdown despite getting to the 1-yard line, Ryan Tannehill — playing without injured receivers Julio Jones and A.J. Brown — marched the Titans downfield with the help of two fourth-down conversions.

On second-and-5 from the Jets 26, Anthony Firkser couldn't hold onto a pass from Tannehill and then the Titans took a delay of game penalty. Tannehill threw incomplete to Jeremy McNichols, setting up the tying kick for Bullock — but the ball sailed wide left and sent the Jets (1-3) into a wild celebration.

“We battled back,” Tannehill said. “Proud of the way we battled through. Defense made a big stop in overtime. Got us the ball back, gave us a chance. We didn’t execute well enough in field goal range.”

The Jets had a chance to win it without giving the ball back to the Titans (2-2) when they got to the 1 on Tevin Coleman's 8-yard catch — on which it was ruled he was out of bounds as he dived just short of the goal line. Wilson took a 3-yard loss on third down, a rookie mistake, setting up Ammendola's 22-yarder.

“I was beating myself up on that last drive,” Wilson said. “I've got to take advantage of my opportunities to end that game.”

Wilson was mostly terrific, going 21 of 34 for 297 yards with touchdown passes to Corey Davis and Jamison Crowder and an interception.

He put New York ahead 24-17 with 9:06 left in regulation when he rolled out of the pocket to his right, pointed and waved downfield — urging Davis to keep going.

The rookie then launched a perfectly placed ball into Davis' hands for a 53-yard touchdown.

The Jets tried to run out the clock late in regulation, but had to punt and gave the Titans one more chance with 2:09 left.

It was more than enough time.

After a pass interference call on Jarrod Wilson on fourth-and-10 from the Titans own 26, Tannehill tossed passes of 12 and 11 yards to Josh Reynolds, 6 to Nick Westbrook-Ikhine and 6 to Firkser to get to the 2. After an incompletion, Tannehill found a wide-open Cameron Batson in the end zone for a tying 2-yard touchdown with 16 seconds remaining in regulation.

“It wasn’t like we didn’t move the ball,” Titans coach Mike Vrabel said. “We just weren’t able to finish drives early in the game and kept them in it.”

The Jets took their first lead of the season — 10-9 with 19 seconds left in the third quarter — on Ammendola’s 27-yarder. New York had been the only team in the NFL to not hold a lead in any game.

But it was short-lived as Tennessee leaned heavily on Derrick Henry, who ran for 50 yards on the next drive — including a 1-yard TD. Tannehill passed to MyCole Pruitt for the 2-point conversion and a 17-10 lead with 13:14 left. Henry finished with 157 yards on 33 carries.

Wilson and the Jets came right back, though, when he rolled to his right and zipped a 3-yard pass to Crowder for the tying score with 11:30 left.

The Jets had seven sacks, including two by Quinnen Williams, 1 1/2 by Bryce Huff and one each by Quincy Williams, C.J. Mosley and John Franklin-Myers. Bryce Hall had a half-sack.

Quinnen and Quincy Williams became the first brothers to get sacks in the same game as teammates since sacks became an official stat in 1982, according to the Elias Sports Bureau.

After a 6-yard run by Michael Carter got the ball to the 2, the rookie running back bulldozed his way up the middle — with a nice push from his O-linemen — to get into the end zone for his first NFL touchdown to cut the Jets' deficit to 9-7 late in the second quarter.

Tennessee's Tommy Townsend, in for the injured Brett Kern, had a 12-yard punt sail out of bounds late in the first half on his first kick with the Titans.

Jets: CB Brandin Echols left in the first quarter with a concussion and didn't return.

Titans: Head to Jacksonville to face Trevor Lawrence and the Jaguars.

Jets: Travel to London to take on the “home” Atlanta Falcons at Tottenham Hotspur Stadium next Sunday morning.