Jets' Wilson works out, still 'possible' to start vs. Ravens 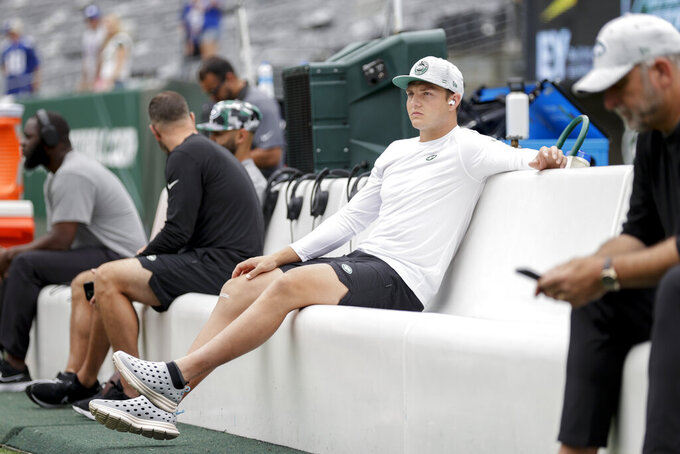 NEW YORK (AP) — There's still a chance Zach Wilson will open the season for the New York Jets under center instead of on the sideline.

Coach Robert Saleh said during a Zoom call that Wilson did some throwing on the field Monday while testing out his surgically repaired right knee, which was injured in the preseason opener at Philadelphia on Aug. 12.

And Saleh left the door open for Wilson potentially starting Sunday against the Baltimore Ravens, returning less than a month after surgery.

While it could be a little gamesmanship mixed with optimism, Saleh added the Jets will evaluate Wilson over the next two days and make a decision Wednesday on whether he or Joe Flacco will start. The coach added “it does nothing for us from game plan standpoint” to rush to name a starter for Week 1. He said Wilson, Flacco and Mike White are all capable of running Mike LaFleur’s offense at a high level, and the game plan would remain the same regardless of who's under center.

It might still be wishful thinking to expect Wilson to be completely healthy in time for the game.

Wilson suffered a bone bruise and torn meniscus, which was repaired via arthroscopic surgery in Los Angeles on Aug. 16. He was initially expected to miss two to four weeks, but the Jets have insisted they won’t rush the second-year quarterback back to the field.

This is an important season for the 23-year-old Wilson, who struggled at the beginning of his rookie year, then missed four games with a sprained PCL in his right knee before returning and showing marked signs of improvement to finish. He threw no interceptions in his final five games and appeared to be quicker at making decisions and reading defenses.

Wilson was having a good training camp before the injury, putting together nearly two weeks of solid practices entering the preseason game at Philadelphia.

The challenge for Wilson, whenever he returns, will be to get back quickly into a similar groove on the field despite missing nearly a month.

Saleh said Wilson would not need a ramp-up period to play once he’s healthy. He would step into the starting QB spot again at that point.

“Eventually, he's got to get back in there,” Saleh said. “Whether it's this week, next week, the week after, it doesn't matter. So, you just have to rip the Band-Aid off.

"When Zach's ready to play and he's healthy, like I've said from the beginning — when he's healthy and he feels good, he's going to play football.”

NOTES: Saleh announced that the players voted Wilson as the Jets' offensive team captain. Linebacker C.J. Mosley was selected as the defensive captain and Justin Hardee for special teams. All three were captains last year. Saleh said the coaching staff will select one player every week to join the other three as game day captains. ... CB D.J. Reed (knee) worked out on the field Monday and Saleh said the team will have a better idea of his chances to play by Wednesday. ... OL Conor McDermott was re-signed and rookie RB Zonovan Knight was released. McDermott, who was among the Jets' final cuts last week, has spent the last three seasons with New York mainly as a backup. Knight signed with the Jets in May as an undrafted free agent out of North Carolina State.