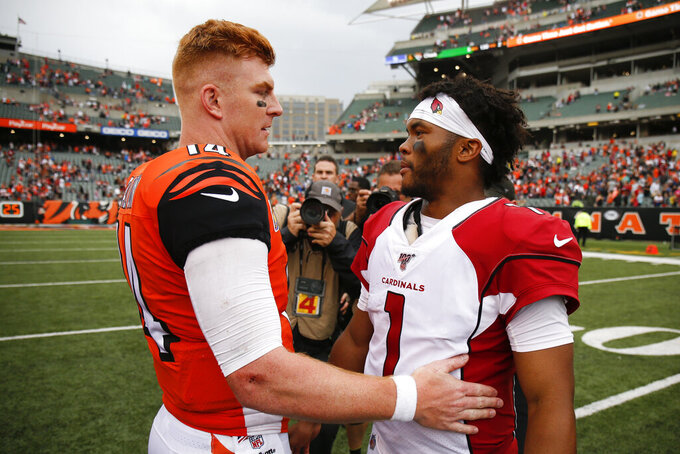 CINCINNATI (AP) — Exactly 2 minutes left. Half a field to cover. Fans in half-empty Paul Brown Stadium were creating as much of a din as they could, roused by a stunning Bengals comeback that forged a tie.

Kyler Murray's moment had arrived, and everybody was watching to see how the rookie would respond.

"I just looked at him and said, 'This is what we drafted you for,'" Cardinals running back Chase Edmonds said.

Murray threw a 24-yard pass — perfect, right down the sideline — and scrambled 24 yards to get Arizona in position for its long-awaited win Sunday. Zane Gonzalez completed the drive win a 31-yard field goal on the final play for a 26-23 victory over Cincinnati, the Cardinals' first win under coach Kliff Kingsbury .

"That's who he is," Kingsbury said. "He doesn't blink. He just made plays with his arm and his legs."

In a matchup of winless teams, the Cardinals (1-3-1) were a little bit better, with their Heisman Trophy winner making the difference.

Murray ran 6 yards for Arizona's first touchdown and saved them after a late defensive collapse. Andy Dalton threw a pair of touchdown passes that tied it 23-23 with 2 minutes to go.

Murray took the game into his hands.

He lofted a 24-yard pass to David Johnson that got the drive moving. Two plays later, he saw his intended receiver slip, so he took off and darted 24 yards through the heart of Cincinnati's defense, all the way to the 15-yard line.

"He can really scoot," receiver Larry Fitzgerald said. "Kyler saw a crease and like he's done since he was probably in Pop Warner, he took advantage of an opportunity."

Murray ran for a career-high 93 yards and completed 20 of 32 passes for 253 yards without an interception.

"We needed to win this game just for the morale of the team," Murray said.

The Bengals' misery found a new low. Coach Zac Taylor will have to wait at least one more week for that first win, his Bengals 0-5 for the first time since 2008.

It's the seventh time Cincinnati has opened 0-5 since 1990, the most in the league over that span. The Bengals haven't won a playoff game since that 1990 season, tied with Washington for the fifth-longest streak in league history.

"We were right there," Taylor said. "It felt like we were getting momentum. We thought this might be a turning point. This one is hard to swallow."

Cincinnati ended its streak of seven quarters without a touchdown as Dalton threw TD passes of 2 and 42 yards only 2:08 apart. The Bengals' defense couldn't stop the Cardinals' playmaker on the six-play winning drive.

Arizona's offense had its best all-around game. Edmonds put the Cardinals up 23-9 with a 37-yard touchdown run midway through the fourth quarter. The Cardinals piled up a season-high 266 yards on the ground and 514 overall.

The Cardinals also took a chance early that set up the first win.

Facing fourth-and-2 at the Cincinnati 6-yard line, Kingsbury chose to go for it and put the ball in Murray's hands for a run around left end that culminated in his dive into the end zone.

By contrast, Taylor also took a risk, going for it on fourth-and-1 from the Cincinnati 42-yard line, but his play call went nowhere. Dalton took a shotgun snap and was stopped on a keeper. Arizona turned it into Gonzalez's third field goal for a 16-9 lead early in the fourth quarter.

Murray had been sacked a league-high 20 times, but was dropped only once as he threw the ball away under pressure. Dalton was sacked the second-most times at 19 and was dropped a career-high eight times during a 27-3 loss in Pittsburgh on Monday night. Cincinnati leaned on its running game and shorter throws, and Dalton was 27 of 38 for 262 yards and one sack.

The Cardinals wore helmet decals honoring longtime owner Bill Bidwell, who died Wednesday at age 88. A moment of silence was held before the kickoff.

"It was a highly emotional game, one that was important to win," Fitzgerald said.

Bengals: LT Cordy Glenn missed his fifth game since suffering a concussion. LT Andre Smith left in the third quarter with an injured left ankle, leaving John Jerry to take the spot. ... WR Alex Erickson hit his facemask on the ground while being tackled after a catch in the second quarter and left with a concussion.

Bengals play at Baltimore on Sunday.