Lions' offense crashes to surface in shutout by Patriots 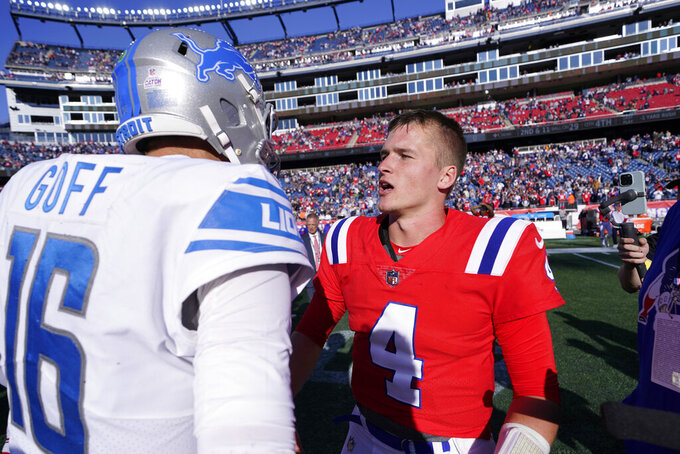 FOXBOROUGH, Mass. (AP) — For all the Detroit Lions' shortcomings over their first four games, one constant had been their offense's ability to score.

A week after putting up a season-high 45 points in an overtime loss to Seattle, the Lions were blanked 29-0 by the New England Patriots on Sunday. Detroit was shut out for the first time since 2020, and this was its worst such loss since falling 35-0 to the St. Louis Rams in 2001.

The Lions (1-4) entered with the NFL's top-ranked offense, averaging 35 points per game. But the Patriots were relentless in attacking Detroit's injury-plagued unit, intercepting Jared Goff in the end zone and sacking him twice. Both sacks were by Matt Judon, including one where he stripped Goff, leading to Kyle Dugger's 59-yard return for a touchdown.

The Lions managed a season-low 312 yards and became the second team in the past 25 years to enter a game leading the league in scoring and put up a zero.

Receiver Amon-Ra St. Brown returned for Detroit after sitting out last week with an ankle injury. But New England’s defense took advantage of a team that was missing running back D’Andre Swift and receiver D.J. Chark, stopping the Lions six times on fourth down.

“I did think we got some manageable downs, we just couldn’t convert them," he said.

The Patriots effectively took tight end T.J. Hockenson out of the game, limiting Goff's top receiver to one catch for 6 yards on four targets.

“You can’t say that they didn’t have some things for us," Hockenson said. “They are a very moving front and they do a lot of things up front. For me even to get out on a route was tough, because their ends were just not too worried about the rush and they were hammering me and it was just one of those things.”

The Lions have a bye next week. But things won't get easier after that with matchups with Dallas, Miami and Green Bay on deck. The Cowboys and Packers both have defenses ranked in the top 10.

“I don’t think the bye week could have come at a better time for us as a team,” St. Brown said. “If you look at the injuries we have, it’s going to give us time to heal up, rest up and rethink everything. I think this is going to be perfect for us having lost two or three straight now, to reset our minds and once we get back from the bye, it's full go.”