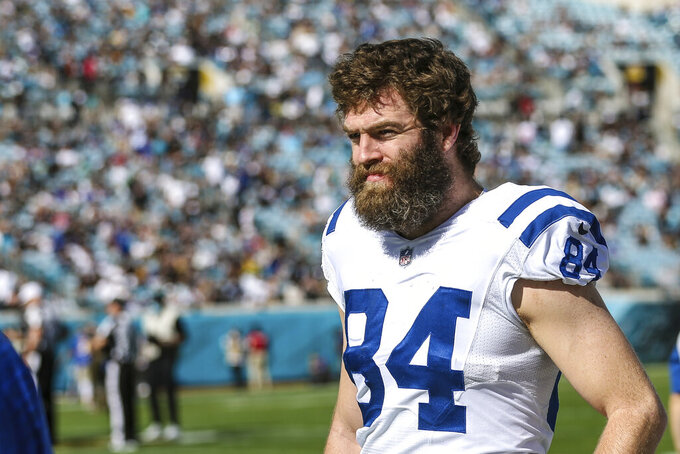 The 31-year-old Doyle played all 131 games of his nine-year career with his hometown team. His down-to-earth demeanor made him one of the locker room's most respected players and even prompted a teammate to wear a T-shirt with four playing cards featuring Doyle's face and the phrase “Jack of all trades.”

“Jack not only represented himself and his family with class, but represented our entire organization and the community with the utmost professionalism,” Colts owner Jim Irsay said in a statement. “Simply put, Jack was one of the most well-liked players in our locker room."

He was productive on the field, too.

In nine seasons with the Colts, he caught 295 passes for 2,729 yards and 24 touchdowns, making two Pro Bowls. Among Colts tight ends, Doyle ranks third all-time in receptions, fifth in yards receiving and fourth in TD catches.

After graduating from Indianapolis Cathedral High School, the former ball boy for the NBA's Indiana Pacers took the only FBS scholarship offer he had — from Western Kentucky.

Doyle played in the 2013 Senior Bowl but was undrafted. He signed with the Tennessee Titans, who released him late that summer. Indianapolis claimed Doyle off waivers, and he never left.

“After I was hired by the Colts in 2017, one of the first roster moves we made was re-signing Jack Doyle," general manager Chris Ballard said. “It was very apparent what type of player and leader he was and the impact he made as a teammate. He is a player we wanted our rookies to emulate.”

Doyle was a role model for his teammates off the field, too.

He and his wife, Cassie, also established a tuition grant to provide half scholarships for two incoming freshman to attend his prep alma mater. Other charitable ventures included visiting patients at Riley Hospital for Children and Read Across America events.

“We had ultimate trust in Jack to perform and execute at the highest level in any situation both offensively and on special teams,” coach Frank Reich said. “He was one of our most dependable players. Jack’s value to this organization will be hard to replace.”