Looking for starters at Hall of Fame Game? Try the O-lines 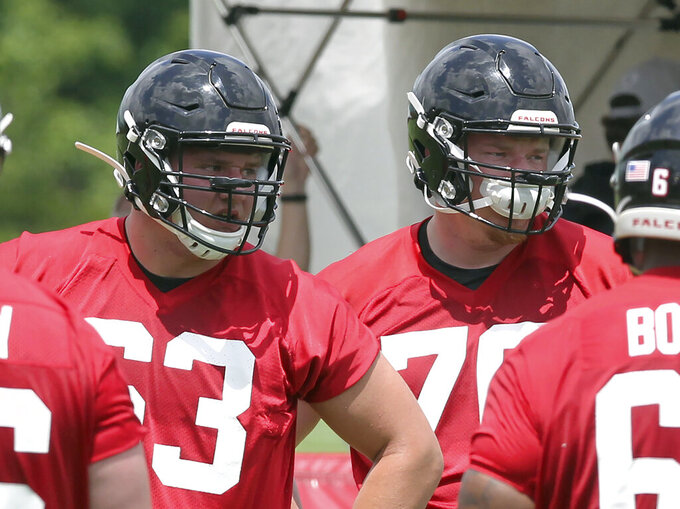 FILE - In this May 10, 2019, file photo, Atlanta Falcons first round pick offensive lineman Chris Lindstrom, right, and Kaleb McGary listen during NFL football rookie camp in Flowery Branch, Ga. If you’re looking for any likely regulars on the field Thursday night at the Hall of Fame game, for the Falcons and Broncos, focus on the offensive lines.(AP Photo/Tami Chappell, File)

CANTON, Ohio (AP) — It's the first preseason NFL game, which means most starters get to visit the Pro Football Hall of Fame, then watch the youngsters go at it.

So if you're looking for any likely regulars on the field Thursday night for the Falcons and Broncos, focus on the offensive lines.

Denver's new coach, Vic Fangio, will start three O-linemen who could be in the opening day lineup: left tackle Garett Bolles, rookie left guard Dalton Risner and center Connor McGovern. All need work on cohesion, a must for any blocking unit, but particularly when the quarterback is more stationary than most. That's what the Broncos have in veteran Joe Flacco, acquired from Baltimore.

McGovern's low snaps out of the shotgun have been a problem this summer, just as they were last season when he took over for an injured Matt Paradis, who left in free agency in the offseason.

"Yeah, let's see who can block a good pass rusher without chipping them," Fangio said. "Even though they've got the box loaded, let's see if we can run the ball up the middle."

Atlanta's front line battles have first-round picks Chris Lindstrom and Kaleb McGary competing for starting jobs at right guard and right tackle, respectively. Lindstrom was listed as the starter on the team's first depth chart, while McCary is behind veteran Ty Sambrailo.

The Falcons have the weapons to be dynamic on offense, but not if Matt Ryan (who also will sit Thursday night) doesn't get protection and Devonta Freeman doesn't have room to run.

One of the all-time greats among offensive linemen will be on hand: Mike Munchak. Fangio said one thing he was looking forward to was seeing the OL coach's bronze bust in the Hall of Fame.

"I'm sure Munch will be there charging a fee to take a picture with the guys with his bust," Fangio said. "I'm going to try to get a picture with Mike standing next to his bust. That will be cool."

Falcons wide receiver Julio Jones already has said he won't play in any preseason games. He skipped all preseason games last season before leading the NFL with 1,688 yards receiving. Jones said he'll be coaching young receivers and is especially interested in seeing Christian Blake, who he said has been "phenomenal catching the ball down the field."

Blake spent last season learning from the likes of Jones and Mohamed Sanu while on the practice squad, and he is having a strong camp.

The veteran defensive coordinator now in his first job as a head coach doesn't want to use a lot of stuff in the preseason, preferring to test his young players and see what they've got. He said he wants to puts his players in difficult situations "just to see who can handle it."

"For instance, if I'm pretty confident they might be throwing it, instead of giving a corner some help, we'll see if he can cover his guy. Play a light box even though we think they might be running it, things like that," Fangio said.

Falcons coach Dan Quinn said there has been no separation in the competition for carries behind starter Freeman, who comes off an injury-ravaged season. There is a void after Tevin Coleman, who had shared time with Freeman, signed with San Francisco. Ito Smith could be the favorite to earn a bigger role. The competition also includes Brian Hill, Kenjon Barner, rookie Qadree Ollison and Tony Brooks-James.