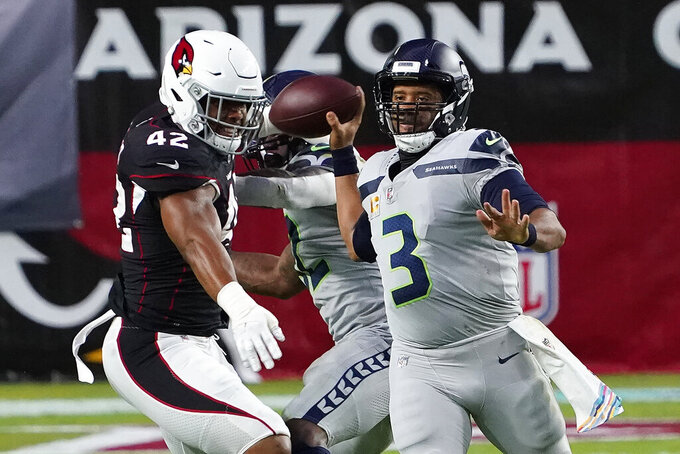 For NFL fans who relish division rivalries, this is your week.

Some of them are headliners: the 49ers at the Seahawks, Steelers at the Ravens and slumping Patriots at the Bills. Others — Vikings at Packers, Chargers at Broncos, Cowboys at Eagles — not so much.

Regardless, when familiar foes face off, it makes for intriguing storylines.

Take the 49ers at the Seahawks. The previous time they met, Seattle tight end Jacob Hollister was tackled inches from the goal line on the final play and San Francisco won the season finale and took the NFC West. Soon after, the Niners were in the Super Bowl.

It's a terrific rivalry usually marked by big plays, which the Seahawks specialize in: making them with star quarterback Russell Wilson, allowing them with a spotty defense.

"They’re giving up a lot of yards. I know their numbers are real bad, but the numbers don’t tell the whole story," 49ers coach Kyle Shanahan says of the Seahawks. “The way their offense is playing, their offense is playing as good as an offense I’ve seen. They’re putting up the points, they’re putting up the yards. Whenever you do have an offense playing like that, usually the opposing offense is trying to play a lot of catch-up and stuff, and they’re doing a lot of aggressive things. And they’ve given up some explosives, which gets the yards going, but they’re still third in the league in turnovers, which means they cause a lot of problems.”

The action began Thursday night when Atlanta finally was able to hold onto a late lead, beating Carolina 25-17 in the rain. The Falcons (2-6) had blown three games with fourth-quarter collapses. The Panthers fell to 3-5 with a third straight defeat.

Off this week are Arizona (5-2), plus Houston, Washington and Jacksonville, all 1-6.

As in the kind of hits fans will see in the NFL's most physical (and probably best) rivalry. Each defense and special teams sets the tone early and doesn't relent.

“This is one of those physical, heavyweight fights," Ravens cornerback Jimmy Smith says. "I feel it’s the same every time we play them. It feels the same way. It feels like you’re about to go into what you know as a championship fight — regardless of ... records or anything like that. You’re going into a dog fight and you’re going to be beat up at the end of this game.”

Baltimore has forced a turnover in 19 straight games, the longest active streak in the league. Baltimore and Pittsburgh are tied atop the NFL in QB hits with 64. The Steelers lead with 26 sacks, the Ravens have 22. The Steelers h ave at least one sack in 63 straight games, the third-longest string in NFL history. During their three-game winning streak, the Ravens have 16 sacks and 41 QB hits.

If ever the Bills are going to put aside the torture that has been their matchups with the Patriots for nearly two decades, it's now.

The Patriots have won seven straight in the series and are 35-5 against the Bills since Bill Belichick took over as coach in 2000. Tom Brady was 32-3 against Buffalo and set the NFL record for most wins against one opponent. New England’s 76 wins over the Bills are their most against anyone.

But these Patriots have dropped three in a row, struggling in all phases on the field and the sideline.

Not that the Bills are setting the NFL afire. Buffalo has combined for 51 points, 998 yards and 692 yards passing in the past three games. In Buffalo’s first four games, the offense generated 123 points, 1,639 yards and 1,326 yards passing.

This usually is a prime NFC North game. Obviously not in 2020 with the Vikings floundering.

The Packers have won the past three matchups, with the 43-34 victory in the season opener indicative of where these teams were headed. Packers coach Matt LaFleur is 8-0 in NFC North games. That doesn't mean Aaron Rodgers is complacent about facing Minnesota.

"Anytime you play a Mike Zimmer team, you’ve got to be ready for everything,” Rodgers says. “He’s a phenomenal coach. I was telling a friend of mine, to see him mentioned being on the hot seat, to me, is absolutely crazy. I think he’s one of the best coaches in the league and has been for a long time. They don’t all give you the trouble and scheme that Mike does.”

Lots of stats comparing these two disappointments, but more appropriate would be the attitudes in Dallas (timid, even passive) and Philly (resourceful and aggressive).

Sure, both sides have experienced major injuries, with the Eagles missing nearly half their starters and the Cowboys down to a third-string quarterback if No. 2 Andy Dalton (concussion) can't go. At least the Eagles have shown some grit in the face of adversity.

As for the stats, the Cowboys are last in turnover margin (minus-13) and giveaways (16), and tied for last in takeaways (3) and interceptions (1). They've allowed the most points in the NFL, 34.7 per game.

The Eagles might have found a keeper in WR Travis Fulgham, who has 357 yards receiving since playing his first game in Week 4 — the most in the first four games with the Eagles since Terrell Owens had 364 in 2004.

The least of the division games, with both of these clubs also-rans in the AFC West.

Tua Time. Strange timing, perhaps, considering the havoc Aaron Donald and Leonard Floyd could cause in the starting debut of QB Tua Tagovailoa.

But coach Brian Flores opted to make the move during Miami's bye week even though Ryan Fitzpatrick was on a hot streak. The Dolphins are on pace for their highest-scoring season since 1986, averaging 26.7 points per game.

Can a 19-point spread seem too low? In this case, probably.

The Jets gained 4 total yards in the second half last week against Buffalo. Sam Darnold returned from a shoulder injury and was sacked six times.

Chiefs coach Andy Reid can tie Curly Lambeau (229) for the fifth-most wins in NFL history. QB Patrick Mahomes has thrown a TD pass in 18 consecutive games, the longest streak in franchise history and currently the longest string in the NFL. Anyone want to bet the Jets will get in the way of Reid or Mahomes?

Although Philip Rivers has been sacked a league-low six times, look for the Colts to establish Jonathan Taylor in the run game against a leaky run defense ranked 26th.

Detroit has won consecutive games for the first time in more than a year, but needed yet another unfathomable collapse by Atlanta to do so. Matthew Stafford led the 36th game-winning drive of his career against the Falcons.

Four of the Browns' five wins have come against tailenders, and they have four such opponents remaining on the schedule. The Raiders are somewhere in between good and bad, but Las Vegas is the only team to allow at least 24 points in every game. Only eight teams in the Super Bowl era have allowed at least 24 points in the first seven outings.

At least the Raiders won't have to face WR Odell Beckham Jr. (knee).

Two clubs in need of a defensive makeover, but at least the Titans have overcome those shortcomings: Tennessee has won four games with a scoring drive in the final two minutes of regulation or overtime.

Cincinnati can't stop the run, and even good defenses struggle with Titans star RB Derrick Henry. At least top overall draft selection Joe Burrow is producing, with five 300-yard games. He’s the first rookie in league history to do that in seven games.

The Saints have won five straight in this series. Alvin Kamara leads the NFL with 824 yards from scrimmage, an average of 137.3 per game, and Drew Brees is heating up even without No. 1 target Michael Thomas.

The Bears rank 29th in yards per game and 27th in scoring (19.7 points), and their ground game is virtually nonexistent. Their defense wore down when Chicago was pummeled by the Rams on Monday night.

New York had some success against Brady, including two Super Bowl victories. But those Giants were far more talented than this lot.

Brady was sensational in picking part Las Vegas last week, has more playmakers than he can keep happy, and the Tampa defense is stepping up.