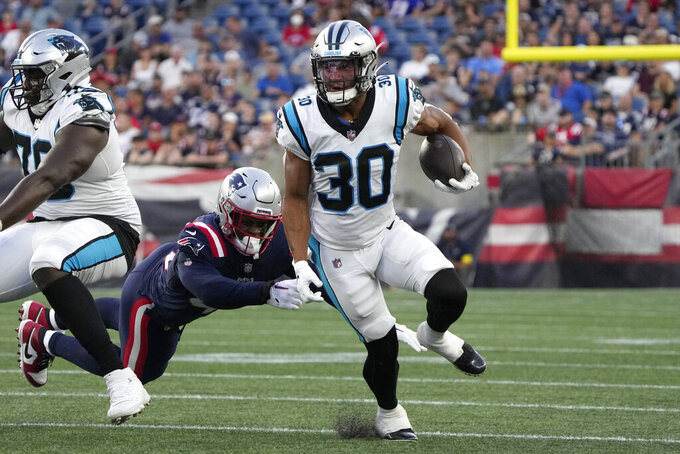 Carolina Panthers running back Chuba Hubbard (30) tries to get away from New England Patriots linebacker Raekwon McMillan during the first half of a preseason NFL football game Friday, Aug. 19, 2022, in Foxborough, Mass. (AP Photo/Michael Dwyer)

FOXBOROUGH, Mass. (AP) — The Patriots have been enduring growing pains on offense throughout the preseason as they adjust to a new simplified scheme.

It finally showed some hints of progress.

Mac Jones completed a 45-yard pass to set up a touchdown in his first game action of the preseason, Tristian Vizcaino hit a 51-yard go-ahead field goal in the fourth quarter and the New England Patriots beat the Carolina Panthers 20-10 in a preseason game on Friday night.

On a night when the Panthers paused their quarterback competition between Baker Mayfield and Sam Darnold, New England played Jones for three series. He finished 4 of 8 passing for 61 yards, had a 7-yard scramble and was sacked once.

Patriots assistant Matt Patricia remained the play-caller throughout the game, unlike last week when he shared the duties with Joe Judge. Jones called Patricia “one of the most brilliant people" he's been around on a football field.

“He’s really starting to get a feel for it," Jones said. “He’s very easy to talk to on the sideline. Very easy, laid back-type coach but he demands a lot and I respect that about him. Hopefully we can grow for a long time.”

Patriots backup Brian Hoyer played one series in the second quarter before handing it off to rookie Bailey Zappe for the remainder of the game.

Zappe was 16 of 25 for 173 yards and threw an interception to Tae Hayes that was returned 50 yards for a touchdown.

Lil’Jordan Humphrey had five catches for 71 yards. Nelson Agholor had two catches for 52 yards and Sam Roberts added a late fumble recovery for a touchdown.

After suggesting that he could decide his starting quarterback as soon as this week, Panthers coach Matt Rhule sat both Mayfield and Darnold. Third stringer P.J. Walker started and alternated quarters with rookie Matt Corral. Rhule said he still hasn't made a decision on a starter for the regular season.

“Not yet,” Rhule said. “Like I said all along, when we know, we know. And we'll announce something when it's right.”

Walker was 8 of 15 for 107 yards and two interceptions. Corral finished 9 of 15 for 58 yards. Corral had his foot stepped on late in the fourth quarter and left the stadium in walking boot.

Rhule also gave a night off to most of Carolina’s projected starters. There were some exceptions, including first-round pick Ikem Ekwonu. He started at left tackle after Rhule declared him the starter earlier in the week.

The man Ekwonu unseated for that spot, 2021 third-round pick Brady Christensen, got the nod at left guard where he is now competing with Michael Jordan.

The Patriots initially struggled to find traction offensively with most of their starters on the field for the first time after resting during last week’s exhibition opener. They went three-and-out on their first two series, with Jones misfiring twice on third down.

Jones finally got things going on their third possession, picking up a couple of first downs before connecting with Agholor on a 45-yard pass along the sideline to get into the red zone.

New England scored the first touchdown of the game three plays later on a 2-yard run by Ty Montgomery that made it 7-3.

“It was a little bit of a rocky start, but that’s how it goes when you haven’t played in a bit. You just have to keep playing," Jones. “It was good to get the feet wet again.”

New England’s first-team defense was mostly solid in limited action, forcing a three-and-out to open the game and then thwarting Carolina’s second drive with a pair of sacks by Deatrich Wise Jr. and Josh Uche.

Safety Joshua Bledsoe got into the mix in the second quarter when forced and recovered a fumble. The play was originally ruled an incomplete pass from Corral to Stephen Sullivan before coach Bill Belichick challenged and it was overturned upon review.

Shaun Wade added an interception in the third quarter, picking off a pass from Walker.

Panthers: RT Cameron Erving left in the second quarter with an elbow issue. ... RB Spencer Brown left on a cart in the third quarter with a leg injury. DE Amare Barno and S Juston Burris left with hamstring injuries.

Bourne’s absence came after he was dismissed from practice Tuesday for his involvement in a fight. Wilkerson was carted off and taken for off-site evaluation following a hit on Wednesday.

Panthers: Host the Bills next Friday in their exhibition finale.

Patriots: Head to Las Vegas for two days of joint practices before wrapping up their exhibition schedule against the Raiders next Friday.