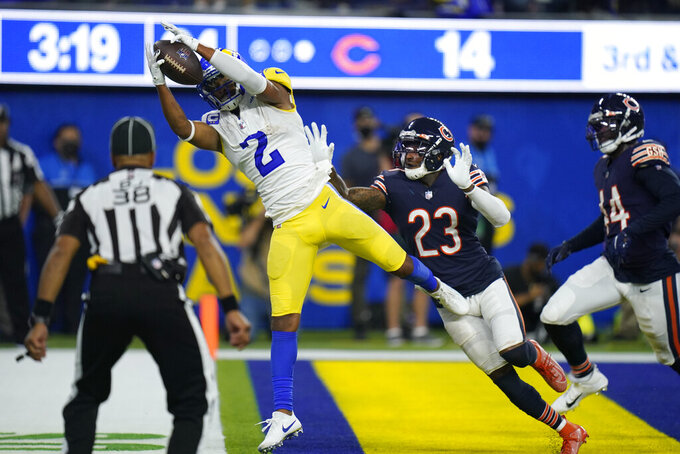 Los Angeles Rams wide receiver Robert Woods makes a catch in the end zone for a touchdown as Chicago Bears defensive back Marqui Christian (23) defends during the second half of an NFL football game, Sunday, Sept. 12, 2021, in Inglewood, Calif. (AP Photo/Jae C. Hong)

LOS ANGELES (AP) — One of Sean McVay's coaching slogans is emblazoned on walls and T-shirts throughout the Los Angeles Rams' training complex: “The standard is the standard.”

Matthew Stafford and the Los Angeles Rams set the standard awfully high in their season opener, but there's no reason yet to think they can't meet it again.

McVay had few significant complaints Monday about his team's effort in a 34-14 victory over the Chicago Bears to open a season with Super Bowl aspirations.

Stafford's offense was constantly effective and frequently brilliant, while the defense was more than good enough to improve the Rams' record to 5-0 in season openers under McVay.

The entire evening was a uniformly positive experience for nearly everyone involved with the Rams, who have become a perennial winner during McVay's five seasons in charge because they know how to handle both success and setbacks.

While McVay and his players all acknowledged the usual minor mistakes to be corrected in practice, the coach has no doubt he still has his team's attention.

“The last thing I'm worried about is our team having any sort of lull,” McVay said. “If anything, I think the urgency has picked up knowing that guys were happy about the win. But I don't think we have to worry about complacency setting in with this group because of our leadership.”

Stafford went 20 of 26 for 321 yards and three touchdowns without a turnover in one of the best statistical debuts for a veteran quarterback in recent NFL history.

The Rams also thrived in their first real game with fans at SoFi Stadium, which opened in 2020 with no crowds. Los Angeles had grown used to playing without cheers, but several players acknowledged the boost from support in the stands.

“Emotions were high, but it was a good feeling in the locker room,” said receiver Cooper Kupp, who had seven catches for 108 yards.

For an offense with a new quarterback and 11 starters who didn't take a single preseason snap, the Rams looked great. They scored points on six of their seven significant drives, and Stafford immediately found chemistry with his receivers and tight ends. McVay also looked confident as a play-caller.

The Rams' run defense was third best in the NFL last season, but it wasn't sharp in the 2021 opener. The Bears racked up 134 yards that could have been more if they weren't behind all night, and their 5.2 yards per carry was fourth highest in the opening week. Morris rarely stacked the box against the run.

With two sacks, eight tackles and a forced fumble, linebacker Justin Hollins made an impressive season debut 53 weeks after the Rams plucked him off waivers from Denver. Although he didn't technically start because the Rams were in a 4-2-5, Hollins played on a career-high 74% of LA's snaps and came through with numerous big plays.

Second-round pick Tutu Atwell only got on the field for two offensive snaps and didn't play on special teams. The speedy receiver will have to work his way up to playing time in the Rams' deep group of wideouts, and he doesn't have the job as LA's punt returner, either.

Starting DT Sebastian Joseph-Day “banged his knee up a little bit,” McVay said. Joseph-Day might miss a practice, but McVay expects him to play this weekend.

26: The number of passes thrown by Stafford. That's fewer than 25 other quarterbacks in the Week 1 games before Monday night, so the Rams haven't truly aired it out yet.

The Indianapolis Colts (0-1) and their powerful offensive line will provide a solid test for the Rams' defense in their road opener.