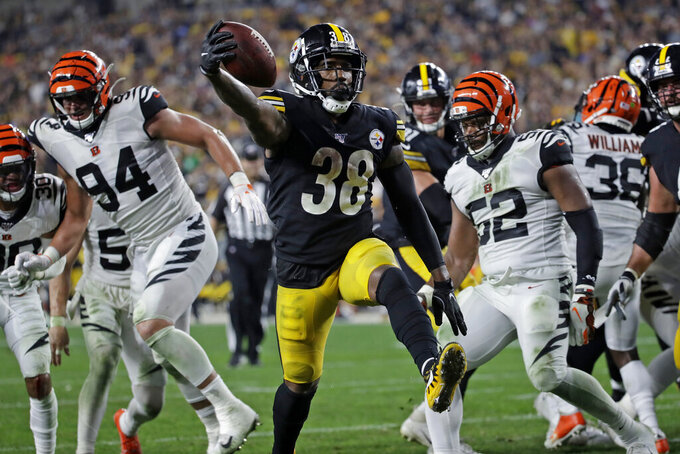 Pittsburgh Steelers running back Jaylen Samuels (38) scores on a 2-yard run during the second half of an NFL football game against the Cincinnati Bengals in Pittsburgh, Monday, Sept. 30, 2019. (AP Photo/Don Wright)

PITTSBURGH (AP) — Ben Roethlisberger’s right arm is in a cast while he recovers from right elbow surgery.

Joe Flacco is trying to keep the Denver Broncos afloat.

Terrell Suggs is in Arizona.

Time to see if the professional hatred that’s long been a hallmark of one of the AFC’s most bitter rivalries can be handed down from one generation to the next.

Lamar Jackson saw a taste of it last season as a rookie, playing in a handful of series when the Ravens came into Heinz Field and won last September.

“They play that little song, and they wave their little flags and stuff, with the little towels around,” Jackson said. “It was pretty dope. I enjoyed it. I did, I really did.”

Maybe, but his vantage point will be considerably different on Sunday when the second-year quarterback leads Baltimore (2-2) into Pittsburgh (1-3) in a game that features new faces but similar stakes. A Steelers victory and Pittsburgh’s sluggish 0-3 start is largely forgotten. If the Ravens bounce back after getting drilled at home by Cleveland last week, they’ll regain some of their swagger and practically bury the Steelers in the process.

“It’s going to be pretty crazy,” Jackson said. “No Ben, a whole new team, a new era. We just have to get ready for it.”

Pittsburgh, for the first time since Roethlisberger exited at halftime of a Week 2 loss to Seattle, certainly looked ready to compete by crushing the hapless Bengals on Monday night. Mason Rudolph threw for 229 yards and two scores. Jaylen Samuels did a little bit of everything, running 10 times, catching eight passes and even throwing three more. The defense racked up eight sacks and produced a pair of turnovers.

The Ravens, however, represent a significant step up in quality. All the momentum gained against Cincinnati will vanish if the Steelers can’t find a way to back it up. And they know it.

The key is trying to find a way to slow down Jackson, something no opponent has really done since he took over for Flacco in the middle of last season. Primarily a runner last season, the former Heisman Trophy winner has become far more dynamic a passer this season. That only makes Jackson more dangerous when begins freelancing after a play breaks down.

The Steelers signed quarterback Taryn Christion to the practice squad this week for the sole purpose of having him provide a primer on how to deal with Jackson. Yet for all the imitating Christion provided, the reality will be considerably more demanding.

“We need to make those tackles when we have those one-on-one chances with him in space,” Steelers outside linebacker Bud Dupree said. “He does a great job of making people miss ... so you have to take your shot and hope the cavalry is coming.”

The Ravens signed linebacker L.J. Fort on Monday for reasons that have little to do with getting a scouting report from a former Steeler.

Fort was with the Steelers from 2015-18 before joining the Eagles. After being cut last week, he latched on with Baltimore.

The Ravens expect him to contribute on defense and special teams.

"Good football player,” Harbaugh said. “He's played middle linebacker, played MIKE, quite a bit from the start with the Steelers, on and off. Top-level special teams player. I think we're very fortunate that he became available due to the injury situation out there in Philly. He's a fit for us defensively and special teams-wise, so a good player.”

Rudolph and wide receiver James Washington set records together at Oklahoma State. When Rudolph took over after Roethlisberger went down, it seemed as if Washington’s role in the offense would increase. Instead, it’s gone the other way. Washington didn’t catch a single pass against Cincinnati and was only targeted once as the Steelers relied heavily on Samuels and backfield mate James Conner.

“Just got to keep working,” Washington said. “It’ll happen, just stay confident in everybody on this team and trust that everything that happens for a reason.”

The Ravens were run over by Nick Chubb last week, the most notable play an 88-yard jaunt that clinched it after Baltimore closed to 24-18.

Harbaugh couldn't remember the last time Baltimore got burned so badly on a run up the middle.

"We win the game with a touchdown and we’re going to give up an 88-yard touchdown? That’s not Ravens football," Harbaugh said. "We had seen that run already earlier in the game. That same exact play three or four times. We’re better than that."

He can only hope so, or Conner could have a huge game Sunday.

"Those 88-yard runs are as rare as it gets. The guy went untouched," Harbaugh said. "Whatever it takes to fixed, we’ll get it fixed, by any means necessary."

The Steelers led the NFL in sacks last season but produced just 15 turnovers, statistics that seemed to be at odds with one another. At the moment, they seem to have a pretty good handle on both. Pittsburgh has 14 sacks through four weeks and the defense has created nine takeaways, well ahead of last year’s pace.

“I think it comes down to ball awareness,” Steelers coach Mike Tomlin said. “That is something we have really been stressing, not only through the team development process but way back in the spring. If you want to create turnovers, first you have to be a group who is aware of the ball and who is carrying it and the opportunities associated with that. I just think in general, we are displaying better ball awareness and it is producing opportunities to get it.”