No Bones about it: Denver's Hyland, Jokic beat Embiid, 76ers 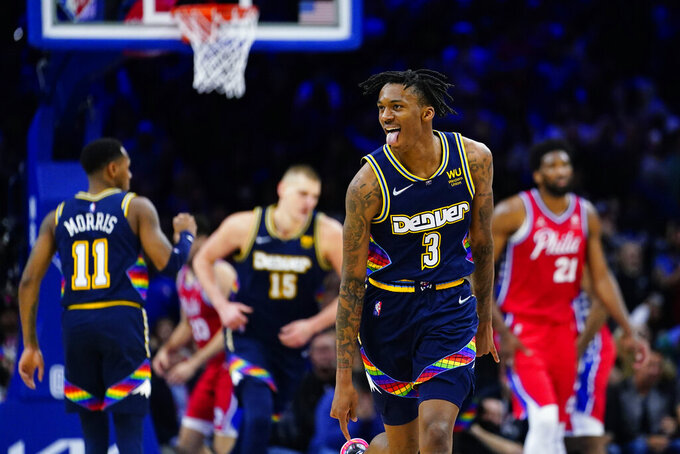 Denver Nuggets' Bones Hyland celebrates after making a three-pointer during the second half of an NBA basketball game against the Philadelphia 76ers, Monday, March 14, 2022, in Philadelphia. (AP Photo/Matt Slocum)

PHILADELPHIA (AP) — Bones Hyland received a special gift from the Delaware firefighters and first responders who saved his life from a house fire in 2018 — a custom Wilmington Fire Department jacket — and Hyland took it and jumped with a wide smile into the stands to share the moment with some of his friends and family.

How many of Hyland's fans made the 30-mile trip north? He said maybe 600 or 700, and they could be heard cheering among the 21,000 mostly 76ers fans that packed the place Monday night.

“I'm the kind of kid who wants to show the next kid in the city that you can be in this position,” he said. “I want to be the guy that's for the younger youth.”

Upstaging a pair of MVP candidates was quite the homecoming.

Hyland made four decisive 3-pointers in the fourth quarter and scored 21 points to lead the Denver Nuggets past the Philadelphia 76ers 114-110 on Monday night.

Nikola Jokic had 22 points and 13 rebounds for Denver and Joel Embiid finished with 34 points in a battle of MVP frontrunners.

Hyland, who suffered a torn patellar tendon when he jumped from the second-floor of the house, and his brother survived the fire. Hyland's cousin and grandmother died in the fire.

Hyland burst into tears after the game when asked about his relationship with the first responders, and could not continue with his answer. But the rookie guard, a first-round pick in the 2021 draft, composed himself and said he dedicated his life and career to ones who got him through the tragedy and the family he lost along the way.

The Jokic-Embiid showdown had more to offer, too.

Jeff Green clobbered Embiid on a drive to the basket with 3:13 left and the All-Star center landed smack on his tailbone. Embiid immediately grabbed at his back, but walked off the court on his own power as the play was reviewed. Green received a flagrant foul and Embiid went 1 of 2 from the free-throw line to cut Denver’s lead to 107-106.

But Hyland stole the show from the All-Star big men, burying his fourth 3 of the fourth quarter for a 110-108 lead that the Nuggets held on to.

Jokic won the MVP last season and Embiid was runner-up, and the franchise stars are again considered the leading contenders to win it this season. Embiid entered the game leading the league in scoring at 29.8 points and Jokic was second at 26.1. He also averages 13.8 rebounds and 8.1 assists.

“He's a great player, great competition, I love playing against the best,” Embiid said of Jokic. “He's a monster. I love watching him. But he's also easy to study.”

One big dent in Embiid’s MVP case last season came in games played. Jokic was a deserving winner, and played in 72 games and logged 2,488 minutes to Embiid’s 51 games and 1,585 minutes.

“I think Joel wants to play more. He said that at the end of last year,” 76ers coach Doc Rivers said. “He said, ‘I want to come in in better shape. I feel like I need to play more games to help our team.’ It could be some of that. I’m just happy he’s playing more.”

The Nuggets tried to downplay the matchup.

“I understand the excitement. You have two MVP candidates, and rightfully so,” Denver coach Michael Malone said. “But I don’t go to bed at night, saying I can’t wait for Nikola and Joel to go at it. I’m just trying to figure out a way to help our group get back to winning.”

Turns out, he needed Hyland as much as Jokic.

Drafted out of VCU, Hyland played in the Rising Stars game during All-Star weekend and has worked his way into the rotation for the Nuggets as they chase playoff seeding. Hyland still has plenty of fans in the area, due in part to the annual streetball tournament he holds in Wilmington.

The 76ers had eked out an overtime win a night earlier at 18-win Orlando, and Embiid looked fatigued down the stretch Monday. He played the final minutes with five fouls and was a helpless bystander as the Sixers outside shooters missed open looks. The worst sequence came when Georges Niang clanged one of the side of the backboard and missed the follow-up with Denver up 113-110.

76ers: G Danny Green played after he missed the last two games with a laceration on one of his fingers. ... James Harden had 24 points and 11 assists.

Jason Kelce can sing almost as well as he can snap.

The Philadelphia Eagles' four-time All-Pro center crushed his rendition of the national anthem before Monday's game. Kelce made a promise to former Eagles teammate Connor Barwin: If Barwin could raise $100,000 for his Make The World Better foundation, Kelce would sing the anthem.

Kelce said it had been years since he was “nervous-nervous,” then added, “I’m nervous-nervous right now. My knees are shaking out there doing the soundcheck.”

The 34-year-old, known almost as much for his fiery Super Bowl parade speech while dressed as a Mummer, said he was glad he took his time to decide if he would play again or retire.

“The more I stepped back from the game," he said, “the more it was really evident I wanted to keep playing."

Nuggets: Continue a three-game trip with games Wednesday at Washington and Friday at Cleveland.

Sixers: Play Wednesday at Cleveland before they return for a three-game homestand that opens Friday against Dallas.