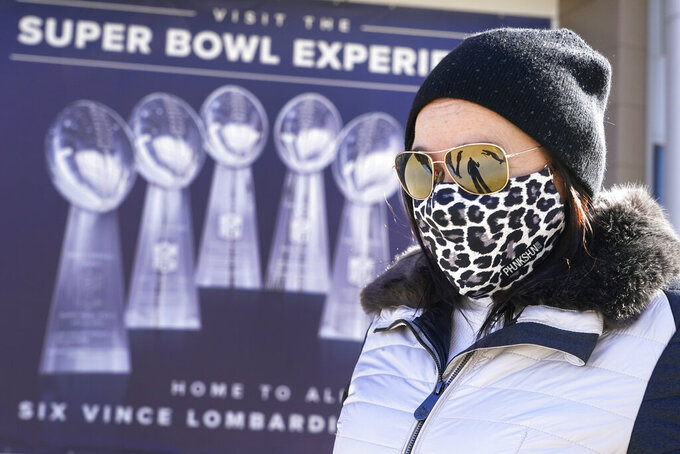 CORRECTS SPELLING OF NAME TO KATHIE NOT KATHY Football fan Kathie McCarthy speaks to a reporter outside the pro shop at Gillette Stadium, Monday Jan. 25, 2021, in Foxborough, Mass. Tom Brady is going to the Super Bowl for the 10th time, and New England Patriots football fans are cheering for him -- just like before. (AP Photo/Elise Amendola)

FOXBOROUGH, Mass. (AP) — As soon as the Tampa Bay Buccaneers won the NFC title game, Brian Pope went shopping for a Tom Brady jersey to wear when he watches them play in the Super Bowl.

One problem: Pope lives in Connecticut. And he isn’t really even a Buccaneers fan — or at least he wasn’t, until Brady left the New England Patriots to make another championship run with Tampa Bay.

“I’ll be watching, and I’ll be rooting for Brady,” Pope said as he eyed a rack of the quarterback’s Patriots and Michigan Wolverines jerseys in the Gillette Stadium pro shop on Monday afternoon.

“I wish he hadn’t left, but so be it,” Pope said. “I’m still a Patriots fan, but I’m not upset that he’s playing in the Super Bowl, by any stretch.”

Brady won an NFL record six Super Bowls with the Patriots, and he also played in three others during a 20-year career in New England that ended when he signed with the Buccaneers as a free agent in March.

Since then, the fans he left behind have been following him from afar. And now that he is getting ready to play in his 10th Super Bowl, many are rooting for him as if he'd never left.

“He was here 20 years; he did a great job; never got into trouble. So why not pursue his dream,” said Kathie McCarthy, who was at Gillette Stadium to receive her COVID-19 vaccination.

“I wish there was some way we could have kept him,” she said, checking her watch to make sure she wasn’t late for her appointment. “But people forget these are their jobs. These are their lives.”

Boston has a long history of watching its star athletes leave, dating back at least as far as the Red Sox's sale of Babe Ruth to the rival Yankees in 1919. Ruth went on to win four World Series in New York; the Yankees won 26 before the Red Sox won it all again, snapping an 86-year drought in 2004.

Bruins star Bobby Orr finished his career with the Chicago Blackhawks, and fellow Hall of Fame defenseman Ray Bourque was traded to the Colorado Avalanche for the chance at a Stanley Cup that the Bruins were unable to give him.

And just last summer, 2018 AL MVP Mookie Betts was traded to the Los Angeles Dodgers, following a trail out of town previously blazed by Red Sox stars like Ruth, Carlton Fisk and Roger Clemens. The Dodgers went on to win the World Series.

“This might be worse than Mookie because (Brady) has been there so long and won so many championships,” Pope said. “I obviously wasn’t here when Babe Ruth left, but I’d say it’s got to equal that."

Pope said he went online after the Buccaneers' 31-26 victory over the Green Bay Packers on Sunday night and ordered Brady's No. 12 Tampa Bay jersey in pewter. But he received a delivery date of Feb. 11 — four days after the Super Bowl.

So he drove up from Connecticut to see if the Patriots Pro Shop had any Brady Buccaneers gear in stock.

Instead, Brady jerseys from his time in New England and Michigan shared a rack with other former Patriots players, including tight end Rob Gronkowski, who joined his longtime quarterback in Tampa Bay. Some Brady merchandise was discounted, but the replica jersey was still full price.

“I hate seeing someone who has played that many years in one place to not retire there," Pope said. "I don’t know whose fault it was. But either way, I’m just a Brady fan.”

Thanks to Brady, January has been a busy time in Foxborough, with the Patriots hosting at least one home postseason game in 17 of his 19 seasons as the starting quarterback.

This year, things have been quiet, with just a handful of people milling around the Pro Shop on a sub-freezing day and just a few more at the attached mall. The action was on the other side of the stadium, where hundreds lined up to receive a COVID-19 vaccine in one of the large function rooms the state has set up as a mass vaccination site.

Kelly Roccabello brought her son to lunch near the stadium on Monday and then over to peek at the field, which has been idle since the Patriots’ season ended on Jan. 3. “He was asking about it the whole time,” she said.

After popping over to their car so Giovanni could wear his Patriots hat for the interview, Roccabello said she allowed him to stay up late to watch the team win the Super Bowl two years ago. At 6 years old, he had never known a Patriots season without Brady as the quarterback, or without a trip to the playoffs.

So they'll be rooting for the Buccaneers on Feb. 7.

“I think we’re just sad about it," Kelly Roccabello said. “But no hard feelings.”