Packers caught in tailspin ever since London trip 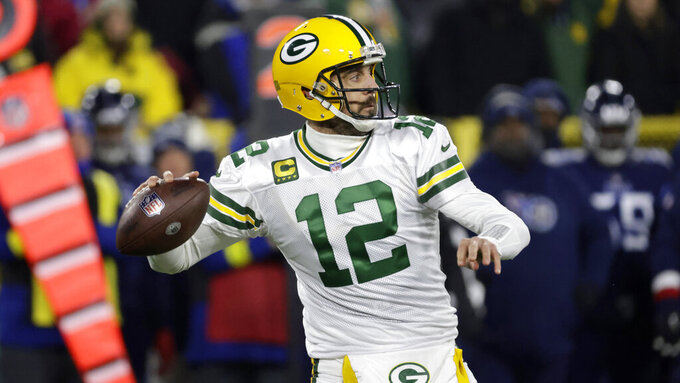 GREEN BAY, Wis. (AP) — The Green Bay Packers were tied for first place in the NFC North when they headed to London last month as 8 1/2-point favorites over the New York Giants.

They haven’t been the same since.

Green Bay blew a 14-point lead that day and lost 27-22 in a game that ended with Aaron Rodgers injuring his right thumb on a foiled Hail Mary attempt. That started a seven-game stretch in which the Packers have gone 1-6, putting their playoff hopes in peril.

The Packers (4-7) didn’t get a week off after the London trip at their own request because they wanted the rest later in the season. Packers coach Matt LaFleur wonders now whether that was the right call.

“Yeah, absolutely I’ve wrestled with that, and all you can do is move forward and learn from every experience, both good and bad,” LaFleur said Friday, one day after a 27-17 loss to the Tennessee Titans. “It’s a tough lesson, I would say, considering where we’re at. But it was the decision that I made at the time and what I thought was best for our team, and it’s hard to say if that was the right decision.”

LaFleur has learned plenty of tough lessons this year — in contrast to his first three regular seasons as Green Bay's coach, all of which finished with 13 wins and the NFC North title.

Barring a historic collapse by Minnesota (8-1), the division is out of reach this year. A wild-card playoff berth is still possible. The Packers believe they can turn their season around, but they acknowledge they’re running out of time to do so.

“Our backs are against the wall,” wide receiver Randall Cobb said Thursday night. “You’ve got to win games now. You lose another one and you might as well say we’re probably out.”

That’s bad news for a team that still has three games left against division leaders. The Packers visit Philadelphia (8-1) on Nov. 27, play at Miami (7-3) on Christmas Day and host Minnesota on New Year’s Day.

Even if the Packers fall out of contention, LaFleur says they still should have plenty of incentive.

A run defense that has struggled for much of the season limited two-time NFL rushing champion Derrick Henry to 87 yards on 28 carries. Henry’s longest rush was 9 yards, though he did catch a short pass and turn it into a 42-yard gain. ... Receiver Christian Watson scored twice Thursday and has five touchdowns in his last two games. ... Green Bay got a spark from its punt-return unit after releasing former return man Amari Rodgers. Keisean Nixon netted 37 yards on two returns.

The pass defense was gashed all night, as Ryan Tannehill went 22 of 27 for 333 yards. ... The offense couldn’t get anything going down the stretch. The Packers ran 20 plays for 45 yards in the fourth quarter. ... Four nights after teaming up for 203 yards rushing in a 31-28 overtime triumph against the Dallas Cowboys, Aaron Jones and A.J. Dillon combined for 53 yards on 18 carries.

Watson is the first Packers rookie to have multiple touchdown receptions in consecutive games since Max McGee in 1954. ... LB Quay Walker made a fourth-and-1 stop of Henry at Green Bay’s 4-yard line. ... Cobb had six catches for 73 yards in his return from a high ankle sprain that caused him to miss four games.

Dillon, who rushed for a career-high 124 yards in a 40-14 victory over the Titans two years ago, had six carries for 13 yards. ... While Rasul Douglas had an interception, the entire secondary is heading in the wrong direction after allowing Tannehill to have his best game of the season. ... Veteran receiver Sammy Watkins had no catches. Watson has exceeded one catch or 9 yards receiving in one of his last four games. ... Rodgers threw two touchdown passes without an interception but also went 2 of 8 for 11 yards when the Packers went three-and-out on three straight fourth-quarter possessions.

Walker hurt his shoulder in the fourth quarter but talked to reporters after the game, an indication the injury might not be anything major.

300 — The Packers gained 271 yards Thursday, the third time in their last six games they’ve been held below 300. Green Bay failed to reach 300 yards just twice in each of the previous two seasons.

The Packers get some extra time off before starting a two-game road swing on Nov. 27 at Philadelphia (8-1). The Packers visit Chicago (3-7) the following week.