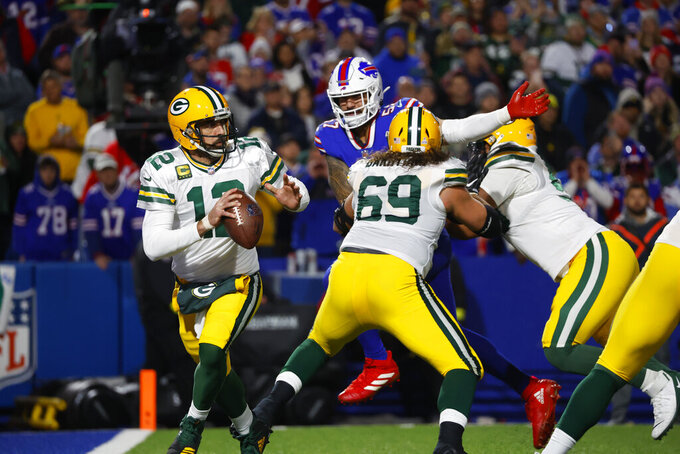 The previous time the Green Bay Packers lost four straight games, they followed it up with a remarkable stretch run that ended just one step shy of the Super Bowl.

These bruised and battered Packers haven’t offered much evidence they’re capable of making a similar turnaround.

Green Bay (3-5) is two games below .500 for the first time in coach Matt LaFleur’s four-year tenure after falling 27-17 at Buffalo. The offense isn’t showing enough balance and the defense isn’t getting enough stops.

“We’ve got all the talent in this locker room that we need,” running back Aaron Jones said after rushing for 143 yards against the Bills. “We’ve just got to put it together now.”

Green Bay’s recent results suggest the Packers actually might not have enough firepower to repeat their 2016 surge.

That’s the year when a four-game skid dropped the Packers to 4-6, but they responded by winning eight straight before losing the NFC championship game at Atlanta.

The Packers have some major holes general manager Brian Gutekunst could try to address before Tuesday's trade deadline.

“It really comes down to opportunity,” LaFleur said Monday. “If the right opportunity presents itself, I know that Gutey’s all on board of trying to upgrade our roster. You’re always trying to do that. But we’re not just going to do a silly deal.”

The Packers knew their receiving unit would be a major concern heading into the season following the trade of two-time All-Pro Davante Adams to Las Vegas, but injuries have made the situation even more dire.

Rookie second-round pick Christian Watson returned after missing two games with a hamstring injury, only to leave with a concussion in the first quarter. The Packers also were missing Allen Lazard (shoulder) and Randall Cobb (ankle). Cobb is on injured reserve and will miss at least two more games.

The Packers could deal with their issues on offense more easily if their defense was living up to its preseason billing. That hasn’t happened.

“We need to be more physical,” LaFleur said. “I think you look at the teams that are toughest to deal with in this league, especially from a defensive standpoint, and physicality, it jumps out to you. There were moments where we’re not always getting that.”

While the Packers have given up the second-fewest yards passing per game of any NFL team, quality receivers such as Buffalo’s Stefon Diggs and Washington’s Terry McLaurin have thrived against this secondary.

“We’ve got to help our defense out a little better early in the game,” Rodgers said. “When we went on a run back in ’16, we started those games faster so we could play more one-dimensionally on defense. We just haven’t done that. We haven’t put up any points early in games to get our defense to have a chance to pin their ears back and get after the passer.”

The Packers ran for a season-high 208 yards against a Buffalo defense that had been allowing the fewest yards rushing per game of any team before Sunday.

The Packers have committed 17 penalties over their past two games and had LB Quay Walker ejected for shoving Bills practice squad TE Zach Davidson on the sideline in the second quarter. ... The defense allowed Buffalo to score on five straight possessions. ... Buffalo rushed for 153 yards and gained 5.7 yards per carry.

Jones has rushed for 575 yards this season to rank fifth in the NFL entering Monday. Jones is gaining 5.9 yards per carry. ... After failing to catch a pass in a 23-21 loss at Washington last week, Doubs had four receptions for 62 yards, including a 26-yard touchdown. ... Toure had a 37-yard score for his first career touchdown.

CB Eric Stokes continued his season-long struggles and was briefly removed from the game in the second quarter before returning. ... S Darnell Savage had a number of missed tackles, most notably when QB Josh Allen scrambled 20 yards on a third-and-14 play to set up Buffalo’s first touchdown. ... WR Sammy Watkins has just three catches for 39 yards in two games since getting activated from injured reserve.

Along with the injuries at receiver, LB De’Vondre Campbell didn’t return after injuring his right knee. “I don’t think it’s long-term, but whether or not he’ll be available for this week, I’d say it’s kind of up in the air,” LaFleur said. ... OL Elgton Jenkins (knee/foot) didn’t play Sunday.

0-7 — The Packers have lost in each of their seven trips to Buffalo. Sunday marked the first time they’d played at Buffalo since 2014.

The Packers try to avoid their first five-game losing streak since 2008 as they close a three-game road swing at Detroit. The Lions have lost five straight.