Panthers' Corral has 'big chip' on shoulder after draft fall 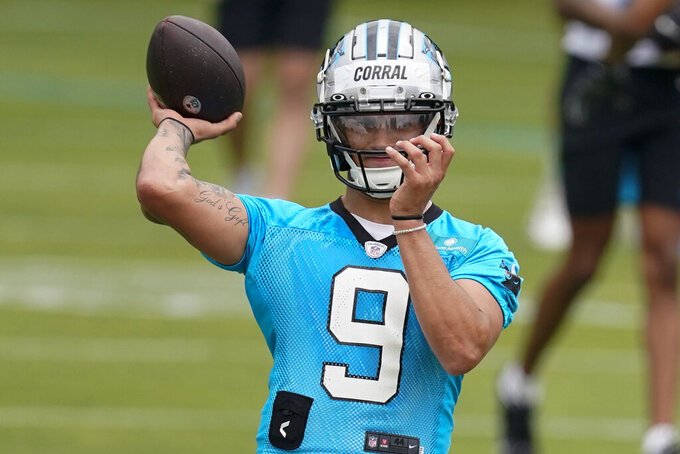 CHARLOTTE, N.C. (AP) — Matt Corral’s unexpected fall to the third round of the NFL draft has left the Carolina Panthers rookie quarterback with a good bit of motivation as he begins his professional career.

“Honestly, I had a big chip on my shoulder before — but it just got bigger,” Corral said Friday after his first minicamp practice.

Corral traveled to Las Vegas to be a part of the NFL draft festivities last month, but left the green room following the first night when his name wasn't called. He never returned. He spent the second night in a nearby hotel room with his family waiting — and waiting — to be selected.

It didn't happen until the 94th overall pick when the quarterback-needy Panthers traded up into the bottom half of the third round to get him, ending what the former Mississippi signal caller called “a roller coaster of emotion.”

“I truly have never been happy and sad at the same time,” Corral said of the phone call. “I’ve never felt that before."

Corral offered no explanation for the free fall.

He addressed an NFL Network report shortly after the draft that attributed teams passing on him because he had “alcohol and related issues” in his past.

“I don’t know where that came from,” Corral said. “It’s one of those things that got out there. That was honestly the first time I heard that. That’s not something I can control.”

Panthers coach Matt Rhule downplayed those reports, saying the team talked to his college roommate, teammates and coaches — and the feedback was “you're going to love him.”

“I'm more interested in the issues that people have now than the issues that they have overcome,” Rhule said. “I certainly don't want to be judged at what I was at 18, 19 or 20 (years old). All of us have gone through things in life."

While Corral's fall from a potential first-round draft pick cost him millions on his rookie contract, the reality is he's landed in a place where he has a chance for long-term success. The Panthers don't have an established quarterback.

Sam Darnold struggled last year with 13 touchdown passes and 19 interceptions and his hold on the starting spot is tenuous at best. P.J. Walker is the only other returning QB. Rhule said it helps “even the playing field” for rookies that all of Carolina's offensive players will be learning a new system under new new offensive coordinator Ben McAdoo.

Rhule reiterated the Panthers still could add a veteran quarterback under the right circumstances..

Cleveland's Baker Mayfield is among those the Panthers might consider, but only if the Browns were willing to pay a large chunk of his salary. The same goes for San Francisco's Jimmy Garoppolo.

The Panthers are already on the hook for $18.9 million in cap money after picking up the fifth-year option on Darnold's contract last year, and they can't afford another high-priced signal caller.

Rhule views Darnold as the starter and plans to bring along Corral slowly, allowing him to time to make the transition from playing in a spread offense in college to a more conventional NFL system.

Corral said his immediate goal is to position himself to compete, but that's not his biggest concern right now.

“All it comes down to is knowing the playbook,” Corral said. “If I can know the playbook I'm going to be ready to play. ... Of course my mentality is to be the starter, but right now I'm trying to get on that 53-man roster.”

Panthers rookie offensive tackle Ikem Ekwonu said he likes what he saw on day one from Corral in the huddle.

“Cool, calm and collected,” Ekwonu said. “Just going through the walkthroughs this morning you could see the poise in the pocket and you kind of feel like he’s ready for the position.”

“The way he throws the ball, his vision, his release and his timing, we just thought it would transfer over to this level,” Rhule said

By W.g. Ramirez an hour ago
By Noah Trister 8 hrs ago
By Kyle Hightower 9 hrs ago
By Steve Reed 11 hrs ago
By Joe Reedy 13 hrs ago