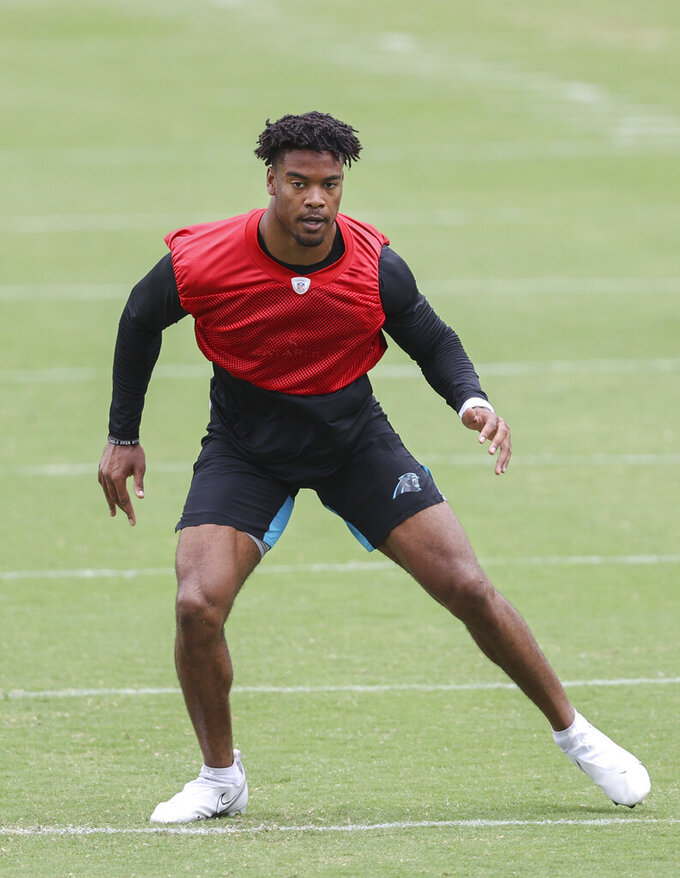 CHARLOTTE, N.C. (AP) — The Panthers plan to move Jeremy Chinn to safety, one year after a stellar rookie season at linebacker.

It’s a move designed, in part, to help prolong Chinn’s NFL career — at 220 pounds, he’s considered undersized for a linebacker — as well as shore up the team’s vulnerable safety position.

Panthers coach Matt Rhule said the decision is contingent upon Chinn's comfort level at the position when he gets to training camp. Chinn is currently returning from offseason cleanup surgery on his knee, so the Panthers are keeping him out of all contact work until the summer as a precautionary measure.

“Obviously he would be a big safety and he would be able to cover tight ends,” Rhule said of the impending move. “He can go fit the run too. It's rare to have a guy that big, with that size and that intelligence level. He's one of those guys that can fill a lot of different roles for us.”

Chinn finished second to Washington edge rusher Chase Young in the AP Defensive Rookie of the Year voting in 2020 after leading all rookies with 116 tackles and becoming the first player in the Super Bowl era to return two fumbles for touchdowns on back-to-back plays. He also had two forced fumbles, one sack and an interception.

Chinn said he doesn’t have a preference on where he plays, adding that he never discussed the move with coaches.

But he knows size played a role.

"That's definitely a factor, me being a smaller linebacker,” Chinn said. “It's not typical you see 218- or 220-pound linebackers in the NFL so that definitely played a part. And as far as making plays, I feel like they can be made at either position. When you're a linebacker you're a little closer to the ball and a little closer to the line of scrimmage. When you're a safety you can also make plays on the ball in the air.”

This isn't completely new territory for the 23-year-old Chinn.

He played more than 30 snaps at safety last season as Panthers defensive coordinator Phil Snow disguised the rookie in certain situations because of his versatility. He also played safety at Southern Illinois.

That's where Rhule initially saw him.

“We went to the Senior Bowl and we saw him and obviously we had a strong feeling for him,” Rhule said of Carolina's decision to trade up to the second round to acquire Chinn with the 64th overall pick in the 2020 draft. “Obviously he has been everything we had expected.”

Chinn has been spending classroom time this year with the safeties instead of the linebackers and feels the transition will be smooth.

Chinn is expected to start alongside Juston Burris. The Panthers consider their safety positions interchangeable.

Defensive end Brian Burns said he thinks having Chinn at safety will be like having a safety blanket in the secondary.

“The safety is the last line of force on the defense and I don't feel like anything is getting past Chinn, to be honest,” Burns said.

NOTES: Rhule said the team is expected to keep second-round draft pick Terrace Marshall Jr. out of practice until training camp so the wide receiver can completely heal from some injuries he sustained at LSU. ... Rhule praised the play of returning tight end Ian Thomas, saying he has taken a big jump in the offseason.