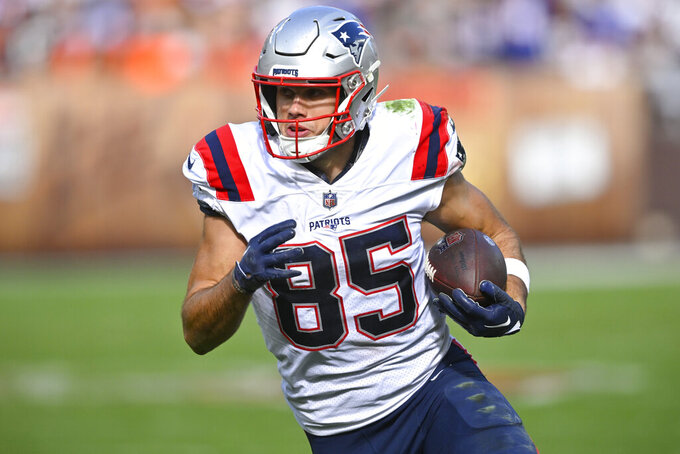 New England Patriots tight end Hunter Henry (85) runs for a touchdown after catching a pass against the Cleveland Browns during the second half of an NFL football game, Sunday, Oct. 16, 2022, in Cleveland. (AP Photo/David Richard) 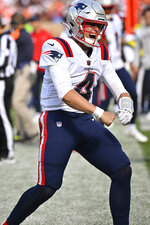 CLEVELAND (AP) — New England Patriots rookie quarterback Bailey Zappe has made the most of the opportunity to get his name out there.

And people are learning how to say it now, too.

A little known fourth-round draft pick who played at Conference USA school Western Kentucky, Zappe — pronounced ZAPP-ee — was pushed into action two weeks ago when starter Mac Jones and veteran backup Brian Hoyer went out with injuries. He now has now won two games in as many starts.

On Sunday, he threw for 309 yards and two touchdowns as the Patriots buried the Cleveland Browns 38-15. It was the 324th career win for coach Bill Belichick, who tied George Halas for second on the NFL's career list.

“We’re just playing football," the 23-year-old Zappe said. “It’s what we’ve been playing since we were 5 years old, so it’s fun to play with these guys.”

Zappe, starting for the second consecutive week, threw second-half TD passes to Tyquan Thornton and Hunter Henry as the Patriots pulled away from the anemic Browns.

Zappe finished 24 of 34 passing a week after throwing for 188 yards and a touchdown in his first start, a 29-0 win over Detroit.

“He has pretty good instincts, but again, there’s a lot for him to learn,” Belichick said of the young quarterback. "He saw some things today and he learned from them, he was able to take advantage and make a couple plays, so it was a solid performance.”

The Patriots’ offense took a while to get going in this one, and the Browns (2-4) never really did.

Late in the first half, Rhamondre Stevenson broke through, bounced left and tore down the sideline for a 31-yard score.

Early in the second half, Zappe hooked up with Jonnu Smith for 53 yards to get down to the Browns 20, and a 13-yard completion to Henry set up first-and-goal at the 2. Three plays later, Thornton grabbed Zappe’s short toss in the end zone.

Later Patriots linebacker Ja’Whaun Bentley hit quarterback Jacoby Brissett as he was throwing, leading to a pick by Jalen Mills that gave them the ball at the Cleveland 40. Three plays later, Zappe found a wide-open Henry, who ran untouched for a 31-touchdown and a 24-6 New England lead.

The Browns' offense produced only a pair of field goals by Cade York in the first half.

Cleveland’s Nick Chubb, who entered leading the NFL in rushing, didn’t have a double-digit gain until late in the third quarter. He had 23 yards rushing and 14 receiving on that drive, but again the Browns stalled — and York came on for a 51-yard field goal.

Chubb finished with 12 carries for 56 yards, both season lows.

Brissett, who finished 21 for 45 for 266 yards with two interceptions, threw a 15-yard scoring pass to Amari Cooper in the fourth quarter but a 2-point attempt failed, leaving it a two-score game with 6:22 left.

New England sealed it with a 19-yard end-around for a touchdown by Thornton. Brissett fumbled the ball away on the Browns’ next drive, leading to Stevenson’s second TD, a 6-yard plunge with 3:40 left.

It was the most points allowed by Cleveland this season and its most lopsided loss.

“Every way you can get beat — offense, defense, special teams, coaching — we got beat," Browns coach Kevin Stefanski said. "They beat us, and we also beat ourselves a few too many times.”

“The plan was they were going to run the ball, based on what’s happened the last two weeks," Garrett said. "But we shouldn’t have made it so easy on him.”

Belichick, who is 324-159 including the playoffs, has a chance to pass Halas next Monday night at home against Chicago — the franchise with which Halas won all his games. Don Shula tops the list with 347.

“You can’t win games in this league without good players, so I’ve been very fortunate to coach a lot of great players and have a lot of great coaches through the years," Belichick said. “A lot of those guys have gone on to great coaching careers and the players, obviously, some are going to the Hall of Fame."

Garrett became the Browns’ career sack leader with 62 1/2 when he stripped the ball from Zappe in the first quarter, but later had to leave the game with an injury. Garrett aggravated a shoulder injury he suffered in a car crash on Sept. 26, but said he plans to play next week. The three-time Pro Bowler surpassed Clay Matthews on the Browns' list.

Browns: Pro Bowl RG Wyatt Teller left in the second quarter with a calf injury and did not return. He will have an MRI on Monday.

Patriots: Host the Bears on “Monday Night Football” on Oct. 24.

Browns: At Baltimore to face the AFC North-rival Ravens next Sunday.