Patriots trade down, take Chattanooga's Strange in 1st round 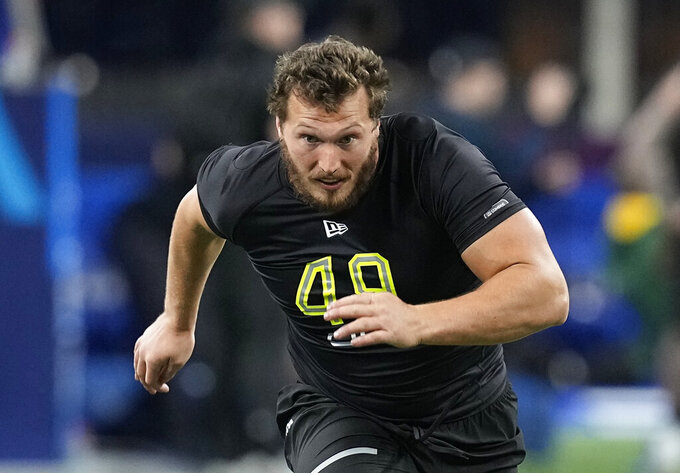 FOXBOROUGH, Mass. (AP) — The Patriots made a move down the board, then another to replenish their offensive line, selecting guard Cole Strange with the 29th pick in the NFL draft on Thursday night.

New England entered the night with needs to fill at linebacker and in its secondary, but chose to first fortify the protection up front around second-year quarterback Mac Jones.

Patience paid off for New England last year when it opted not to trade up during a quarterback-rich draft and still ended up getting its top target in Jones.

This year the Patriots were part of a flurry of first-round trades, dealing the 21st overall pick to Kansas City in exchange for the 29th pick, a third-round pick (94th overall) and fourth-round pick (121st overall).

It marked the 18th straight draft that New England has made at least one draft-day trade.

“I’m glad Cole was there when we picked,” coach Bill Belichick said. “He wouldn’t have lasted much longer.”

Strange said the Patriots were getting a player whose style is “aggressive and relentless.”

“Aggressive and trying to play nasty,” he said. “How the game of football is supposed to be played.”

Belichick said they entertained various scenarios with their original No. 21 spot that included discussions with multiple teams.

The ultimate decision to make the deal with the Chiefs landed the Patriots the 6-foot-5, 307-pound Strange, a five-year starter at the University of Tennessee-Chattanooga who was selected as a third-team FCS AP All-American for the Moccasins as a senior this season.

He met with the Patriots at both his Pro Day and at the Senior Bowl, where he reportedly stood out during the week of practice.

Strange believes that week was key in him proving he could play at the NFL level.

“I think the Senior Bowl helped me quite a bit," he said. “The week of exposure playing against guys from FCS schools, SEC schools, Big Ten schools showed scouts I was competitive enough.”

He played guard and center in college and could be a candidate to fill some of New England’s voids on the line after it traded right guard Shaq Mason and lost utility offensive lineman Ted Karras in free agency.

“He’s long, he’s athletic. He’s physically tough. He’s an aggressive player," Belichick said of the team's evaluation of Cole. “I think he has a good combination of skills, run and pass.. ... All of which will hopefully get better.”

In addition to bolstering the O-line, injecting youth and speed into a defense that has been skewing older at linebacker will likely be a focus for New England in Days 2 and 3 of the draft. That became more evident following the decisions to release Kyle Van Noy and to not re-sign veterans Dont’a Hightower and Jamie Collins

The Patriots also are in need of depth in the secondary after letting cornerback J.C. Jackson leave during free agency.

New England has at least one pick in every round to help replenish its roster, including two picks each in the third and fourth rounds, and three picks in the sixth round. The Patriots begin Friday with one pick each in the second and third rounds.