Pats' QB Jones believes he deserves to be starter vs. Jets 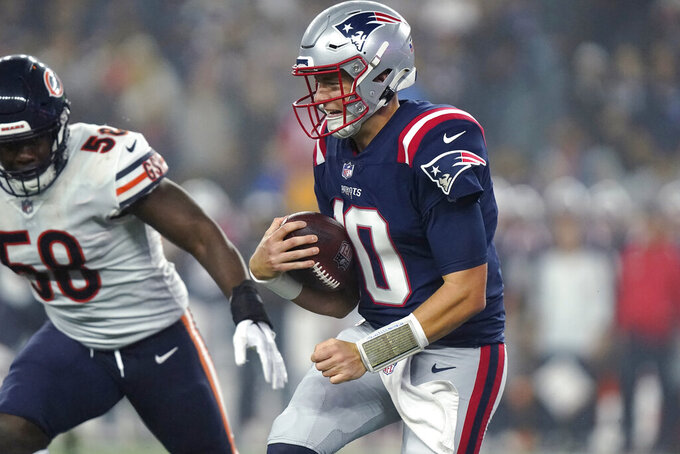 FOXBOROUGH, Mass. (AP) — Mac Jones believes he deserves to start the Patriots' matchup with the Jets on Sunday.

Whether he's definitively been told that he will is a different matter.

“I plan to start every game that I’ve ever played in, Whether that was in pee-wee football or third string at Alabama," he said Wednesday when asked about an ESPN report that he will remain the starter against New York.

"I always try to prepare as a starter. Like I always say, if it’s one snap or 70 I’ll be ready to go and that’s all you can do. You can’t really control anything else. I work really hard and put myself in position to do that and, yes, I think I deserve that.”

Jones struggled in his return to the lineup in Monday's 33-14 loss to Chicago in which he played only three series, threw an interception and got benched in favor of backup Bailey Zappe.

It was Jones’ first game action since he sprained his left ankle late in New England’s loss to Baltimore on Sept. 25.

Zappe provided some instant offense, leading two touchdown drives that took less than four minutes to give his team a 14-10 lead in the second quarter.

But the Patriots had no points on five drives in the second half, which included two Zappe interceptions.

The Patriots had what amounted to a walkthrough on Wednesday and beforehand coach Bill Belichick said only that “We'll see how it goes” regarding what he needed to see from Jones for him to remain the starter.

Jones played with a brace on his left leg in Monday's loss to Chicago, but he wasn't wearing it on Wednesday. His name was also not listed on the injury report when it was released later in the afternoon.

“I feel pretty good. Just trying to get my treatment and I've done a good job with that," Jones said of his ankle. "Just like everybody else I'm just sticking to my routine and trying to get back into that and become a better football player. ... We have a plan. And for me right now that's to become a better quarterback individually and a better player. And I'm doing everything I can to do that. I just want to prove that everyday and that's what I'm going to do.”

During training camp, special teams captain Matt Slater, the Patriots’ longest-tenured player, said he believed this was Jones’ team and that this would be a season for him to assume a leadership role.

He said Wednesday that he stands by that despite Jones’ slow start to the season.

“I do, yes,” Slater said. “I still feel that way. I still have a lot of confidence in him as a player and him as a person. ... I think we’re all doing a little soul searching trying to figure out how we can all play better football.”