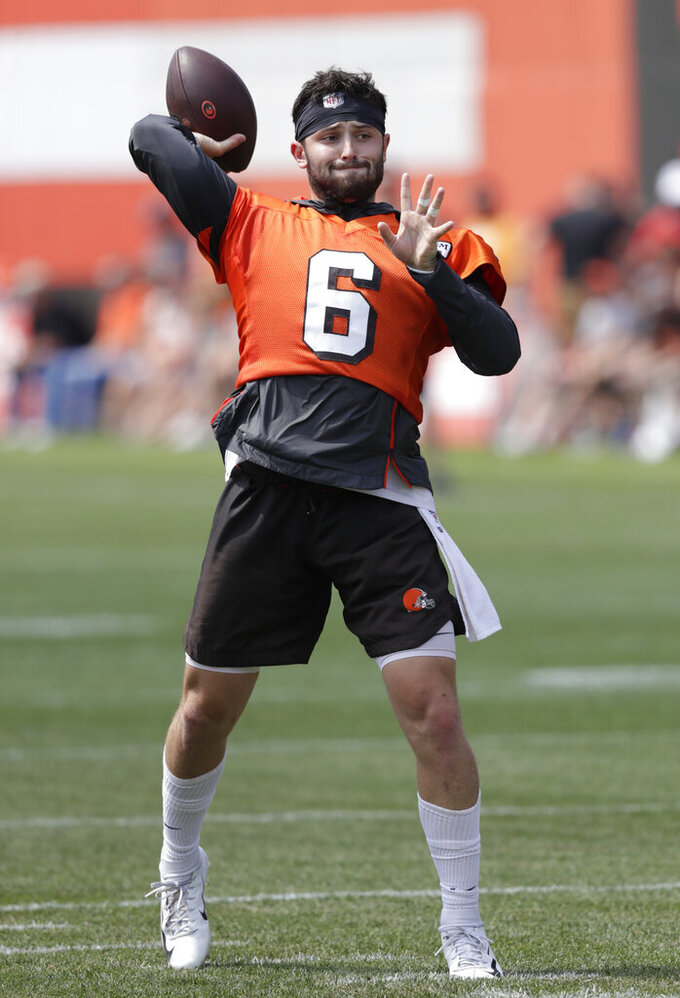 BEREA, Ohio (AP) — Baker Mayfield scurried down the sideline, playfully high stepping as he blew past defenders on the second day of Browns training camp.

Before running out of bounds, he spun the football behind his back, then flipped it over his shoulder at lineman Sheldon Richardson as the fans erupted.

It was a typical afternoon at the office for the charismatic — and undeniably cocky — quarterback who is tasked with ending Cleveland's 16-year playoff drought.

"That's Baker Mayfield. His confidence is always there when he steps on the field," Pro Bowl guard Joel Bitonio said Friday. "It's been really cool to see him evolve as a player, but honestly, he's still the same guy who came to camp with us last year.

"We know with Baker, every time we touch the football, there is a chance to do something good."

Mayfield set an NFL rookie record with 27 touchdown passes last season, breaking the mark shared by Super Bowl champions Peyton Manning and Russell Wilson, after being the No. 1 overall pick out of Oklahoma.

The 2017 Heisman Trophy winner also earned six victories as a starter as Cleveland finished 7-8-1, triggering sky-high expectations this fall that he believes are realistic.

"Winning the Super Bowl absolutely should be the goal every year," the 6-foot-1, 215-pounder said. "This is a tradition-rich franchise that needs to have that standard. It's just getting back to that baseline, setting that foundation and for everybody to realize this is what they should expect. The fans do deserve that, and that's how it needs to be."

Mayfield's offseason was eventful, as well. He married the former Emily Wilkinson on July 7, was prominently featured in the "NFL 100" television commercial and became the league's fifth-most popular player in total merchandise sales.

Browns general manager John Dorsey is confident that the whirlwind of publicity won't be too much, too soon for Mayfield.

"Baker is a little bit more mature than your average 24-year-old man," Dorsey said. "Last I looked, wherever he has been, his teammates have always galvanized to him and that's all you can ask for. It takes a lot of work because it's hard to master that quarterback position, but let's see him grow."

Mayfield has already demonstrated good chemistry with star wide receiver Odell Beckham Jr., who was acquired from the Giants on March 13. Returning wideout Jarvis Landry gives Cleveland arguably the best 1-2 punch at the position in the sport.

With three of the Browns' first five regular season games in prime time, all eyes — and overwhelming pressure — will be on them immediately. Also hanging over their heads is an ongoing run of 11 straight losing seasons.

"The hype around it and everything is something that I'm used to," Mayfield said calmly. "We had those expectations in high school, we had them at Oklahoma. I get it. Now, it's just a bigger platform.

The Browns will work out in pads for the initial time Saturday, which C JC Tretter is looking forward to. "I think it actually makes our jobs easier on the offensive line," he explained. "Without pads, the defensive linemen are in tight jerseys sweating, and you can't grab them or do anything." . Beckham practiced catching punts at the end of the 2-hour, 15-minute session, hauling in a 50-yarder with just two fingers. . Coach Freddie Kitchens said he plans to keep Landry and several other veterans on a "pitch count" over the first five days of camp.