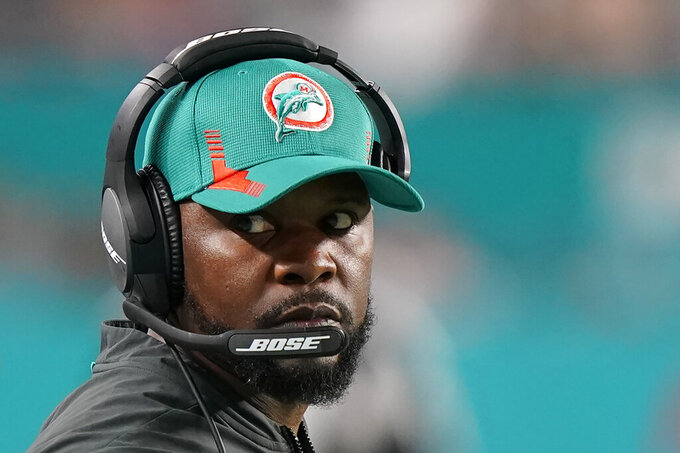 LAS VEGAS (AP) — The football fun and games surrounding the Pro Bowl have not stopped some of the NFL's top players from thinking about the racial inequities spotlighted by former Miami Dolphins coach Brian Flores' discrimination lawsuit against the league.

“I think it goes without saying that we have a problem,” Matthew Slater, the New England Patriots' veteran receiver and special teams ace, told The Associated Press.

“I don’t know if it’s the process," he added. "I don’t know what you want to attribute it to. But you look at the end result for our league to be composed of 60% African-Americans and only have one African-American coach, one minority owner, not a lot of representation within front office and upper management — to me, it says we have a problem.”

Slater's opinion was echoed by other pros Saturday after the AFC Pro Bowl team's light practice at Las Vegas Ballpark, the suburban baseball diamond where both teams are working out before Sunday's game at Allegiant Stadium. The Pro Bowl is back on after a one-year hiatus, and the All-Star game is making its Sin City debut after the previous four editions were held in Orlando.

But Flores' lawsuit served as a reminder to even these elite players that their sport has ample work to do on racial equality.

“I feel like African-American coaches sometimes get the short end of the stick, so we've just got to find a way to get that going,” Indianapolis Colts linebacker Darius Leonard told the AP.

“You know, a lot of owners ... behind closed doors say a lot of things, and as players, we don’t get to see that," Leonard added. "And coaches, with Brian, you lose and it (stinks), and you want to make a change. Somehow we've got to find a way to make an even platform for all races, not just Blacks or white, but for all races. We've got to make sure that it's equal opportunities for everyone.”

Flores sued the league and three teams this week over alleged racist hiring practices for coaches and top executives. The suit claims the league remains “rife with racism” even as the NFL publicly champions racial equality.

Many players and coaches have publicly backed Flores, who went 24-25 in three seasons as the Dolphins' head coach before his controversial firing last month. Flores then interviewed for the New York Giants' coaching vacancy, and the experience played a role in his decision to file the lawsuit.

“I just feel like that situation needs to work itself out, man," Los Angeles Chargers safety Derwin James said. “Because we all need to learn the facts of both sides of the story, and we've got to really see what’s going on. Like I say, I support Coach Flores throughout everything. And like I said, I just want to know what the truth is.”

The Pro Bowl is back after the first 17-game regular season in NFL history, and the league chose to host it in Las Vegas on the same weekend as the NHL All-Star Game and several smaller sporting events in Sin City. Attendance at practices has been fairly light, and the game at Allegiant Stadium is not expected to be a sellout.

The players are not complaining about spending a weekend in Sin City, even when temperatures haven't climbed much above 60 degrees in the high desert.

“I think probably more people lost their money, so it might actually be a little more competitive than you think,” Kansas City offensive tackle Orlando Brown Jr. said with a laugh. “I think it'll be fun. I think it’ll be a competitive game. It’s got that Pro Bowl feel to it.”

In the NFL's latest attempt at innovation that also increases player safety, the Pro Bowl will have no kickoffs.

Instead, the winner of the opening coin toss will have two options: to spot the ball anywhere on the field for the first play, or to decide whether to start on offense or defense from the other team's chosen spot.

The so-called “spot and choose” method was suggested to the league's Competition Committee last year by the Baltimore Ravens partly as a solution to the inequities of the current overtime system.

Buffalo receiver Stefon Diggs could line up for the first time against his younger brother, Dallas cornerback Trevon Diggs.

Their teams haven't met since Trevon reached the NFL last season, but Vegas fans could be treated to the first matchup of the Bills' prolific wideout and the rising defensive back whose 11 interceptions were the most by an NFL player since Everson Walls in 1981.

Smart young players are using the Pro Bowl week as a chance to get to know their competitors in a relaxed, friendly atmosphere — while also picking up knowledge for the future.

Pittsburgh receiver Diontae Johnson, a first-time Pro Bowler as a late replacement, is absorbing everything on his first trip to Las Vegas.

“You can learn a lot, because everybody didn't get here for no reason,” Johnson said. “I was just over there talking to Travis Kelce about how he reads a defense and how he runs his routes, how he extends people. He's given me some pointers, and I feel like I can add that to my toolbox. I feel like I can learn from everybody out here.”