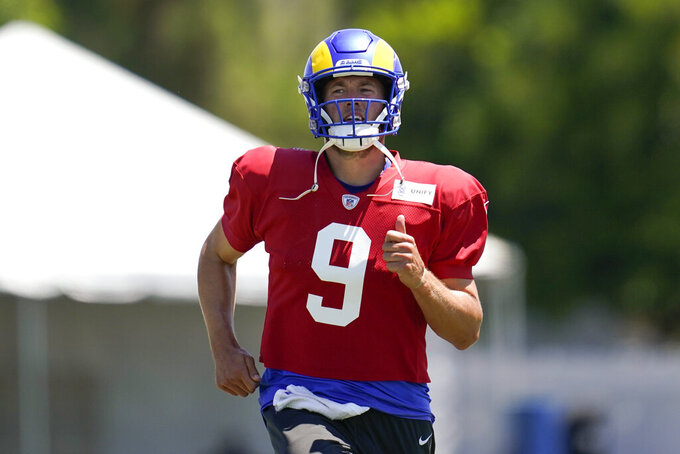 THOUSAND OAKS, Calif. (AP) — Matthew Stafford showed no throwing limitations while fully participating in a scrimmage with the Los Angeles Rams on Tuesday, further underlining the Super Bowl-winning quarterback's declaration that his injured elbow will be fine.

Stafford made all sorts of throws during the lengthy scrimmage at the Rams' training complex, and coach Sean McVay was pleased by the latest step in the veteran quarterback's increased workload.

The 34-year-old Stafford played through elbow pain last season while leading the Rams to the title in his first season with the team. He had an unspecified injection in his elbow during an offseason in which he didn't throw at all in team workouts.

Stafford began throwing to receivers in drills early in training camp, and he has steadily ramped up his workload with a particular focus on building chemistry with new receiver Allen Robinson. Tuesday's practice was the second straight at full participation for Stafford, who says his elbow is more of an irritation than an impediment.

McVay doesn't play his most important players in the preseason, so Stafford won't show off his arm in competition until the Rams' opener Sept. 8 against Buffalo. The Rams' preseason continues Friday night against Houston at SoFi Stadium.

The Rams are thin in the backfield with their top two running backs — Cam Akers and Darrell Henderson — missing this week's practices with what McVay called “soft-tissue injuries.” Youngsters Jake Funk and Kyren Williams got ample first-team snaps in the Rams' scrimmage.

The cuts mean former New York Giants punter Riley Dixon has won the competition to replace Johnny Hekker, the Rams' four-time All-Pro. Hekker, the Rams' punter since 2012, signed with Carolina last March after being released by the Rams.