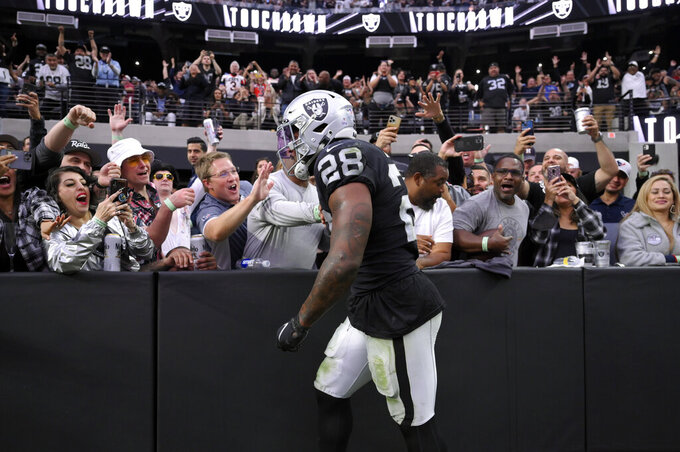 Las Vegas Raiders running back Josh Jacobs reacts with fans after a touchdown during the second half of an NFL football game against the Houston Texans Sunday, Oct. 23, 2022, in Las Vegas. (AP Photo/David Becker)

BETTING LINE: Raiders by 1½, according to FanDuel Sportsbook.

TURNOVER DIFFERENTIAL: Raiders minus-1; Saints minus-10

RAIDERS PLAYER TO WATCH: RB Josh Jacobs has rushed for 441 yards and six TDs the past three games. This is just the eighth time since the merger a running back has run for at least 140 yards and a score in three straight games. Jacobs has 523 yards from scrimmage in the past three games, the second most by a Raiders player in a three-game span to Marcus Allen’s 576 in 1985. His seven carries of at least 10 yards last week were the most by a Raiders player since at least 1991.

SAINTS PLAYER TO WATCH: Chris Olave is on pace to eclipse 1,000 yards receiving in his rookie season. The 11th overall draft choice out of Ohio State has 32 catches for 495 yards and two TDs in just six games (he missed one game with a concussion).

KEY MATCHUP: Raiders WR Davante Adams against a Saints secondary that could be without top cornerback Marshon Lattimore for a third straight game because of his abdomen injury. Adams leads Las Vegas receivers with 37 catches for 509 yards and five TDs. He'll likely draw coverage primarily from second-year cornerback Paulson Adebo, perhaps with help from safeties Tyrann Mathieu and Marcus Maye. The Saints secondary has produced only one interception this season, by Mathieu.

SERIES NOTES: The Raiders have won the past two meetings.

STATS AND STUFF: The Raiders are starting a two-game trip East. They will head to Florida after the game to practice before ending the trip at Jacksonville next week. ... Las Vegas has turned it over only five times this season, with just two coming in the past five games. ... Raiders running backs have been stopped for a loss or no gain a league-low 14 times this season. ... The Raiders have scored at least 29 points in three straight games for the 12th time in franchise history and are seeking their first four-game streak since 2002. ... Las Vegas has allowed TDs on 75% of red zone drives, third worst in the NFL. ... The Raiders scored TDs on all three red zone drives last week. ... Las Vegas is 6 for 8 on fourth down this season, leading to four TD drives. ... Raiders QB Derek Carr has gone three straight games without throwing an INT. ... Las Vegas is averaging a league-high 3:12 of possession per drive. ... The Raiders are averaging 5.43 yards per carry for the best mark through six games in franchise history and 2.1 yards better than the average at this point last season. ... Las Vegas K Daniel Carlson has made 39 consecutive FGs, five shy of Adam Vinatieri’s NFL record. ... Saints coach Dennis Allen had his first head coaching job with Raiders (in Oakland) from 2012 to 2014. He was 8-28 before being fired four games into the 2014 season. ... QB Andy Dalton is scheduled to make his fifth straight start. He had season highs in completions (30), yards passing (361) and TDs passing (four) last week. It was his 32nd game with at least 300 yards passing and seventh career game with at least four TD passes. ... Dalton also was intercepted three times last week with two returned for TDs. ... RB Alvin Kamara had 105 scrimmage yards (56 receiving, 49 rushing) in Week 7. He has at least six catches and 100-plus scrimmage yards in three straight games. ... Olave led the Saints with seven receptions for 106 yards last week and is the only rookie in the NFL with two 100-yard receiving games. He also is the leading rookie receiver in the NFL. ... TE Juwan Johnson tied his career high with 2 TDs receiving in Week 7. ... DE Cameron Jordan had sack and two tackles for loss last week. ... Jordan ranks second among active players with 111 1/2 sacks. ... LB Demario Davis had a sack last week and has five this season, tying a career high.

FANTASY TIP: The Saints defensive front has not been as strong against the run this season as in recent years, raising prospects for the Raiders' Jacobs to produce again this week.