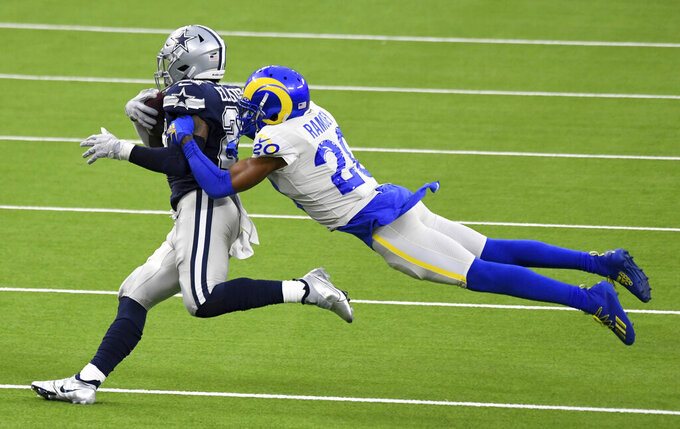 Running back Ezekiel Elliott (21) of the Dallas Cowboys runs for a first down against cornerback Jalen Ramsey (20) of the Los Angeles Rams in the first half of a NFL football game on opening night at SoFi Stadium in Inglewood on Sunday, September 13, 2020. (Keith Birmingham/The Orange County Register via AP)

“This is going to be a great chess match between these two guys, if they line up near each other,” said Staley, the Rams’ first-year defensive coordinator. “This is why as a fan, or someone that covers the game or coaches the game — this is what gets you excited about pro sports, is to see two elite players square off against one another. We all know it’s a team game, but there’s that game within the game and these two guys are as good as I think that I’m seeing right now in the NFL at their positions.”

Of course, Staley will have a big say in how much Ramsey covers Metcalf in the first of two tantalizing matchups this season between the feisty lockdown cornerback and the breakout receiver.

Their only previous meeting came in Week 13 last season, with Metcalf catching all six passes thrown his way for 78 yards as the Rams won 28-12. However, that tape is unlikely to provide much information as to how the tactical battle might play out this time.

Ramsey mostly played as an outside cornerback under former coordinator Wade Phillips, but Staley has the $105 million defender lining up in different positions, including as a hybrid linebacker/safety in certain packages.

“They’re using him as their best player,” Seahawks coach Pete Carroll said. “They’re putting him on guys and moving him around to match up and all of that, very much like Arizona has done for years with (Cardinals CB Patrick) Peterson. He’s a fantastic player.”

Ramsey’s versatility will be needed as Metcalf has become a more complete receiver in his second season. He has 788 yards receiving and eight touchdown catches in eight games after 900 yards and seven scores in 16 games as a rookie. He's showing a better understanding of the route tree to go with his elite physical tools at 6-foot-4 and 235 pounds.

“I think he’s good,” Ramsey said Friday. “I think that he’s even taken a huge step from where he was last year to this year. So yeah, it’s undeniable talent and he’s just taking it to another level.”

The respect Ramsey has for Metcalf was confirmed by watching him run down Cardinals safety Budda Baker to prevent a pick-6 in Week 7.

“I think everybody’s seen that clip by now,” Ramsey said. “Yeah, that would be a guy who I would enjoy to play with. I would like to play with just that effort and not giving up on the play and giving his defense an opportunity, giving his team an opportunity to make a play.”

Most of Metcalf’s big plays this season have come in a more traditional way on the other end of throws from Russell Wilson. Wilson and Metcalf have connected on three touchdown receptions of at least 38 yards this season, and the average pass from Wilson to Metcalf is traveling 14.2 yards in the air, according to NFL Next Gen Stats.

The Rams have done a good job of denying the deep ball, allowing just eight completions that traveled at least 30 yards in the air without a touchdown. Seahawks offensive coordinator Brian Schottenheimer said that is a reflection of both the secondary anchored by Ramsey, and the defensive line led by Aaron Donald.

“But the biggest thing I would say, the coverages and the fronts tie together really nicely,” Schottenheimer said. “Having a guy like Jalen Ramsey in Year 2 for them certainly helps, but when you watch them on film they are very impressive. Top-tier defense, for sure, in most categories.”

Keeping Metcalf from breaking free will be a priority for Ramsey, even if he downplayed the notion of shadowing Metcalf on every play.

NOTES: Outside linebacker Terrell Lewis (shoulder) was limited in practice Friday. Rams coach Sean McVay expects Lewis and LB Leonard Floyd (knee) will play against the Seahawks despite being listed as questionable. ... DTs Donald and Michael Brockers got the day off to rest.