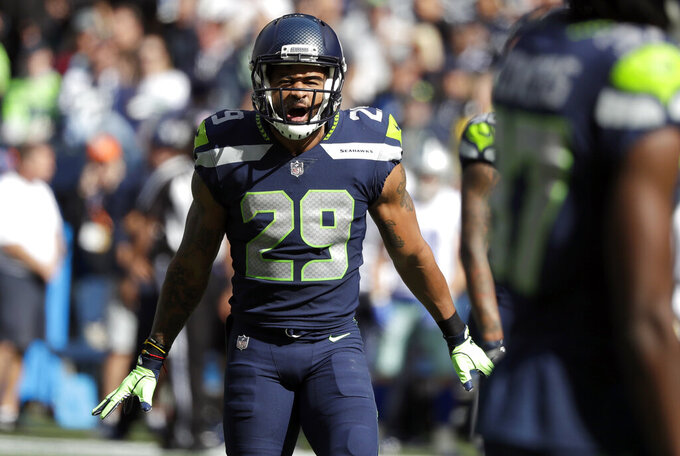 FILE - In this Sept. 23, 2018, file photo, Seattle Seahawks free safety Earl Thomas celebrates a play against the Dallas Cowboys during the first half of an NFL football game in Seattle. The Baltimore Ravens finally made their move during the NFL’s free agent frenzy, securing running back Mark Ingram and safety Earl Thomas on Wednesday, March 13, 2019. (AP Photo/Elaine Thompson, File)

The surprise announcement came prior to a news conference that was scheduled to introduce newcomers Mark Ingram and Earl Thomas, who signed as free agents after passing physicals on Friday morning.

On Friday evening, the Ravens reached agreement on a two-year deal with cornerback and special teams standout Justin Bethel, who played last year with Atlanta following a six-year run with Arizona. Bethel was named to the Pro Bowl in 2013-15 for his play on special teams.

Much earlier in the day, Ravens coach John Harbaugh, Rosburg and his successor, Chris Horton, took their places behind a table on a stage at the team's training facility. Hired by Harbaugh in 2008, Rosburg ruled over a unit that was perennially among the league's best.

"I can tell you, without Jerry Rosburg here there's no way we would have had anywhere close to the success we've had," Harbaugh said.

Rosburg said there were several personal reasons behind his decision, most notably the desire to spend more time with his wife and three children. He reviewed some of his friendships with coaches and players and proudly looked back at what he accomplished with Harbaugh, his long-time friend.

Rosburg concluded his brief speech by saying, "Thank you and farewell." And then abruptly walked off the stage.

"I thought Jerry was going to take a question or two!" Harbaugh said with a laugh. "That's classic Jerry Rosburg."

Horton was the assistant special teams coach. He played football at UCLA before appearing in 29 games with the Redskins from 2008-10.

Ingram and Thomas agreed to terms with the Ravens on Wednesday. The addition of the former Pro Bowl stars eased some of the sting of losing free agents C.J. Mosley, Terrell Suggs, Za'Darius Smith and John Brown earlier in the week.

Ingram is a bruising running back who played eight years with the New Orleans Saints. The 29-year-old will likely take over as a starter for Gus Edwards, who ran for 718 yards as a rookie last year.

Ingram knew his time with the Saints was done after the team signed free agent Latavius Murray.

"It was tough. I've got brothers in that locker room," Ingram said. "But it was just time for me, at this point in my career, to move on. I feel like I have my best years in front of me."

Thomas, a free safety, will step in for Eric Weddle, who was released earlier this month. Thomas has been selected to play in six Pro Bowls.

He worked out a deal with Ravens defensive back Marlon Humphrey to get the number he wore in Seattle — 29 — which is also his age.

"His mom has a track team, so I might throw a little break that way," Thomas said.

Ingram and Thomas fill key spots, but the Ravens hope they'll also be able to provide leadership in the locker room. That job was handled primarily by Weddle, Suggs and quarterback Joe Flacco, who was traded to Denver this week.

"One of the goals is always to bring in guys who have great character and leadership," first-year general manager Eric DeCosta said. "We've tried to do that in the past. That's something that we prioritize. Ability is important, but so is what they bring to the team. These guys measure up really well in those categories."

DeCosta was a bit discouraged by losing four starters earlier in free agency. By Friday, however, was smiling at a table next to Ingram, Thomas and Harbaugh.

"It's a stressful environment at times, especially when you lose players who are a fabric of your team," DeCosta said. "It's tough to see that happen. But we had a process and a plan how we wanted to approach these guys, and it worked out well for us."