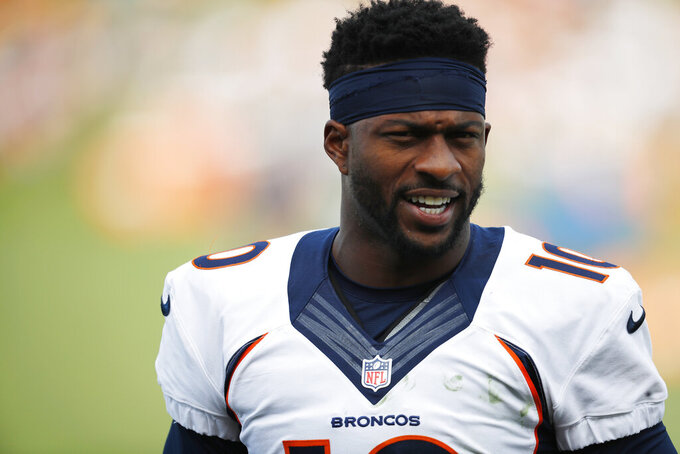 Guard Ronald Leary eventually led Sutton , a second-year pro, away from Sanders , a 10-year veteran who's making his way back from a torn Achilles tendon.

"Obviously it's not good. It can't happen, shouldn't happen," coach Vic Fangio said. "But you've got to be able to react to these things and handle them the right way."

That started with Fangio halting practice and gathering his team to admonish everyone to pick up the tempo after a slow start and to address the tussle between Sanders and Sutton.

Safety Kareem Jackson said Fangio "just made them kiss and make up. So, it was all right after that. I'm sure they're fine."

Sanders and Sutton declined to comment as they walked off the field at different times and entered team headquarters through different doors.

Sanders took Sutton under his wing even before he was drafted in the second round by the Broncos last season. The pair started together after Demaryius Thomas was traded to Houston last season, and Sutton took over as the No. 1 receiver for the final month after Sanders tore his right Achilles tendon in practice.

Sanders' comeback has been going well as he ratchets up his workload. He might miss the entire preseason, though, and make his debut in the season opener at Oakland next month.

Fangio said he wasn't too concerned that the bad blood would linger between the two receivers renowned for their competitive streaks.

"Hopefully it's just a rare episode," Fangio said. "If it continues, then I think it's a problem."