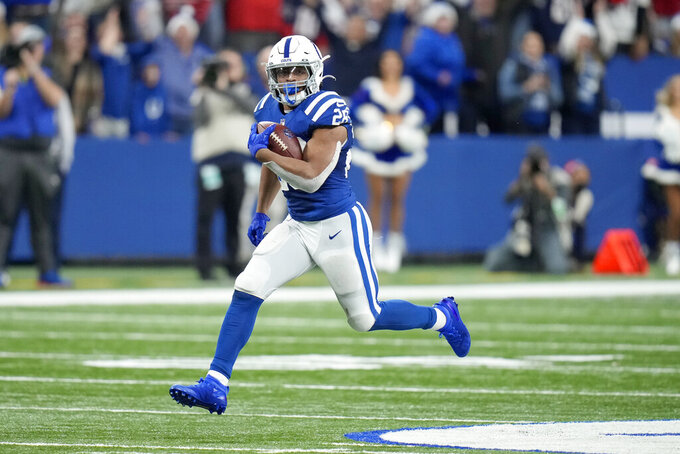 Indianapolis Colts running back Jonathan Taylor runs for a 67-yard touchdown during the second half of an NFL football game against the New England Patriots Saturday, Dec. 18, 2021, in Indianapolis. (AP Photo/AJ Mast)

While no team has clinched a postseason spot in the jam-packed AFC, there never have been more teams alive in the playoff hunt this late in a season.

Only Chicago, Detroit, Jacksonville, Houston and the New York Jets have been eliminated so far, with 27 teams still with at least a sliver of a postseason chance, tied for the most ever with three weeks left in the season.

The only team that has clinched a spot is the Green Bay Packers, who have won the NFC North after beating Baltimore on Sunday.

No team has clinched in the AFC, marking just the sixth time since the eight-division format started in 2002 that no team in a conference had clinched a playoff berth with three weeks left in the season.

The two successful fourth-down conversions this week by the Chargers gave the NFL 301 on the season, topping the 300 from 2018 for the second-most in a season, behind the record 362 last year.

There were 20 more in Week 15, leaving the league on pace to break last year's mark.

But the failed chances for the Chargers this week in the overtime loss to Kansas City got much more publicity.

The Chargers got stopped on fourth-and-goal twice in the first half, becoming the first team to do that since the Chargers did it 37 years to the day on Dec. 16, 1984, against Kansas City, according to the Elias Sports Bureau.

The Chiefs were stopped on a fourth down from inside the 5, marking the first time since at least 2000 that teams combined to fail on at least three fourth downs from the 5 or closer, according to Sportradar.

But while the failed fourth downs proved costly this past week, the Chargers have been successful on them plenty this season, tying for the league high with 15 conversions. They have gone for it on fourth down on 17 drives in field-goal range and scored 51 points on those possessions.

The Chargers weren't the only team struggling on fourth downs near the goal line. The Falcons were stopped three times inside the 10, the first time in the last 40 years that has happened, according to Elias.

Tom Brady had a rare shutout loss this week with a 9-0 defeat to the New Orleans Saints, marking the first time his team had been held scoreless since Dec. 10, 2006, at Miami.

Brady had gone 255 straight starts in the regular season and playoffs without being shut out, the second-longest streak ever for a QB behind Drew Brees, who was never shut out in 304 career starts.

It also was the first time in Brady's career that he was shut out at home.

Pittsburgh's Ben Roethlisberger has the longest active streak without being shut out for any current QB, with the Steelers scoring in his last 225 games in the regular season and playoffs.

Brady's old team, the Patriots, were held scoreless in the first half in their loss to Indianapolis for the first time since Oct. 2, 2016, against Buffalo, when Jacoby Brissett started in the final game of Brady's suspension for “Deflategate.”

New England had gone 99 straight games in the regular season and playoffs without being shut out in the first half, the longest streak in the NFL since at least 1991. The Patriots also held the previous record of 82 straight games from 2006-11.

Jonathan Taylor of the Colts capped off another big performance with a game-sealing 67-yard TD run against New England that gave him a TD run in the 11th straight game.

Taylor is now tied with Priest Holmes (2002) and Emmitt Smith (1995) for the third-longest streak in a season in NFL history. Only John Riggins (12 in 1983) and LaDainian Tomlinson (12 in 2004) have had longer streaks in a season. Tomlinson's streak, which started in 2004 and carried over until the next season, went 18 games, the longest ever.

Taylor has scored 31 career TDs before his 23rd birthday on Jan. 19, with Edgerrin James (35) the only player with more before turning 23.

Chargers quarterback Justin Herbert threw two TD passes and ran for a third score last week to give him a record 71 combined touchdown runs and passes in the first two years of his career, one more than Hall of Famer Dan Marino.