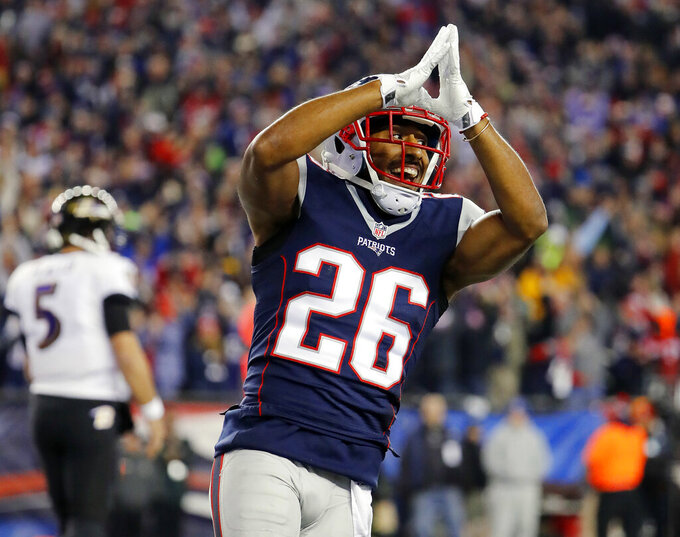 FILE - New England Patriots' Logan Ryan signals a safety during the team's NFL football game against the Baltimore Ravens in Foxborough, Mass. Monday, Dec. 12, 2016. Ryan won a pair of Super Bowls in New England playing with Tom Brady, picked Brady's final pass with the Patriots for a touchdown and has reunited with him on the Buccaneers. (AP Photo/Winslow Townson, File)

TAMPA, Fla. (AP) — Logan Ryan won a pair of Super Bowls in New England while playing with Tom Brady, picked off his final pass with the Patriots for a touchdown and has reunited with him on the Buccaneers.

Getting another ring together in Tampa Bay is a clear goal.

The 31-year-old Ryan, a third-round draft pick by New England in 2013, was a starting cornerback on the 2016 Patriots team that rallied from a 28-3 deficit against Atlanta to win the Super Bowl. He left after that season and spent three years in Tennessee. In an AFC wild-card game at Gillette Stadium on Jan. 4, 2020, Ryan intercepted Brady’s last pass for New England and returned it 9 yards for a score in the final seconds to seal a 20-13 victory.

Ryan doesn’t playfully remind him about that one.

“He has one of those memories where he doesn’t forget it so I don’t have to, but he also knows how to move on pretty quickly, and he moved on and got a Super Bowl after that,” Ryan said. “And I moved on here to do the same. So, it’s just part of our legacy. Tom has been one of my favorite players, one of my favorite teammates, and I’ve always felt like I played my best when I was with him and I played my best against him.

“He demands the best out of you as a competitor going with him and against him. And that’s why I’m excited to get back on his side. We’re not on the field at the same time. So I have to do what I do, which is come out, communicate, lead, demand the best of my teammates, be a great teammate, put my body on the line and make those plays. And it really does take that type of selfless attitude to win championships. It takes that type of bond. And I know me and Tom have a really tight bond and we’re try to bring our two sides together.”

Ryan is one of three former teammates who joined Brady in Tampa during the offseason, along with right guard Shaq Mason and defensive end Akiem Hicks. Brady also lost his pal Rob Gronkowski, who retired.

“I think when you’ve been in the trenches with those guys, you know what they’re all about,” Brady said in June. “I think the more of those guys that you have — that caliber of player that can play at a championship level — the better it is.”

Ryan played both safety spots for the New York Giants over the past two seasons and also took more than 200 snaps as a nickel cornerback. He joins third-year starter Antoine Winfield Jr. and fourth-year man Mike Edwards in the safety room and is excited to work in coach Todd Bowles’ defense.

“What I like the most about it is the aggressiveness and the attention to detail,” Ryan said. “They already told me they’re going to put a lot on me in terms of knowing multiple positions, but also communicating and taking command right away on that defense. Todd played safety as a player, and he’s obviously coached the position as a coordinator and now head coach. So he has high demand and high standards for his safety. So I was obviously brought in for a reason and I don’t take that lightly. I take the responsibility heavy and I want to do a good job with it.”