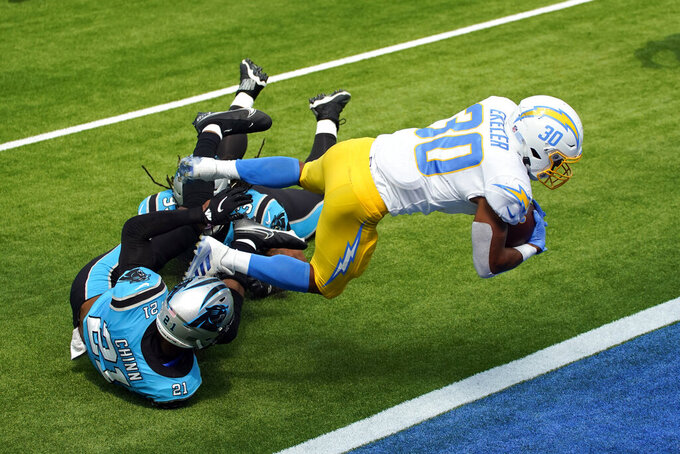 Los Angeles Chargers running back Austin Ekeler (30) lunges into the end zone for a touchdown over Carolina Panthers outside linebacker Jeremy Chinn (21) during the first half of an NFL football game Sunday, Sept. 27, 2020, in Inglewood, Calif. (AP Photo/Ashley Landis )

CHARLOTTE, N.C. (AP) — While Panthers coach Matt Rhule says Carolina’s first win of the season last week against the Chargers was a step in the right direction, he's still concerned about the team’s substandard tackling.

Carolina’s defense replaced eight starters from last year, and the Panthers start three rookies so there was expected to be an adjustment period.

Toss in the fact the Panthers didn’t get much of an offseason because of COVID-19 to work on tackling techniques — because the new coaching staff was frantically working to install a new scheme instead — and it’s not surprising the Panthers might have some problems with tackling.

“It's the biggest issue we have right now,” Rhule said. “It's been two weeks, three weeks really, of just taking (bad) angles.”

Carolina has missed 32 tackles in three games, fifth-most in the NFL, according to Pro Football Reference.

Rhule said wrapping up on tackles isn't necessarily the issue, but rather how players are closing in on an opposing ball carrier.

“It’s just a belief in running to the ball in a certain way," Rhule said. “It's not like we're just missing tackles, although there are some that we've missed like that. But in football you are going to miss tackles, but you have to miss it at the proper leverage.”

In other words, if a defensive player misses a tackle on the outside but forces the ball carrier to the inside where more teammates are waiting to help out, that is more acceptable and encouraged than missing the tackle on the inside and allowing players to scoot outside and find daylight.

“We have to make the play, make the tackle, that’s it,” said linebacker Shaq Thompson, who led the team with 13 tackles last week.

Rhule said on the positive side the Panthers played harder and faster on Sunday against the Chargers than they have all year, which is a sign players are growing more comfortable with the system. He said that has left him “fired up" heading in Sunday's game against the Arizona Cardinals.

“One of the negatives when you play really hard is you have to adjust your angles a little bit," Rhule said. “We will get back at it this week. I feel very certain of it. We will be way better tackling this week than we were last week. We made a huge step last week in terms of pressure and running to the ball. And I think now our guys will see that the angles matter."

The Panthers face an athletic quarterback in Kyle Murray, who is just as difficult to stop with his feet as he is with his arm.

The encouraging news for the Panthers is they might get their best defensive lineman, Kawann Short, back this week after he missed the past two games with a foot issue. Short returned to practice Wednesday along with cornerback Eli Apple, who has missed the first three games with a hamstring issue.