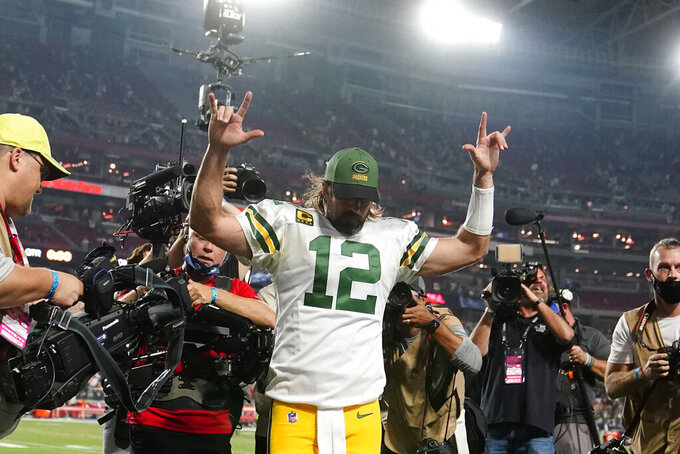 Green Bay Packers quarterback Aaron Rodgers said Friday he sought alternative treatments instead of the NFL-endorsed COVID-19 vaccinations because he is allergic to an ingredient in two of the FDA-approved shots.

Speaking on “The Pat McAfee Show on YouTube and SiriusXM,” Rodgers said: “I’m not an anti-vax, flat-earther. I have an allergy to an ingredient that’s in the mRNA vaccines. I found a long-term immunization protocol to protect myself and I’m very proud of the research that went into that.”

Rodgers, who turns 38 on Dec. 2, did not say what ingredient he was allergic to, or how he knows he is allergic.

Rodgers, who has been tested daily as part of NFL protocols for the unvaccinated, found out he contracted COVID-19 on Wednesday. The reigning NFL MVP said he didn't feel well on Thursday but was much better on Friday.

Rodgers can't rejoin the Packers for 10 days, missing Sunday's game at Kansas City. He must have a negative test to return to the team on Nov. 13.

During the interview with McAfee, Rodgers misquoted the CDC website and offered his explanation for why hasn't taken the Johnson & Johnson vaccine.

Rodgers said the CDC’s website says "should you have an allergy to any of the ingredients, you should not get one of the mRNA vaccines. So those two (Moderna and Pfizer) were out already.”

Rodgers did not say he had an allergic reaction.

He said with some of the public issues involving the Johnson & Johnson vaccine — clotting issues and his “hearing of multiple people who had had adverse events around getting the J&J ... the J&J shot was not even an option at that point.”

The COVID-19 vaccines authorized for use in the U.S. were tested in tens of thousands of people and proven to be both safe and effective at dramatically reducing the risk of serious disease and death. The vaccines now have been given to more than 200 million Americans and that real-world use plus extra government safety tracking have made clear that serious side effects are extremely rare — and that any risk is far lower than the risks posed by COVID-19.

Rodgers' research led him to a treatment he did not detail, and he said the NFL was aware of the treatment protocol he was using, which took “multiple months.”

“The league was fully aware of it upon my return to the Packers (in August),” Rodgers said. "It was at that point that I petitioned them to accept my immunization under their vaccination protocol."

A member of the Packers’ medical staff inquired to the NFL Players Association’s medical director on behalf of an anonymous player who asked if an alternative homeopathic treatment could render him as “fully vaccinated” under the protocols. That player was Rodgers.

The NFLPA's medical director, Dr. Thom Mayer, shared an email from the team and related materials from Rodgers with Dr. Allen Sills, the league's medical chief, and with an independent infectious disease expert, who were asked for an opinion.

The expert, hired jointly by the league and union, said he could not find in his research that the treatment offers reliable and robust COVID-19 protection — that the treatment was not the equivalent of receiving one of the three endorsed vaccines. There was a lack of scientific data demonstrating whether and how well the treatments Rodgers wanted approved would work.

The union and the doctors were never contacted again by Rodgers after his petition and a subsequent appeal were denied.

“And I also said, how come there’s no exemption for medical exemptions, religious exemptions, pre-existing conditions?” Rodgers added. “And they basically said those are all basically exempted but you would be put in the non-vaccinated category.”

Rodgers also told McAfee he has concerns about potential fertility issues had he taken one of the vaccinations.

Many scientists, including three doctors who specialize in reproductive health, have vouched for the safety of vaccinations for couples who want to have a baby and urged people to seek out their doctors or nurse practitioners with any questions. The Centers for Disease Control and Prevention and obstetrician groups also recommend COVID-19 vaccines for pregnant individuals.

Rodgers strongly questioned the NFL's protocols, along with any organization forcing health requirements on individuals.

“I believe strongly in bodily autonomy and the ability to make choices for your body, not to have to acquiesce to some woke culture or crazed group of individuals who say you have to do something,” he said. “Health is not a one size fits all for everybody, and for me it involved a lot of study in the offseason.”