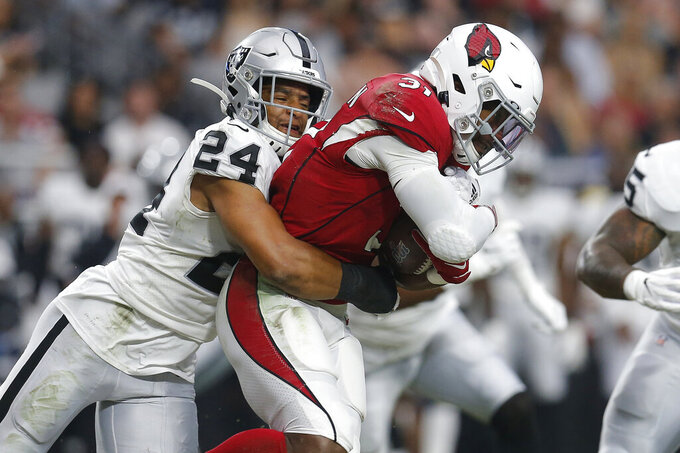 The first-round rookie safety had a starring role on the debut episode of "Hard Knocks," fired up the fans with a pregame visit to the "Black Hole" in Oakland's first exhibition game and has been a loud presence with his hitting and talking on the practice field and preseason games.

"I just think he's wise beyond his years," defensive coordinator Paul Guenther said. "He doesn't act like a rookie. When he's out there, he sounds like a seven or eight-year vet. I think the players take notice of that. Just how he prepares, how he studies, how he communicates with the guys on and off the field. The thing is not too big for him. The players see that. He doesn't act like your typical rookie."

Abram is just what the Raiders need on defense, a player that can help give a unit that has struggled in recent years an identity through his hard-hitting and aggressive play.

Abram and Oakland's other rookie first-rounder, defensive end Clelin Ferrell, have quickly become leaders on a rebuilt defense despite their lack of experience.

"That's the mindset," Abram said. "In college, when you go out there on the field you aren't going to say you got a freshman and senior. You just say it's a team football player making plays. Same now. We are first-year guys. You got some guys in their eighth year and when you go out there you aren't going to be like this rookie made that play, it's going to be Johnathan Abram. We are going out here and we're just a team. What year you are in doesn't really matter, how you can help this team win, that's all that really matters."

Middle linebacker Vontaze Burfict, the leader of the defense based on his experience and knowledge of the system having played for Guenther in Cincinnati, said he has never seen rookies emerge as quickly as leaders as Abram and Ferrell have this month.

Abram is the more vocal, whether it was his arguments with coach Jon Gruden about hitting in practice shown on "Hard Knocks," his debates with quarterback Derek Carr about the proper way to pronounce salmon (Abram doesn't believe the 'l' should be silent) or his constant talking on the field.

"Sometimes we got to tell him to shut up in the huddle but other than that, yeah, he backs it up," Burfict said. "So, you can talk as much as you want as long as you back it up."

Abram has done that so far, emerging as the starter at strong safety for Oakland. He had two tackles in 14 snaps in the exhibition opener against the Los Angeles Rams.

The Raiders are hoping Abram can provide the difference-maker at safety they have lacked ever since Charles Woodson retired following the 2015 season.

With his hard-hitting style that earned him the nickname "Bulldog" from special teams coach Rich Bisaccia, Abram is a throwback to the old days of Raiders safeties when players such as George Atkinson and Jack Tatum instilled fear in opponents.

The Raiders' belief in Abram was evident when they drafted him 27th overall out of Mississippi State and then immediately gave him the No. 24, previously worn by Woodson and Hall of Famer Willie Brown.

He has already impressed one of those predecessors before playing his first real game.

"I told him, 'that edge you have, man, don't lose it.' There's a lot of people with a lot of opinions of him right now. Don't lose that edge. Because if you start doing what other people want you to do, then you can never be who you're supposed to be," Woodson said.

"I like the confidence. But the end of the day it's what he does out there between the lines. You've got to bring the game with the talk and the braggadocio, and I don't have a problem with that. As long as you're out there making plays, you can say whatever you want to say."