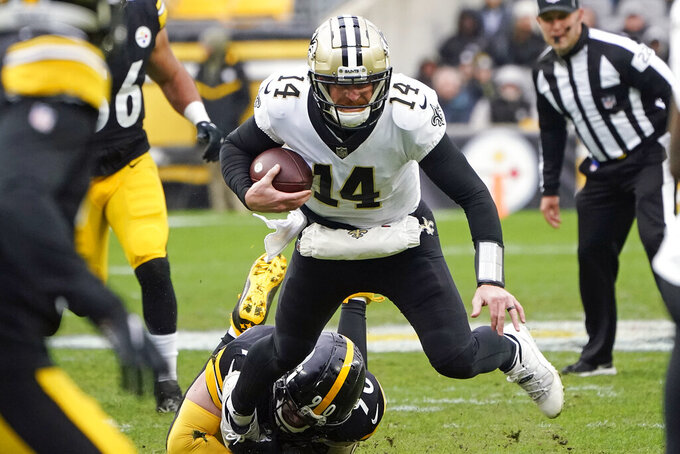 NEW ORLEANS (AP) — Quarterback Jameis Winston's return to the Saints' lineup appears more likely this week than at any time since his removal — in part because of back and ankle injuries — in Week 4.

“We've got to look at everything,” Saints coach Dennis Allen said Monday when asked about the possibility of making a change from Andy Dalton, whose record as a Saints starter dropped to 2-5 after losses the past two weeks.

“We haven’t been doing as well the last couple of weeks,” Allen added. "So, I think we’ve got to evaluate that.”

It isn't just that the Saints have lost two straight. It's how they've lost.

The offense has functioned poorly in both games, and Allen said after studying video of Sunday's 20-10 loss at Pittsburgh, he “felt like there was some opportunities offensively to make some plays that we didn’t capitalize on.”

Winston injured his back in Week 1 but started the next two games, and also played part of that stretch with an injured ankle.

With his usually decent mobility limited, Winston often looked unsettled when he dropped back to pass and it showed in his numbers. During Weeks 2 and 3, Winston completed 61.7% of his passes (50 of 81) for 589 yards with two TDs and five interceptions. New Orleans lost both games.

The Saints' offense appeared to operate more efficiently for most of the first five games Dalton started, but has just 429 yards and 26 points in the past two games combined.

In any event, the Saints (3-7) know that a number of changes need to be made and that merely changing quarterbacks is no panacea.

They're fortunate to be just two games out in the NFC South with seven remaining, but their performance and results to this point do not give them much credibility at all as a potential playoff team in their first season since the retirement of long-time coach Sean Payton.

The defense has had its own issues with missed tackles, an inability to take the ball away and penalties. Six of Pittsburgh's first downs Sunday stemmed from Saints defensive penalties.

“This is a disgusting feeling," defensive end Cameron Jordan said. "In a previous era, you would say these are things that we can’t lose on: penalties, turnover ratio, time of possession. And when you don’t win those three things, it’s clear cut how we didn’t capitalize on opportunities.”

The running game has looked anemic for two consecutive weeks. The Saints had just 48 yards rushing in a Week 9 loss to Baltimore and it got even worse against Pittsburgh, which held New Orleans to a mere 29 yards rushing.

“The last two weeks we haven’t been able to run the ball and that’s hurt us," Dalton said. "We put ourselves in unfavorable situations – third-and-long – and the efficiency on first down and second down hasn’t been good enough.”

Reserve linebacker Kaden Ellis had to play more snaps with starter Pete Werner injured and finished with a solid statistical line. Ellis had a sack, a forced fumble, a tackle for loss and a QB hit on a day when he also was in on seven solo or assisted tackles.

“He did some really good things, which was nice to see,” Allen said.

While Dalton has had a few strong performances this season, he is now coming off consecutive weeks in which he struggled to move the offense and turned the ball over. In the past two weeks, Dalton has thrown three interceptions and passed for just two TDs. But he also has been under a lot of pressure, in no small part because of New Orleans' difficulty running the ball.

6 — The number of games in which the Saints have committed at least two turnovers. New Orleans has made it through just two of 10 games without turning the ball over once.

The Saints on Sunday host another team that has struggled to win as much as expected this season. The defending Super Bowl champion Los Angeles Rams, who've lost three straight to drop to 3-6, invade the Superdome, where New Orleans has gone 2-3 this season.