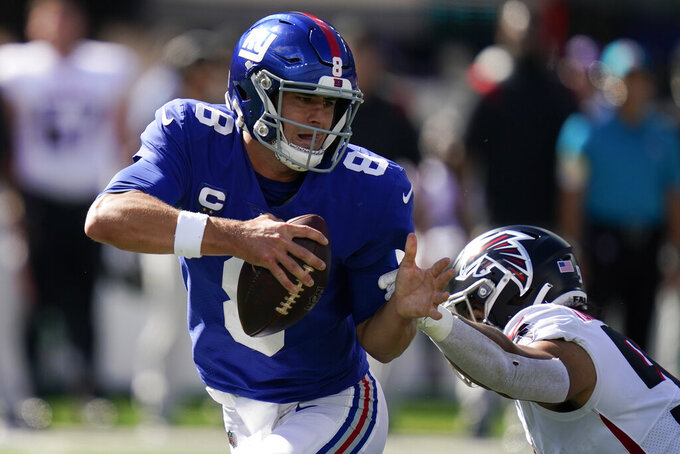 NEW ORLEANS (AP) — When the New Orleans Saints finished polishing off the Patriots last weekend, they did something they had not done for about a month.

They boarded a plane for New Orleans, where they had not been as a team since Aug. 28, when they evacuated to escape the wrath of Hurricane Ida.

As the plane touched down at Louis Armstrong International Airport and a member of the crew welcomed the club to New Orleans, “The whole plane just erupted,” offensive lineman James Hurst recalled after practice this week, as the Saints (2-1) prepared to host the New York Giants (0-3) on Sunday.

“Everyone’s so excited to be back, to be in the city, to be amongst the people of the city that love us so much, to help out where we can,” Hurst added. “To know that we play such a big role in the city — everyone’s looking to us, looking to us for hope.”

As if a transition at quarterback following Drew Brees' retirement wasn't challenging enough, the Saints had to cancel their final preseason game and spend the first three weeks of the regular season at temporary digs in the Dallas area.

They've come through that period with two victories and now look forward to their first game before a capacity crowd in the Superdome since their overtime playoff loss to Minnesota two seasons ago on Jan. 5, 2020, before the COVID-19 pandemic swept across the United States.

Jameis Winston, now Brees' successor with the Saints, remembers the challenges of playing in front of deafening crowds in the Superdome as a visitor with NFC South rival Tampa Bay. Now he eagerly awaits his first regular-season start on that same field for the home team.

“I just think this community embraces and loves football more than a lot of communities,” Winston said. "It's a culture. As a kid growing up in Alabama, I know about the Saints. I know how they live and breath football down here.”

It wouldn't be realistic to expect this game, emotionally speaking, to rival the first home game of the 2006 season — a year after Hurricane Katrina had struck on Aug. 29, 2005, ripping open a hole in the dome's roof, flooding 80% of the city and displacing the Saints for a whole season.

But the atmosphere is bound to be more charged than usual — the last thing the winless Giants need.

The Saints waited as long as they did to return after Ida so most city services would be restored and players would have an easier time moving into more permanent housing from the training camp hotel. Still, it wasn't ideal and there were distractions this week.

Returner and receiver Deonte Harris had roof leaks which caused mold to fester on walls and ceilings.

Rookie linebacker Pete Werner was greeted by a “nasty smell” at his place. He launched into a four-hour process of throwing out trash and cleaning surfaces. Then he went online and bought scented candles.

No players reported major structural damage and said their greatest concern was for the harder-hit pockets of the New Orleans area.

“All cosmetic,” Cam Jordan said of damage at his home to his fence, gutters, landscaping and exterior lights. “I'm more worried about the city, the community and honestly there are so many more families that are affected by this than I am.”

Giants inside linebacker Tae Crowder of Georgia has come a long way since being the last pick in the 2020 draft. He started six games as a rookie and scored a game-winning touchdown on a fumble return against Washington. “Mr. Irrelevant” takes on a big role this week. Fellow linebacker and team captain Blake Martinez is lost for the season with a knee injury. Crowder will get the helmet with the green dot and take the play calls for Pat Graham’s defense.

Crowder took over against Atlanta last weekend after Martinez was hurt. He had a team-high 11 tackles in the 17-14 last-play loss to the Falcons.

The Saints have yet to throw for as many as 200 yards in a game in the Winston era, but Winston has still made plays as a passer, throwing for seven TDs, including a 55-yarder to Harris.

“You always want to play a balanced game, but some games might be more pass-heavy than run and some might be more run-heavy," running back Alvin Kamara said. “I don't think it's a thing where it's a weakness passing-wise.”

With starting wide receivers Sterling Shepard and Darius Slayton dealing with hamstring injuries, the Giants could go with backups Collin Johnson and C.J. Board.

Johnson, acquired on waivers from Jacksonville, had a career-high five catches for 51 yards against Atlanta. Board, who handles kickoff returns, made one catch for 38 yards against the Falcons.

Speedster John Ross, a free agent signee who was placed on injured reserve with a hamstring issue before Week 1, was back practicing this week.

The Giants also could have a fourth different starting left guard if Ben Bredeson, who started in Week 3, can't come back from a hand injury.