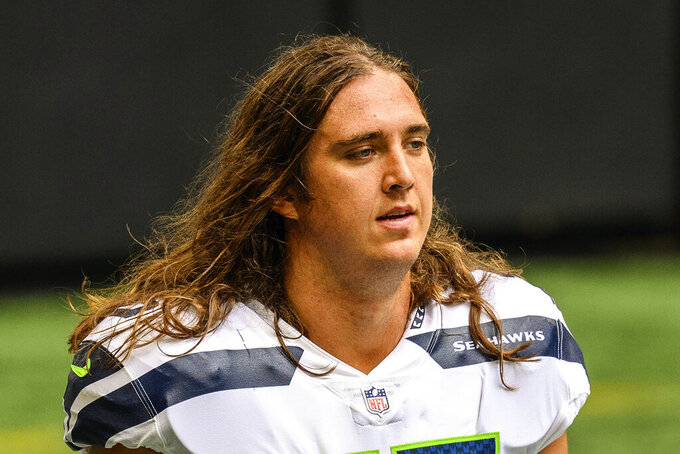 FILE - Seattle Seahawks offensive tackle Chad Wheeler (75) is shown before an NFL football game against the Atlanta Falcons in Atlanta, in this Sunday, Sept. 13, 2020, file photo. The Seattle Seahawks said Wednesday, Jan. 27, 2021, that offensive lineman Chad Wheeler is no longer a member of the team following his arrest last weekend for investigation of domestic violence. (AP Photo/Danny Karnik, File)

Prosecutors also asked a judge to require Wheeler be placed on electronic home detention, and wear an ankle monitoring device be equipped with GPS monitoring.

The charging decision by prosecutors ended a whirlwind day that included Wheeler being waived by the Seahawks, according to the NFL's official transactions wire after details emerged of the alleged assault and his arrest.

“The Seahawks are saddened by the details emerging against Chad Wheeler and strongly condemn this act of domestic violence. Our thoughts and support are with the victim. Chad is a free agent and no longer with the team,” the Seahawks said in a statement.

Wheeler joined the Seahawks in 2019 and appeared in five games this season. His contract with the team was set to expire with the start of the new league year in March.

Wheeler was arrested by police in the Seattle suburb of Kent, Washington, and booked into the King County Jail early Saturday for investigation of felony domestic violence. He had an initial court appearance Monday and was released from jail Tuesday after posting $400,000 bond.

Officers went to a residence in Kent on Friday night after the victim and family members called 911 and reported the victim had locked herself in a bathroom after being attacked, according to the case file.

Arriving officers heard a woman screaming, forced their way into the apartment and broke down the door to the locked bathroom, documents said. Police found Wheeler with the woman, who was crying with her face covered in blood and her arm hanging limply at her side, court records say.

The officers eventually detained Wheeler, who was uncooperative and yelled, “Sorry!” and “I don’t beat women!” according to court documents. A Taser was also used against Wheeler, which the charging documents said had little effect.

At a hospital, the woman told investigators Wheeler told her to stand up and bow to him and when she refused, he threw her on the bed, choking her and trying to smother her, court documents say.

She began to lose consciousness and tried to fight back but Wheeler grabbed her arm and twisted it, the court file says. She then lost consciousness for an unknown length of time.

When she regained consciousness, the woman saw Wheeler by the bed and he said, “Wow, you’re alive?” Then she ran into the bathroom, where she called her family and 911, according to the case file.

Wheeler picked the lock to the bathroom and entered, then began apologizing. Officers arrived at the scene and arrested Wheeler.

Charging documents say the woman had a fractured humerus bone and dislocated elbow in her left arm. She also had lesions on her neck, some in the shape of fingermarks.

Doctors also said they believe the swelling and bruising to the victim's face was the result strikes and punches, according to the charging papers. The victim said she did not remember Wheeler striking her.

Prosecutors say if convicted on the charges, sentencing range can be anywhere from eight to 12 years.