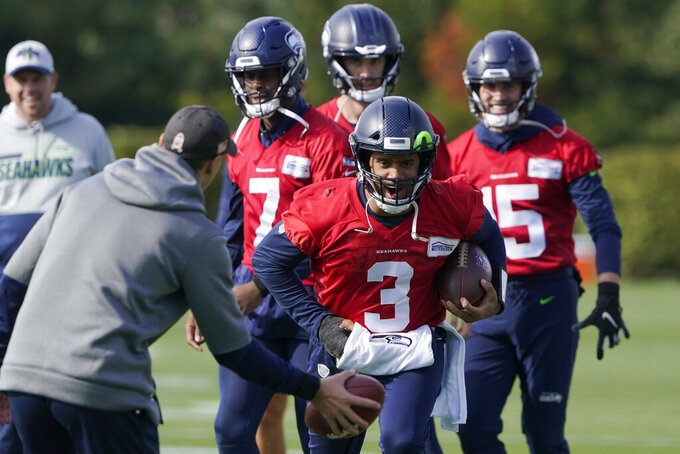 Seattle Seahawks quarterback Russell Wilson (3) keeps his injured hand in a pad as he runs through a warmup drill with backup quarterback Geno Smith (7) behind him during NFL football practice, Wednesday, Oct. 13, 2021, in Renton, Wash. Wilson had surgery on his hand last Friday, and Smith is expected to be the starting quarterback Sunday when the Seahawks play the Pittsburgh Steelers on the road. (AP Photo/Ted S. Warren)

RENTON, Wash. (AP) — The Seattle Seahawks placed quarterback Russell Wilson and running back Chris Carson on injured reserve Friday, a move that will keep both players out until at least mid-November.

Coach Pete Carroll had said earlier in the day that Wilson would be placed on IR and the team was considering a similar move with Carson due to a lingering neck issue.

Both players will be unavailable at least until Seattle's game on Nov. 14 against Green Bay.

Wilson is recovering from surgery on his right middle finger. Wilson has started every game of his career — 165 games regular season and playoffs combined — until now.

The Week 10 matchup with the Packers will be five weeks following Wilson’s surgery. Geno Smith will start this week for the Seahawks.

“I’m hoping that he’ll feel really comfortable in the game, because he looks great in practice and everything’s gone well,” Carroll said of Smith.

While the move with Wilson was expected, the week started with optimism that Carson would be able to play after he missed last week with a neck issue. At first, Carroll was hopeful that Carson would practice late in the week, but he was a nonparticipant all week.

“It is a delicate thing. He’s got something going on in his neck, so we’ve got to make sure that we do it really well,” Carroll said. “And so we’re going to take care of him and this just seems like the right decision.”

Carson is Seattle’s leading rusher with 232 yards and three touchdowns in his four games played. Alex Collins will start for the second straight week and Seattle expects Rashaad Penny to return from injured reserve in the next couple of weeks.

Seattle activated offensive lineman Ethan Pocic and rookie cornerback Tre Brown from injured reserve to take the open roster spots. Both could end up getting playing time against the Steelers.