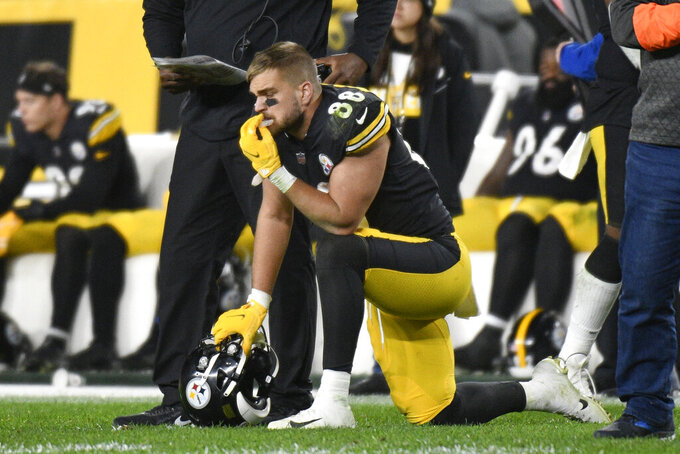 Seahawks linebacker Darrell Taylor had movement in all of his extremities after leaving Seattle's game Sunday night against Pittsburgh late in the fourth quarter on a stretcher with an unspecified injury.

Taylor fell to the ground after a collision during a 3-yard gain by Pittsburgh’s Najee Harris with the Steelers driving near midfield with 3:10 to play in regulation.

Taylor was on the ground for more than 10 minutes while being attended to by medical staff. Players from both sides came out to offer support. He was taken by ambulance to a hospital.

After the Steelers won in overtime, NBC reported Taylor had movement in all of his extremities.

Kareem Hunt left the field on a cart and Baker Mayfield's left arm was in a sling after the game on a rough day for the Cleveland Browns.

Hunt suffered a calf injury in the fourth quarter of a 37-14 loss to Arizona on Sunday. Browns coach Kevin Stefanski said Hunt did not injure his Achilles tendon and will undergo further imaging on Monday.

Mayfield reinjured his left shoulder but plans to play Thursday night against Denver.

“I mean, it dislocated again and then slipped out again on a non-contact play, so just got to figure out a way to get better,” he said.

Dallas quarterback Dak Prescott suffered a calf strain on the game’s final play in a win at New England and will be evaluated Monday.

“It was a little pain,” Prescott said. “I didn’t like what I felt. I could’ve kept playing if I had to. I’ll be fine.”

Three other wide receivers got hurt, too.

Kadarius Toney didn’t make it through the first drive for the New York Giants. Parris Campbell hurt his foot in the first half during Indianapolis' 31-3 win over Houston on Sunday. T.Y. Hilton didn’t finish the game after making his season debut with the Colts, but he said his quad injury isn't serious.

Toney had three catches for 36 yards before the rookie first-round pick aggravated an ankle injury. C.J. Board was carted off the field late in the half with a broken arm, further depleting New York’s receiving group. The Giants were routed by the Rams 38-11.

Houston safety Terrence Brooks will spend the night in Indianapolis because of a bruised lung. Brooks left in the first half after getting beat on a 51-yard TD pass from Carson Wentz to Campbell. Texans coach David Culley already ruled Brooks out of next week’s game.

Chiefs tight end Jody Fortson was carted off with a torn left Achilles tendon in the third quarter of Kansas City’s 31-13 victory at Washington. Teammate Anthony Hitchens injured his right elbow on a hit in the second period that was flagged for unnecessary roughness. The linebacker is set to have an MRI Monday.

Packers center Josh Myers was helped off the field after injuring his knee on a running play on the opening possession and did not return. Green Bay also lost safety Darnell Savage during a 24-14 win at Chicago. Savage was evaluated for a concussion after he was hurt making a tackle on the first play from scrimmage of the second half.

Chicago defensive back Deon Bush left with a quad injury in the second half.

Baltimore lost another running back when Latavius Murray left in the third quarter with an ankle injury during a 34-6 win over the Chargers. Ravens center Bradley Bozeman left with a back injury on the first drive of the second half.

Bengals guard Jackson Carman, who returned from the COVID-19 list, left Cincinnati’s 34-11 victory at Detroit in the third quarter because of an illness. Lions defensive end Nick Williams injured his left ankle in the first quarter.

The Raiders lost linebacker Nick Kwiatkoski (foot) in the first half and safety Roderic Teamer (shoulder) early in the fourth quarter during a 34-24 win at Denver. Broncos rookie linebackers Baron Browning (concussion) and Andre Mintze (hamstring) and linebacker Alexander Johnson (chest) went down in the first half.