Steelers have plenty to shop for with 24th overall pick 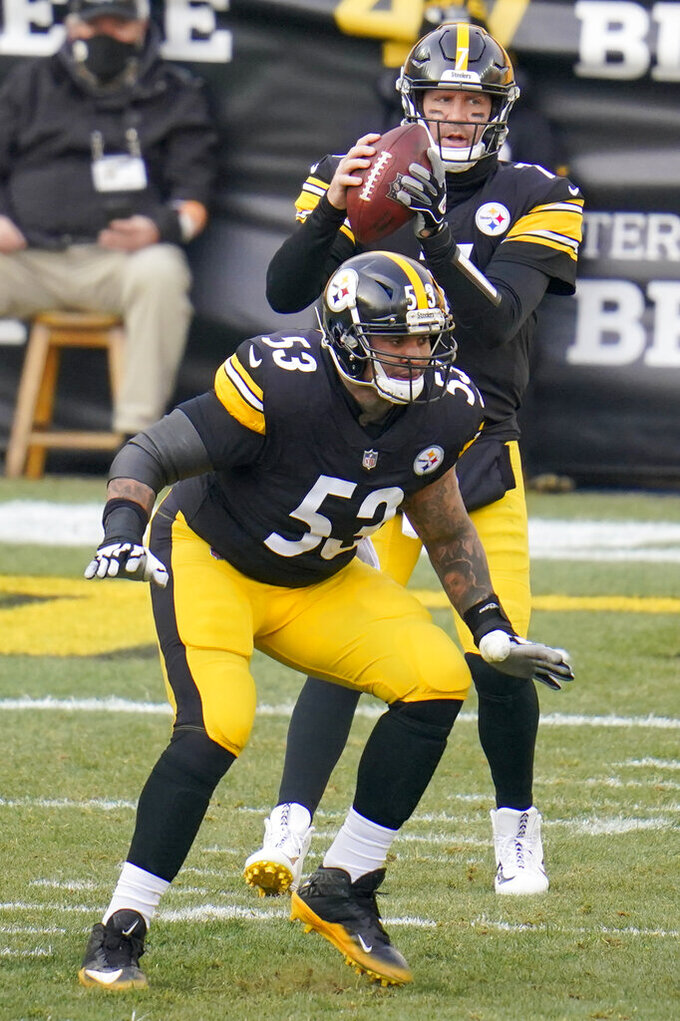 FILE - Pittsburgh Steelers center Maurkice Pouncey (53) snaps the ball and blocks for quarterback Ben Roethlisberger (7) during the first half of an NFL football game against the Indianapolis Colts in Pittsburgh, in this Sunday, Dec. 27, 2020, file photo. The Steelers have the 24th overall pick in the draft and could use it to find a replacement for longtime Pro Bowl center Maurkice Pouncey, who retired during the offseason. (AP Photo/Gene J. Puskar, File)

Roethlisberger, at least for now, isn't going anywhere. The 39-year-old restructured his contract to make it more team friendly and ensure he could stick around for an 18th season. The move freed up a little — emphasis on little — money to keep the likes of wide receiver JuJu Smith-Schuster and cornerback Cam Sutton.

Yet it couldn't fully stop the attrition the Steelers knew was coming following a 12-5 season that ended with an embarrassing blowout loss at home to Cleveland in the opening round of the playoffs.

With no money to spend on the open market, Pittsburgh needs to replenish its talent base through the draft. The urge for immediate help is a little bit higher now than it has been in recent years after linebacker Bud Dupree, running back James Conner and slot cornerback Mike Hilton all left in free agency.

Yet there's a need at quarterback, too, a position where the Steelers have been kicking the can down the road for years. The time to actually make a decision is coming. Maybe it's already here.

At the moment the Steelers have four quarterbacks on the roster. Roethlisberger's three backups are either on one-year deals (Josh Dobbs and Dwayne Haskins) or are in the final season of his rookie contract (Mason Rudolph)

There's a chance Roethlisberger may play beyond 2021, but with Smith-Schuster, cornerback Joe Haden and right guard David DeCastro potentially nearing the end of their time in Pittsburgh, next season has the feel of one last ride.

The Steelers used the 2020 offseason to give Roethlisberger everything he needed in his return from right elbow surgery, including taking wide receiver Chase Claypool in the second round of the draft. Claypool was a revelation, scoring 11 touchdowns and giving Pittsburgh a legit downfield threat.

How the Steelers approach the draft this time around could provide a glimpse at how they view 2021, whether it's the last year of an era or the beginning of the next.

Everyone from team chairman Art Rooney II to general manager Kevin Colbert to head coach Mike Tomlin has talked about the necessity to address the NFL's 32nd-ranked running game.

The inability to run the ball allowed defenses to tee off on Pittsburgh's short passing game, one of the main reasons an 11-0 start devolved into a 1-5 finish.

Finding a capable replacement for Pouncey — himself a first-round pick back in 2010 — would make a lot of sense. Maybe in the form of Alabama center Landon Dickerson. Or maybe a left tackle to protect Roethlisberger's blind side like Oklahoma State's Teven Jenkins fits.

“The draft itself, it is stronger at the tackle position than it is at the interior,” Colbert said in February. “Center and guard, traditionally, is not a very strong group. In any draft, the tackles are unusually deep this year. I think we can add players through the draft.”

Having a road grader along the offensive line would help, but so would finding someone who can emulate Le’Veon Bell, a two-time All-Pro during his five seasons in Pittsburgh. Alabama’s Najee Harris fits the bill here.

Harris can catch the ball out of the backfield (43 receptions in 2020) and has size and speed. Conner offered those during his tenure, but only occasionally as he struggled to stay healthy. Harris is 6-foot-2 and 230 pounds and proved plenty durable while playing for the Crimson Tide.

QB OR NOT QB

Or maybe the Steelers finally get around to figuring out an eventual heir to Roethlisberger. The draft is deep in quarterbacks, and there's a chance a good one might be available at 24.

Yet that would have little effect on 2021. And the idea of Roethlisberger grooming someone during what could amount to a farewell tour seems farfetched. Still, Colbert indicated in February that nothing the Steelers did in free agency (which they used to re-sign Dobbs) would preclude them from looking at quarterback in the draft.

There will be a post-Roethlisberger era. The Steelers began it when they signed Tomlin to an extension that runs through 2024. Maybe finding someone — really anyone at this point — to play quarterback in 2022 might be the next logical step whether Roethlisberger is comfortable with the idea or not.