Steelers' season could rest in the hands of QB Devlin Hodges 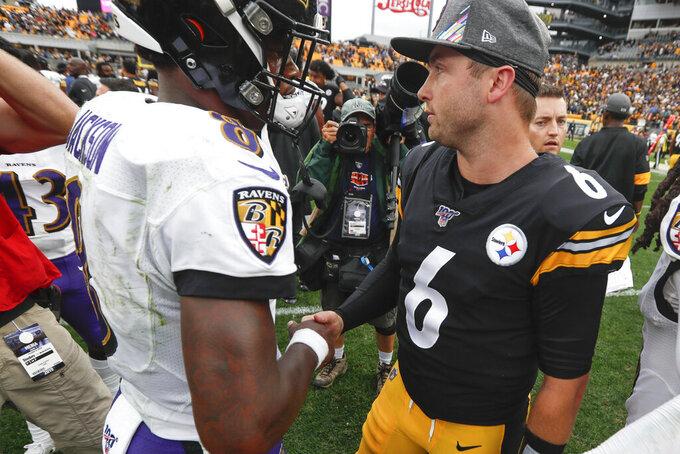 PITTSBURGH (AP) — Out of work on the first Saturday in September after getting cut by the Pittsburgh Steelers, Devlin Hodges sat in his parent's house in Kimberly, Alabama, texted his high school coach Dusty Goode and asked Goode if he wanted to come over and watch some football.

As afternoon turned to evening and LSU slowly pulled away from Texas, the quarterback who as a senior at Mortimer Jordan High embraced Goode's decision to install the option because it gave the Blue Devils the best chance to win — even though his numbers would dip and potentially limit his college options — talked about the future.

There was a chance to work out for the New York Jets. Maybe the XFL would find room for the most prolific passer in Football Championship Subdivision history. Hodges wasn't sure of anything other than the notion he wasn't ready to bail.

"He ain't that way," Goode said Wednesday. "And look where he's gone. He's gone from not having nothing, to having everything."

Or, at the very least, a shot at everything. The player Alabama coach Nick Saban considered too small to suit up for the Crimson Tide, who is a champion duck caller in his down time, who wasn't signed after coming out of Samford last spring and only made the Steelers after performing well in a tryout, could run onto the field with the starters on Sunday night when Pittsburgh (1-4) visits the Los Angeles Chargers (2-3).

While Mason Rudolph returned to practice Wednesday, an important step in his recovery from a frightening concussion suffered in Sunday's loss to Baltimore , Hodges worked with the starters and didn't exactly look out of place. Heady territory for the 23-year-old affectionately known as "Duck" by his teammates after Steelers coach Mike Tomlin dubbed Hodges "Duck Dynasty" during offseason workouts.

Yes, in a way things have happened quickly. Hodges went from jobless to the practice squad to primary backup to completing 7 of 9 passes for 68 yards in the second half of a pivotal division game at Heinz Field in the span of a month. He knows his story is unlikely. At least, to everyone else but Hodges.

"It's a crazy process, even from the beginning, coming here for a tryout," he said. "I told some people before that if I play in the NFL five years, 10 years, this whole kind of story will fit who I am. It just shows (with) hard work and confidence and belief in yourself, you can accomplish your dreams."

Hodges talks with a bit of a twang that belies his upbringing in Kimberly, a town of about 3,000 located 20 minutes north of Birmingham. He's been throwing touchdown passes since he was 5 but when Goode arrived to take over at Mortimer Jordan in 2013, the Blue Devils were in the process of rebuilding.

So Goode asked Hodges to run the option, a decision that limited Hodges' opportunities to show off his right arm but also kept the team's defense off the field. Hodges' numbers were modest — he threw for 1,748 yards and 15 touchdowns as a senior — but the team turned a corner. Mortimer Jordan reached the playoffs that fall, the start of a rise that's made them a perennial contender in Alabama.

"It was a big deal," Goode said. "He kind of helped create the foundation and we've reaped the benefits ever since."

Still, big-time colleges weren't interested in the 6-foot-1 Hodges. Goode told anyone who would listen that Hodges "doesn't measure well" but played with a gunslinger mentality that reminded him a bit of Hall of Famer Brett Favre. Saban wasn't interested, telling Goode that Hodges "wasn't big enough." So Hodges eventually chose to stay close to home, playing four years at Samford, just down I-65 in Birmingham.

All Hodges did over four years is set an FCS record by throwing for 14,584 yards, breaking the mark set by former Tennessee Titans star Steve McNair. Still, when the NFL draft came and went, his phone didn't ring. It stayed silent even after teams started making offers to undrafted free agents. The Steelers eventually brought him in for a look, and it didn't take long for all the mix of talent and fearlessness Goode saw back in high school to become evident.

"He had this feel about him," Steelers cornerback Mike Hilton said. "We seen him make a lot of throws that probably undrafted guys trying to make a team wouldn't make."

Though he played well during camp and the preseason, he got caught up in the financial realities of the NFL. The Steelers were set at quarterback with Ben Roethlisberger, Mason Rudolph and Josh Dobbs. So Hodges returned to Alabama and hung out, a man without a team for the first time in his life. It was weird. It also didn't last.

Pittsburgh traded Dobbs to Jacksonville on Sept. 9. Then Roethlisberger was lost for the season with an elbow injury on Sept. 14. When Rudolph fell unconscious to the Heinz Field turf on Sunday after taking a hit to the chin by Baltimore's Earl Thomas, Hodges trotted into the huddle without a care in the world.

Back in Alabama, Goode was reviewing tape at the school's field house. He set his phone on a window sill — the only place it could get decent reception — and checked it every 30 minutes or so. In the middle of the afternoon, the messages came in a deluge. All of them saying the same thing: "Duck is in! Duck is in!"

Hodges led Pittsburgh to a pair of go-ahead scoring drives. Though Baltimore pulled out the victory in overtime after JuJu Smith-Schuster's fumble, Hodges — for at least two quarters — looked as if he belonged. Watching the highlights, Goode wasn't surprised.

"We talk to our players, before the game is played, it's played 1,000 times in your head," Goode said. "Devlin had played that game over and over. He's thrown TD passes. He's run some in. He's led them on drives. He might not have done it physically yet, but he's done it mentally."

The chance to do both could arise again on national television on Sunday night in Los Angeles, where Pittsburgh's fading chances of getting a wayward season back on track might rest on the slight but swaggering shoulders of a player nobody wanted six months ago.