Step by step: Herbert focusing on footwork going into Year 3 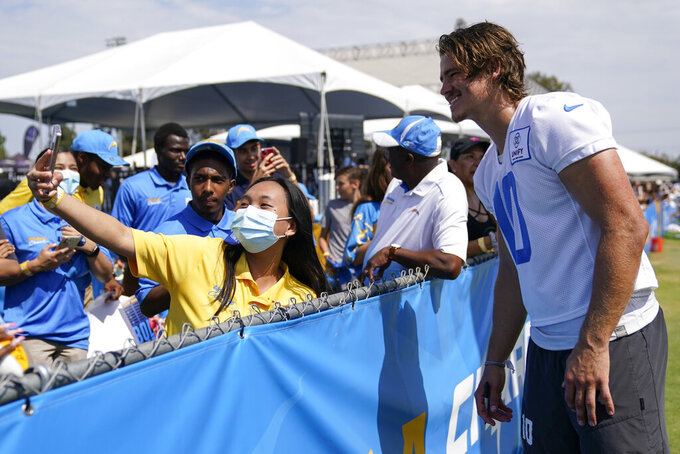 COSTA MESA, Calif. (AP) — Despite being the Offensive Rookie of the Year in 2020 and then reaching the Pro Bowl last season, Los Angeles Chargers quarterback Justin Herbert still has room to improve going into his third season.

Herbert is focused his footwork. He made it a major focus of his offseason program and has continued to hone in on it during the first week of training camp.

“I think all of the drops that tie into the routes — three-step, five-step, seven-step — and being smooth in progressions and going through all of the reads,” said Herbert about what he wanted to improve.

“I’m still experiencing the young aspects of playing in the NFL. I have a lot to learn, but hopefully a lot of room for improvement, as well.”

Footwork has been at the top of Herbert's improvement list going back to when he was preparing for the draft. He did not take any snaps under center during his four years at the University of Oregon.

Honing in on footwork took a little bit of a backseat last season as Herbert was getting up to speed with coach Brandon Staley, offensive coordinator Joe Lombardi and quarterback coach Shane Day.

Now that he's more comfortable in the offense, Herbert's work on his footwork has become a bigger focus.

“The evolution of that footwork is pretty cool,” Day said. “The second year, kind of once you have the offense down, then you can focus on the fundamentals. It’s been working through that progression of what’s best and me learning what his body does best too, because he’s a top quarterback. And then figuring out how to implement all that stuff as we go.”

Herbert's learning curve of learning how to operate under center is part of a process that most quarterbacks have to go through when they come into the NFL. With most high school and college programs running their offense out of the shotgun, the learning curve can be steep and often begins during the pre-draft process and the scouting combine.

Even with getting up to speed with a new offense, Herbert was one of the league's top quarterbacks last season. He tied Tampa Bay's Tom Brady for most 300-yard games (nine), was second in completions (443) and passing yards (5,104), and third in passing touchdowns with 38.

Herbert also has the most completions, passing yards, passing touchdowns and total TDs through the first two seasons of a career.

Center Corey Linsley and wide receiver Mike Williams said they have noticed Herbert being more vocal during the first week of camp.

“In the walkthroughs and out here in practice and everything, he is definitely in tune a little bit more with some of the suggestions that we’ve made," Linsley added. "From an adjustment standpoint, that’s something that he’s shown in the early few days of camp and even in the offseason in OTAs and stuff. We’re like, ‘Hey, man, if you see it, call it. We’re good. As long as we’re on the same page, we’re good. Make the call.’“

Herbert's biggest goal this season is to get the Chargers into the playoffs for the first time since 2018. Los Angeles looked as if it was going to get there last year before dropping three of the final four.

Being in the same offense for the second straight season is an advantage, but the Chargers have a tough start to the season. They host Las Vegas on Sept. 11 before a short week and trip to Kansas City for a Thursday night game on Sept. 15.

“You just have to compete and you have to execute when it matters most. Unfortunately, we fell short of that, but I think we have the team, and definitely the pieces," Herbert said.

"We’re miles ahead of where we were at this point last year, so now we’re focusing on things that are maybe a little more tough or challenging to tackle, but I think we’re where we need to be right now.”