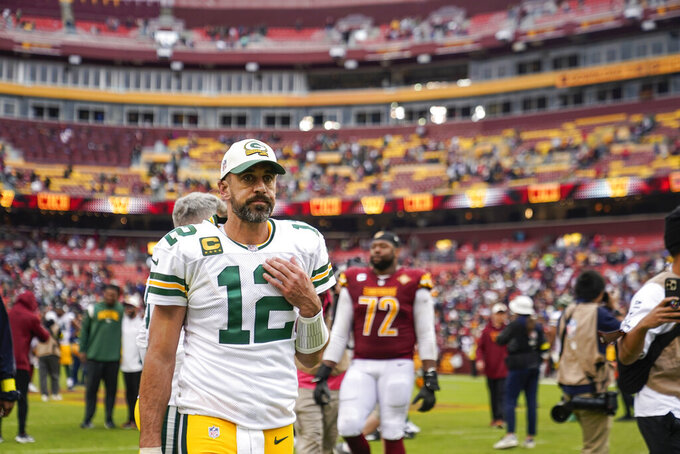 “You’re ... damn right it does,” the 38-year-old quarterback said Sunday after the Packers’ 23-21 loss at Washington.

Nothing the Packers have done the past few weeks backs up Rodgers' contention.

The Packers (3-4) have dropped three straight games and already have matched their highest loss total from any of coach Matt LaFleur’s previous three seasons. They’re 2½ games behind the Minnesota Vikings in the NFC North.

“I think collectively we’ve got to do better,” LaFleur said Monday. “We’ve got to coach better. Certainly the detail of how we’re doing some of the things we’re doing is just not to the level of winning football in the National Football League.”

Next up is a trip to Buffalo (5-1) to try snapping the AFC East-leading Bills’ three-game winning streak.

The Packers’ chances of getting back in the playoff picture would get a huge boost if Rodgers could recapture the MVP form of his 2020 and 2021 seasons. He instead is engineering the NFL’s 23rd-ranked scoring offense.

With Davante Adams in Las Vegas and Marques Valdes-Scantling in Kansas City, the Packers aren’t throwing downfield, enabling defenses to focus on stopping the run. Rodgers is averaging 4.2 air yards per completion to rank 34th among NFL quarterbacks. Injuries to the receiving group have limited Rodgers’ options.

Rodgers also was dealing with an injured right thumb and working behind a line that was missing left tackle David Bakhtiari and had other guys adjusting to new positions.

Rookie fourth-round pick Zach Tom made his first career start in place of Bakhtairi at left tackle, and the rest of the line had Elgton Jenkins at left guard, Josh Myers at center, Jon Runyan Jr. at right guard and Yosh Nijman at right tackle. Myers was the only person in that group who started at that same position a week earlier in a 27-10 loss to the New York Jets.

“I thought going against a pretty good front, I thought they played pretty well,” LaFleur said. “It wasn’t flawless by any stretch, but for the most part did pretty good. I know we were kind of getting the ball out really quickly in a lot of instances to not allow that front to wreck the game.”

After failing to get a takeaway in either of its past two games, Green Bay’s defense scored a touchdown on De’Vondre Campbell’s 63-yard interception return in the second quarter. It was only the second pass the Packers have intercepted all season. The Packers nearly got another defensive touchdown later in the second quarter, but an illegal contact penalty on Eric Stokes nullified Rasul Douglas’ 62-yard fumble return.

RB Aaron Jones scored both of Green Bay’s offensive touchdowns on receptions from Rodgers. ... Campbell had 12 tackles — three for loss — to go along with his pick-6. ... Rookie LB Quay Walker had a team-high 13 tackles.

OT Yosh Nijman committed two holding penalties. He also was called for an illegal blind-side block on the game’s final play, but that penalty was declined. ... Stokes had the illegal contact penalty that wiped out a touchdown and also was flagged for unsportsmanlike conduct. ... CB Jaire Alexander was beaten by Terry McLaurin on a 37-yard touchdown that put the Commanders ahead for good and a 12-yard catch on a third-and-9 conversion with just over two minutes remaining. ... WR Romeo Doubs had no receptions on four targets. After catching 19 passes for 184 yards and two touchdowns in his first four games, the rookie fourth-round pick has seven catches for 50 yards and no touchdowns during the Packers’ three-game skid. ... WR/PR Amari Rodgers’ fumbling issues continued as he fumbled a punt return, leading to a Commanders field goal. LaFleur said Monday that the Packers will evaluate their punt return situation this week.

OLB Rashan Gary left the game and was evaluated for a concussion. ... LaFleur said Monday that WR Allen Lazard hurt his shoulder during the game.

10½ — The Packers are 10½-point underdogs Sunday at Buffalo, according to FanDuel Sportsbook. According to Sportradar, the Packers haven’t been that big an underdog since Nov. 26, 2017, when the Pittsburgh Steelers were favored by 14½ and won 31-28 over a Packers team that started QB Brett Hundley in place of an injured Aaron Rodgers. Green Bay hasn’t been this big an underdog in a game started by Aaron Rodgers or Brett Favre since Oct. 2, 2006, when the Philadelphia Eagles won 31-9 as 11½-point favorites over a Favre-led Packers team.

The Packers prepare to visit Buffalo before finishing their three-game road swing Nov. 6 at Detroit.