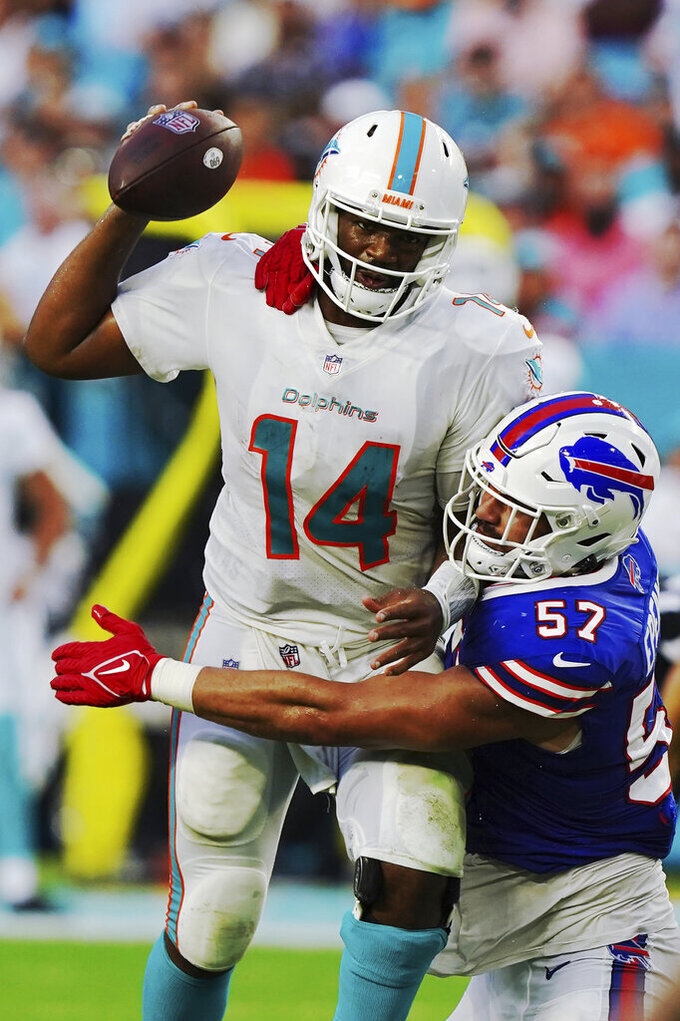 A battery of tests run on quarterback Tua Tagovailoa failed to show any serious problems other than bruised ribs, raising at least the possibility that he could play next weekend when the Dolphins (1-1) visit the Las Vegas Raiders (2-0).

Tagovailoa was knocked out of the Dolphins’ 35-0 loss to Buffalo on Sunday after just two series and eight plays. He ended up on the turf after three of those plays, sacked twice on the first series and then injured on the final play of Miami’s second possession. He was taken from the sideline on a cart and didn’t return, though the Dolphins have hope that he can play in Week 3.

Against the Bills, he clearly couldn’t go.

And those who could play simply didn’t go anywhere.

On every level, it was a Dolphin disaster. A sixth straight loss to the Bills, matching the worst such streak in Miami history. The biggest margin of defeat ever against Buffalo. The second-worst home shutout loss in team history. Only the fourth time the Dolphins lost to an AFC East opponent by 35 or more points.

“We know we need to be better,” offensive lineman Robert Hunt said. “We know we have some issues. We’ll come back and we’ll work to correct those issues.”

There was good news Monday, other than Flores sounding as if there’s at least reasonable hope of Tagovailoa playing this coming week — with a flak jacket to protect his ribs being a possibility.

Wide receiver Will Fuller, who missed Week 1 while completing a six-game suspension and missed Week 2 for a personal matter, was back with the Dolphins. Flores said he expects Fuller to practice this week, meaning his now twice-delayed Dolphin debut could come in Las Vegas on Sunday.

Takeaways. The Dolphins forced two more on Sunday, pushing their streak to 24 consecutive games with at least one takeaway. But to further illustrate how bad of a day it was against Buffalo, they wound up losing the turnover battle 3-2 — and that doesn’t even count the 0-for-4 effort on fourth-down conversion tries.

The offensive line. Tagovailoa played eight snaps; he was sacked on the first, sacked again on the third and then knocked out on the eighth. Jacoby Brissett played the final 3½ quarters and was sacked four times, meaning the Dolphins yielded six of those on the day. The last time Miami gave up six sacks and won was Nov. 1, 2009; the Dolphins are 0-17 in those games since.

Hunt. Yes, he’s on the offensive line. Yes, the offensive line was bad against Buffalo. But credit to Hunt for not sticking to a “we’ve got to watch the film”-type refrain postgame and being refreshingly honest instead. “We’re a young line, trying to improve. That’s no excuse. We can’t keep saying that,” he said.

The wide receivers. There was plenty of blame to go around Sunday, and the wide receivers didn’t do much to help Tagovailoa or Brissett. DeVante Parker, Albert Wilson and Jaylen Waddle were among those with drops, and Jakeem Grant fumbled a ball away deep in the red zone. Those miscues didn’t cost Miami 35 points, but obviously didn’t help matters.

1: That’s the number of Dolphins teams that started 1-2 or worse and went on to make the playoffs, which means history says this is a pivotal week for Miami’s postseason chances. The Dolphins are 1 for 22 all-time in that scenario (4.5%). When starting better than 1-2, they’ve made the playoffs 22 of 33 times (66.7%).

The Dolphins will go to Las Vegas for the second time in a span of five games dating to last season. Miami won 26-25 last Dec. 26, the Dolphins’ next-to-last game of the 2020 campaign.