Tua's practice targets: Tyreek Hill, and then his critics 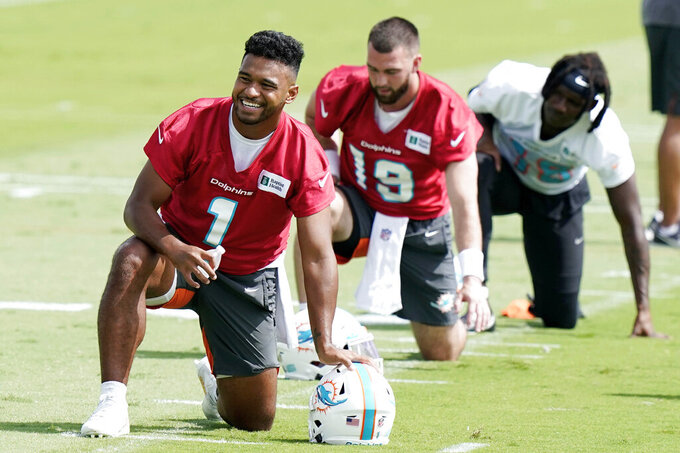 And afterward, Tagovailoa hit back at critics.

The third-year quarterback, aware that there are often questions — particularly on social media — about his arm strength and deep passing ability, went on the offensive about his abilities following the practice.

“Yeah, if you saw the third-to-the-last play we had, I don’t know if I could throw the ball downfield still, but by my account I think that might have been a touchdown to Tyreek,” Tagovailoa said.

“So however you want to write down any of that to social media or whatever outlets you guys are with, you do so.”

Tagovailoa’s two highlight passes to Hill during Thursday's practice each traveled at least 45 yards in the air. The first was good for 55 yards and a touchdown; the second went for 56 yards.

Tagovailoa had no completions of 50 yards or longer as a rookie in 2020 and three last season, though two — a 64-yard gain by Albert Wilson against the Baltimore Ravens and a 57-yard gain by Jaylen Waddle against the Carolina Panthers — came on short or intermediate throws with yards after the catch.

“Here’s the thing about quarterback that I always think is funny," McDaniel said. “You can only design plays that the quarterback has time to throw. ... I think he might have had a 55-yarder today. That’s why you hear no cause for concern at all from the players because they know that too. He’s plenty fast and the great thing is he sees the field."

Heading into his third season, there are questions as to whether Tagovailoa will be the Dolphins’ starting quarterback for the long term.

Some of the concerns involve his ability to throw downfield — though it should be noted that, after struggling Wednesday, Tagovailoa took ownership, saying that “practice wasn’t up to the standard that I know our offense can compete at and it obviously starts with me."

Through it all, comments or criticism or even praise, Tagovailoa says he’s blocking out the noise.

“For me, it’s just, zone that out,” Tua said. “I mean, we come out to practice, everyone else ... Twitter warriors, you know, keyboard warriors, whatever you want to call them, you know, they’re not out here practicing with us working hard. So I don’t know if you guys recorded that last one to Tyreek ... I don’t know about you, but that looked like money.”