Unbeaten Dolphins kick off Week 4 as underdogs vs Bengals 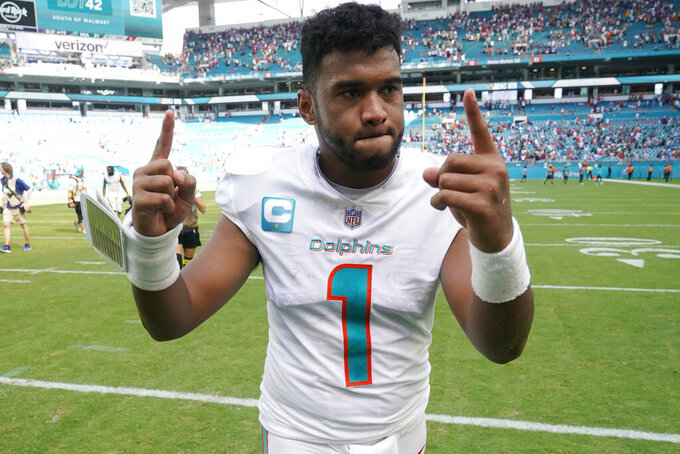 Tua Tagovailoa and the unbeaten Miami Dolphins are underdogs in Week 4.

The Dolphins (3-0) kick off this week’s schedule against Joe Burrow and the Cincinnati Bengals (1-2) on "Thursday Night Football."

The Bengals are 3 1/2-point favorites, according to FanDuel Sportsbook.

If a victory over the Buffalo Bills wasn’t convincing enough, perhaps a win over the defending AFC champion Bengals would prove the Dolphins are legitimate contenders.

“There are still some doubters, but we don’t really pay attention too much,” Dolphins running back Raheem Mostert said. “We just go out here and do what we got to do at the end of the day. Whether if it’s against a tough opponent or a not-so tough opponent, each week is a different challenge and each week is a different opportunity for us to grow.”

Tagovailoa is trying to play with an injured back on short rest. Dolphins coach Mike McDaniel said Tagovailoa would be questionable in a typical week. Miami has a capable backup in Teddy Bridgewater if needed.

Tagovailoa’s uncertainty makes this one easier to predict.

The Raiders are too talented to be stay winless after winning 10 games last season. Russell Wilson still hasn’t found a rhythm in Denver’s offense and rookie coach Nathaniel Hackett has made several head-scratching decisions. It’s an opportunity for Raiders coach Josh McDaniels to get his first win since Nov. 14, 2010, when he coached the Broncos.

Arizona (plus 2) at Carolina

The Cardinals have struggled in the first half and need to start games the way they finish them. They’ve won nine straight road games in the regular season. Kyler Murray should outduel Baker Mayfield in the battle between former Oklahoma quarterbacks.

Los Angeles Chargers (minus 5 1/2) at Houston

Justin Herbert is playing hurt, the Chargers are banged-up and they were blown out by the Jaguars last week. The winless Texans have been outscored a combined 30-0 in the fourth quarter this season.

Jacksonville (plus 6 1/2) at Philadelphia

Jalen Hurts and the Eagles are rolling. They dominated Carson Wentz last week and have another reunion against coach Doug Pederson, who led them to the franchise’s only Super Bowl title.

The 49ers have owned the Rams the past three years, winning six straight, though Los Angeles beat San Francisco in the NFC championship game.

The Saints, especially Jameis Winston, need to stop turning the ball over. The Vikings are still finding their offensive groove under new coach Kevin O’Connell.

Tennessee (plus 3 1/2) at Indianapolis

Matt Ryan rallied the Colts to their first win of the season in a comeback victory over the Chiefs. Now, he gets his first taste of this AFC South rivalry.

The Bears have won two games without testing Justin Fields too much. He’s thrown only 45 passes. The Giants have a short week after a tough loss at home to Dallas on Monday night.

The Steelers are sputtering offensively under Mitch Trubisky. The Jets have held a lead for just 22 seconds.

Jacoby Brissett is proving he’s more than a game-manager for the Browns, who rely on Nick Chubb and an excellent ground game.

Cooper Rush is 2-0 filling in for Dak Prescott this season. Carson Wentz tries to bounce back from a beatdown against the Eagles to face another familiar opponent.

New England (plus 10) at Green Bay

After beating Tom Brady and the Buccaneers, the Packers face the reeling Patriots.

Buffalo (minus 3) at Baltimore

Josh Allen and the Bills ran out of time last week in an exhausting game in Miami. Lamar Jackson is off to an MVP-caliber start.

The Lions are better than their 1-2 record. The Seahawks are exactly where they should be.

The Buccaneers are in hurricane upheaval, struggling on offense and facing a team seeking to get even for its loss in the Super Bowl two years ago.