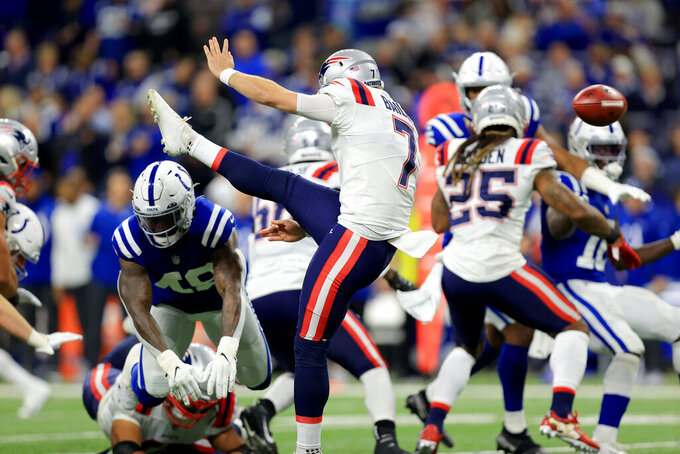 Indianapolis Colts' Matthew Adams, right, blocks a punt by New England Patriots punter Jake Bailey (7) during the first half of an NFL football game Saturday, Dec. 18, 2021, in Indianapolis. The Colts' E.J. Speed ran the ball back for a touchdown. (AP Photo/Aaron Doster)

Too many mistakes. Not enough plays being made.

As a result, the Patriots’ seven-game winning streak ended and their reign atop the AFC has at least been temporarily put on hold after a 27-17 loss to the rival Colts.

“Obviously we didn’t do anything well enough to win," Belichick said. “We didn’t play well, didn’t coach well. Penalties, interceptions, played from behind the whole game. Nothing really good enough. It’s disappointing but we’ll move on."

For a team and a coach whose success has largely been the result of consistency and precision over the years, this was about as stunning as it gets. The Patriots (9-5) didn't do much right.

Their first possession was derailed by two penalties that eventually forced them into third-and-long and a punt. The next series ended with a special teams breakdown that led to a blocked punt, which Colts linebacker E.J. Speed recovered in the end zone for a 14-0 lead.

A third consecutive punt helped Indy extend the margin to 17-0 and just when it appeared the Patriots might be getting their mojo back late in the half, Darius Leonard picked off rookie quarterback Mac Jones inside the Colts 5-yard line — the first red-zone interception of Jones' career.

The impact was crushing as the Pats' NFL record 99-game streak of scoring in the first half came to an end.

“It's frustrating, there's no excuse for it," special teams ace Matthew Slater said. “There's just no excuse for the way we came out, flat. Uncharacteristic penalties, basic stuff that we got beat on. Fundamentally not being sound. That's disappointing to come out and perform like that."

While Belichick tried to make some of his trademark halftime adjustments, nothing really worked.

Jones threw a second interception early in the third quarter that led to another Indy field goal and the penalties continued piling up. Safety Kyle Dugger was ejected after ripping the helmet off Colts receiver Michael Pittman Jr. Both players threw punches and Pittman was also ejected.

A false start on third-and-goal from the Colts 2 and a subsequent incompletion on the next play forced Belichick to settle for a short field goal rather than attempting to score a touchdown to make it a six-point game.

And the Colts (8-6) made the Patriots pay a stiff price for all the miscues.

“Our guys came ready to play and we played well in all three phases," Indianapolis coach Frank Reich said, who noted both teams were sloppy at times. “It wasn’t perfect in any phase but when you play the best teams in the league, that’s how you win football games."

And then after giving up 122 yards rushing in the first half, the Patriots made the biggest mistake of all when they needed a late stop to get one last chance.

But instead of taking Jonathan Taylor to the ground, New England overran the play, Taylor made a cut to elude the tackle and sprinted 67 yards with 2:01 left — sealing the Patriots' fate.

“We were making dumb mistakes, dumb penalties, false starts, delay of games, putting ourselves behind the chains," tight end Hunter Henry said after catching two TD passes. “It's hard to do against a really good defense and a really good front like that."