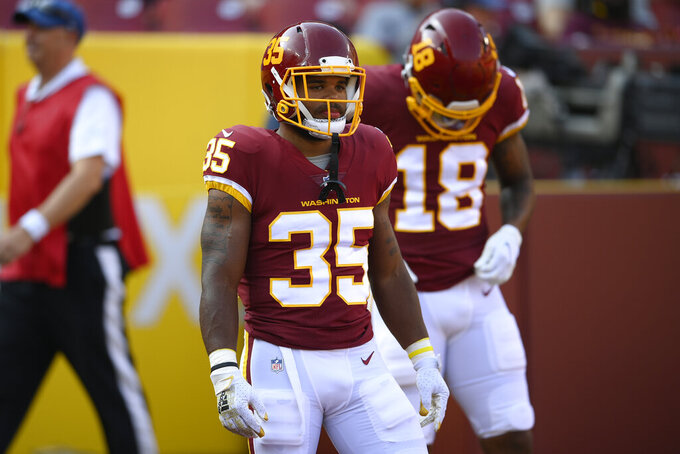 FILE - In this Aug. 28, 2021, file photo, Washington Football Team running back Jaret Patterson warms up prior to a preseason NFL football game against the Baltimore Ravens in Landover, Md. Patterson made the Washington Football Team thanks to an impressive training camp and preseason. Now the 5-foot-8 dynamo is getting praise from Barry Sanders and those who know him best expect Patterson to take the league by storm. (AP Photo/Nick Wass, File)

This was not like the tears of anger while losing a pickup basketball game in high school or the inconsolable disappointment of being turned down for scholarships to play Division I college football. In a moment of reflection, he allowed himself to appreciate the journey from under-recruited to undrafted after making it to the NFL with Washington.

“I just thought about the whole journey to here," Patterson said. “The journey’s just beginning.”

Patterson's journey has been full of doubters — his height at 5-foot-8 is where it begins, hardly the prototypical size for a workhorse running back. Now he's getting praise from Hall of Famer Barry Sanders, and those who know him best expect Patterson to run roughshod through the pros and silence criticism like he has at every previous level.

“There's no stopping him,” said Justin Winters, an assistant at Maryland’s St. Vincent Pallotti High School when Patterson played there. "If he gets the opportunity to do it, he’s going to take the league by storm.”

Chase Young expects that. Driving back from a workout this spring with former Pallotti coach Ian Thomas, the reigning Defensive Rookie of the Year called Ron Rivera and made his pitch for Patterson.

“He said, ‘Coach, y’all got to get Jaret Patterson — he’s going to be a guy for us,'” Thomas recalled. Minutes after the draft ended with 259 other players being selected, Young got his wish when Washington signed Patterson.

Young has known Patterson since eighth grade as “a dude who coaches were going to be able to count on. No off-the-field issues, showing up on time, just going to come to work every day.” He also saw what happened at the University of Buffalo, where Patterson tied the Football Bowl Subdivision record with eight touchdowns in a game and rushed for 1,072 yards last season before turning pro.

Again he was overlooked and faced an uphill battle to earn a roster spot.

“It’s just his story to be the underdog,” Winters said. “I’m not sure why, but it is what it is.”

Twin brother James Patterson, a linebacker who stayed for a fourth season at Buffalo, knows what it is: Jaret doesn't pass the so-called “eye test.”

“He always quote-unquote ‘fails it’ or doesn’t pass it all the way to some coaches’ and some people’s expectations because they’re so used to this type of player or this type of back,” James said. “But when he gets on the field and he does this thing, he makes the doubters into believers. That’s what he’s always done.”

It has become part of Jaret's identity. James said Jaret invents scenarios in his head to set barriers to knock down, and Washington camp was no different.

Sometimes, Patterson takes care of everything himself. A game from his senior year of high school sticks out.

With his team down 21 early against Riverside Baptist, Patterson told Thomas: “Don’t worry, I got this. I’m going to put it on my back.” He rushed for a couple of touchdowns, ran a kick back for a score and had a pick-six as part of his 558 all-purpose yards to lead an emotional comeback victory.

“You name it, he did it that game,” James said. “A lot of people saw what he really can be as an athlete on the field and the type of impact he does have on the field when he’s out there.”

Sanders saw it during Patterson's junior season at Buffalo and has been shouting him out on social media since. Hours after Patterson made the team, Sanders tweeted: “Excited to see what you can do... just not against the @Lions .. good luck @JaretPatterson.”

Patterson would like to meet up with Sanders but for now will take the kudos from one of the greatest of all time.

Buffalo coach Lance Leipold knew from his sophomore season that Patterson was special. Now at Kansas, Leipold marvels at Patterson proving everyone wrong.

“His size and things like that — unfortunately, he’ll always probably have his share of doubters,” Leipold said. “But I've said it a long time: Don't bet against him.”

Washington is betting on Patterson, the second-string running back on the roster, and someone offensive coordinator Scott Turner called a “natural runner.”

“He’s got a low center of gravity, and he’s got strength along with the quickness,” Turner said. "He makes quick decisions. The ball goes where it’s supposed to go, and then he has the ability to make yards when it’s not there."

On the field, general manager Martin Mayhew said Patterson's compact frame can let him hide from linebackers before bursting through a hole. Winters said it's Patterson's quick feet that set him apart.

Work ethic does, too. James said his brother overcoming obstacles has inspired him to try to do the same, and teammate Sammis Reyes whose locker is next to Jaret's, called him the illustration of "heart over hype." There's now plenty of hype, but Patterson seems to have the right mix of confidence and stubbornness to ignore it.